The Labour party’s recent Brexit capitulation is a betrayal of Labour supporters who voted Leave and were promised in the 2017 election that the party would respect the majority’s decision. It has also proven that the Labour Party cannot be used for genuinely transformative ends and it heralds the end of Corbynism as a political project, argues Lee Jones (QMUL).

The Labour Party’s decision to demand a second EU referendum and campaign for Remain is a huge slap in the face to the some four million, mostly working-class, Labour supporters who voted Leave and were promised in the 2017 election that the party would respect the majority’s decision. But the working classes are well used to being betrayed and abandoned by Labour. Between 1997 and 2015, Labour lost almost four million votes at a time when the total population increased by seven million. Many voters, disillusioned by neoliberal consensus politics, disengaged from politics altogether, while others drifted towards UKIP and the Tories.

But Jeremy Corbyn was supposed to be different. He enthused large parts of the country yearning for change, especially a youthful following who were becoming aware of socialism for the first time. Through the process of having to win the leadership twice, these supporters have learned first-hand the importance of democracy. This, plus growing awareness of Labour’s strong tradition of left Euroscepticism – once championed by Corbyn himself, and by John McDonnell – has even won some over to a “Lexit” position.

So, it must be especially galling and confusing for them to see Labour throw out its general election pledges and trample over its commitment to respecting the largest democratic mandate ever produced in the UK’s history. They may not yet realise it, but Corbynism is now dead. Corbyn may remain in place, for now, like a Soviet-era waxwork, but the transformative project he claimed to spearhead has melted away.

Electorally, Labour’s decision is disastrous. Richard Johnson has shown that Labour’s only realistic pathway to a parliamentary majority lies through Leave-voting constituencies. The party has now thrown away any hope of winning these. However many times Corbyn insists that the “real division” is not between Leave and Remain but the many and the few, the truth is that Britain’s principal cleavage today is Brexit: identification with Leave and Remain vastly exceeds identification with the political parties. Labour has already lost 14 percent of its 2017 supporters to the Brexit Party. I have lost count of the number of times that even loyal Labour voters have told me that if the party shifted to Remain, they would never vote for it again. I would be surprised if Labour could form a majority government again in the next two decades, if ever. Conversely, it is not implausible to suggest that, if Boris Johnson were to call a snap election on a no-deal platform, he could achieve a substantial majority. The Labour Party would doubtless like to spend the entire campaign trying to avoid talking about Brexit, but they cannot repeat this trick again now they have formally flipped.

Labour’s decision has, of course, been a long time coming: it results from its structural transformation from a party of the industrial working class to one dominated by the state-dependent middle classes and rump public-sector trade unions. This has left the party straddling two distinct social bases: the relatively socially conservative, working-class heartlands, increasingly battered by neoliberalism, left out and left behind; and the metropolitan middle classes who have either prospered under neoliberalism, or at least share the cosmopolitan, left-liberal values promoted by the increasingly professionalised, middle-class party elite.

This uneasy, unbalanced coalition – always tilted towards the left-liberals – has been strained to breaking point by Brexit. Despite attempts to muddy the waters, it remains true that the working classes overwhelmingly backed Leave, while the middle classes leaned towards Remain: the referendum was far more class correlated than general elections have become. For all Corbyn’s supposed difference from New Labour, his approach to Brexit has been the Blairite one of triangulation, trying to keep both groups happy. But this resulted in the frankly childish policy of refusing to support any Brexit deal that did not duplicate the exact same benefits as EU membership – a logical impossibility – which would therefore eventually unravel into a Remain position. Corbyn masked this for as long as possible by insisting on a general election, rather than an immediate second referendum, but the underlying drift towards Remain has been obvious for well over a year. And as soon as Labour started haemorrhaging middle-class support to the Liberal Democrats and Greens, as in the recent European elections, the left-liberals went for the kill.

In many ways, then, this outcome was preordained. It was this liberal-left faction within the party that, immediately after the referendum result, began agitating for the result to be ignored, blaming the outcome on everything from racists to Russian bots and slandering many of their own voters in the process. They married this revolt against the electorate with a rebellion against their elected leader, resigning en masse and precipitating a leadership election. This faction was only temporarily quelled by Corbyn’s re-election and the surprise 2017 general election result. Ultimately, this left-liberal element of the party is politically dominant because it represents the outlook of the public sector union leaders and the largely middle-class party membership who are pro-EU. Their will has prevailed.

Corbyn might have delivered a different outcome if he was a better strategist and properly understood Brexit as a pivot for democratic transformation, rather than a distraction from his anti-austerity agenda. He might have supported grassroots deselection campaigns rather than cutting off Momentum at the knees. He could have developed a positive, socialist platform for Brexit, to win over metropolitan voters and prevent the hardening of Remain as a political identity. But he did not. Perhaps he and his advisers understood that they would always have been fighting an uphill battle against the interests of his base in the party, and so they ducked it.

It remains just about possible that if the Tory vote remains seriously split by the Brexit Party, a Corbyn government might just slip in on a reduced turnout among a demoralised electorate. But even if that happens, the transformative programme that Labour claims to want to implement will not happen. It is now dead in the water, because its key elements are simply not deliverable within the neoliberal straitjacket that is the European Union. Nationalisation, a key Labour promise, is ruled out by the EU’s liberalisation directives, which are virtually impossible to change. Altering the Treaties that lock in neoliberalism is likewise impossible. Those arguing that Labour can “Remain and Reform” simply ignore the processes by which EU rules must be changed, which have been made deliberately impervious to even mildly social democratic reform, let alone socialism.

Those who realise this now advocate “Remain and Revolt” instead, but do not seem to realise that they are advocating a revolt against the British courts, which actually enforce EU law. If Labour has no appetite for leaving the EU, it certainly has no appetite for open warfare against the domestic judicial system. Moreover, any Labour government enacting a wholesale transfer of power from business to workers –which McDonnell claims to want – would immediately face intense resistance from capital, in the form of legal challenges (which, within the EU, they would inevitably win) and capital flight (which, in the context of the EU’s free movement of capital, could not be stopped).

Pointing out these facts has no impact on the “Remain and Reform” crowd, who steadfastly ignore reality and decline to spell out the mechanisms by which they could achieve meaningful change. The only possible conclusion is that they know that reform is impossible, and so “Remain and Reform” really just means “Remain”; it is just a fig leaf attached to a policy of the status quo. It is designed to allow those identifying as far-left to continue to associate with a project that has now been thoroughly captured by the left neoliberals and big business interests who want nothing to change.

The only logical conclusion is that they are not serious about their proposals to radically transform Britain. They are play-acting at revolution, ejaculating about “fully-automated luxury communism”, while actually facilitating a retreat towards an increasingly authoritarian, Blairite centrism. They may achieve slighter higher government spending, but certainly nothing more transformative than that. McDonell’s commitment to “fiscal credibility” clearly foreshadows the constraints being established.

Clearly, Labour is heading the way of Syriza: a supposedly radical, left-populist movement that promised genuine transformation but ended up enacting EU diktat, destroying popular faith in the left and paving the way for the return of the oligarchic right. The ludicrous reactions of faux-leftist Remainers to Syriza’s capitulation and defeat show us exactly how Labour’s own Syrizafication will be excused: they will be praised for a supposedly noble failure and, at least, for having fended off the supposed (but in fact, in the UK context, entirely imaginary) threat of “fascism”.

Corbyn’s youthful supporters now face a fateful choice. The clearer-sighted among them will already see that the preceding analysis is true. Their loyalty to Corbyn will tend to push them towards remaining onboard, hoping that, if he can just be elected, he will make the country a better place. But Corbyn is just one politician – and not a terribly good one, at that. The wider conditions for implementing his project have just gone up in smoke. Electorally, the Labour Party can no longer form a government; practically, the programme cannot be implemented inside the EU. Making radical changes to British capitalism requires not just a favourable prime minister but a massive socio-political mobilisation capable of battling at every level, through every institution. The left was far better organised and mobilised in the 1980s, the last time such a programme was proposed, and still lost. Today, that mobilisation barely exists; indeed, this latest betrayal will only deepen popular cynicism and demobilisation.

The truth is that Corbyn’s project is dead. His young supporters now face being used as ground troops in a war for an objective they do not want. Will they allow themselves to be abused like this? I would hope not, but history does not inspire optimism. I am now old enough to have seen two generations of idealistic young activists – some of them close friends – sucked into the Labour Party on the premise that they could shift it leftwards and help to enact meaningful social transformation. The Party has fed on their youthful energies like a vampire, feeding on their lifeforce to keep its undead machinery staggering forwards, preventing any genuinely radical alternative emerging. But the Corbyn project has been a natural experiment: it has proven that the Labour Party cannot be used for genuinely transformative ends. If the left cannot break from it now, and strive to create something new, it will be Syrizafied along with the party itself.

This post represents the views of the author and not those of the Brexit blog, nor the LSE. Image by @RochDW.

Dr Lee Jones is Reader in International Politics at Queen Mary University of London and a co-founder of The Full Brexit network. 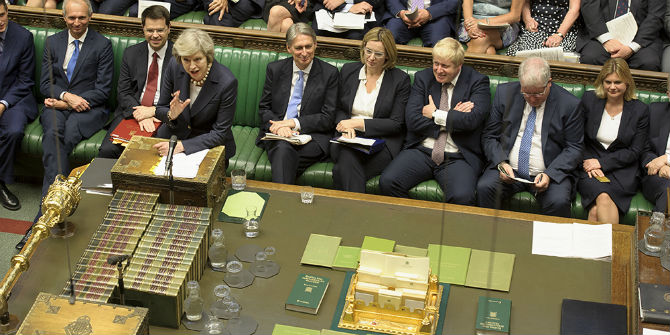