Labour’s electoral defeat falls in between the Leave and Remain ideological poles, writes Raluca Bejan (St. Thomas University). She explains that while austerity is partially to blame for the result of the recent general election, so is the nationalist, anti-immigrant rhetoric that pervades British society.

The results of last week’s general election in the United Kingdom came as a shock. The initial polls predicted a ‘knife-edge’ result, with a prognosticated vote difference of just five points. However, the Conservatives not only won, they won with a majority, securing 365 out of the 650 seats in the House of Commons. Stuck at 203 seats, Labour suffered one of its biggest electoral defeats ever.

At a time when the Labour Manifesto detailed concrete steps to gear the British economy towards benefiting the working class, to support strong state investment in the public sector and to develop a Universal Basic Income pilot project, measures that would have tackled UK’s inequality rates — the worst in the developed world — the electorate decided that inequality and poverty are secondary to the Brexit saga.

Labour’s defeat was attributed by ‘Lexit’ supporters (those advocating a left-wing exit from the European Union (EU)) to the party’s refusal to stand by the EU referendum results, and failing to represent the interests of the Leave faction.

Indeed, Labour lost about ten points in the areas that had cast strong Leave votes in the 2016 referendum. Yet it lost six points in the Remain constituencies as well. It is farfetched to claim that the British electorate, disillusioned by austerity, voted for Brexit in 2016, and then, aiming to avoid at all costs any compromise on Brexit, voted for a party that will only further entrench austerity.

A vote of the rich

Things are much more complicated than simply assuming that working-class people are an idiotic mass of voters, with little agency and without the intellectual capacity to weigh their own material interests.

First, the 6% drop in the Labour vote among Remainers proves that the election results were not solely dependent on the Leave camp. Data from the Brexit vote shows that Remainers are doing relatively well, financially speaking. It also appears that they represent a segment of the British electorate who would rather have Brexit any day than elect into power a party that will tax their assets, redistribute wealth and care for the country’s poor.

Second, it is impossible to find a clear relation between austerity and the election results. Years of longitudinal research to measure electoral attitudes pre- and post-austerity would be needed to substantiate such claim.

While the 16% drop in the Labour vote (compared to the 2017 election) in Bolsover, a Leave constituency that has been voting Labour for close to 70 years, would most likely make for a strong argument among Lexiters, the overall picture is much more complicated. Bolsover is indeed an economically deprived area. In the 2015 English Indices of Deprivation – an official measure using income and employment deprivation; education, skills and training deprivation; health deprivation and disability; crime; barriers to housing and services; and living environment deprivation – Bolsover ranked the lowest among Derbyshire’s districts and in the bottom quintile of the most deprived districts in the entire country.

Yet there are other economically deprived areas that did not vote Conservative. Barking and Dagenham, for example, which similarly voted Leave in the EU referendum, ranks as the second poorest London borough. However, it voted Labour in the recent election: in Barking, Margaret Hodge won with almost three times the number of votes as the next closest candidate, while Dagenham and Rainham elected Labour candidate John Cruddas by only a few hundred votes more than his Conservative opponent.

Havering, however, the London borough that voted Leave in the 2016 EU referendum, puts things back at square one: both of its constituencies (Romford and Hornchurch & Upminster) went Conservative. Unemployment doubled in Havering between 2008 and 2014, but the high rates of unemployment do not tell the whole story.

Demographic changes in Havering indicate an increase in the proportion of EU citizens in the area, from 1% in 2001 to 7% in 2011. This increase is primarily due to immigration from Eastern Europe after the 2004 and 2007 waves of EU enlargement. There was also an increase in the proportion of immigrants from Africa in Havering, from 2% to 8%. The 2016 Brexit vote was grounded in a strong anti-immigrant rhetoric. In fact, immigration was one of the negotiation points that David Cameron brought to the EU table prior to requesting the referendum vote. It is not much of a stretch to associate the changes in the demographic composition of the borough with the numbers in the referendum and the subsequent electoral results.

The British Election Study conducted in 2016 asked respondents to identify, in their own words, what mattered most when deciding on the referendum. About 15,070 unique answers were collected. Responses were aggregated into ‘word clouds’ and displayed using the frequency of the words to create a visual scaling. As seen below, there is no empirical ground to doubt that Brexit was a vote against immigration:

Some could argue that Labour disappointed its electorate, since for years it had neglected their concerns of poverty, inequality and social deprivation. This electorate, perhaps, did not feel that structural changes would be achieved within the institutional confines of the EU. Yet others could equally well argue that Labour was voted down on grounds of nationalism and anti-immigrant sentiment.

Yes, austerity is partially to blame for the results of the recent general election. But so is the nationalist, anti-immigrant rhetoric that is ever-present within British society. Those eager to yell about one should also be willing to yell about the other. 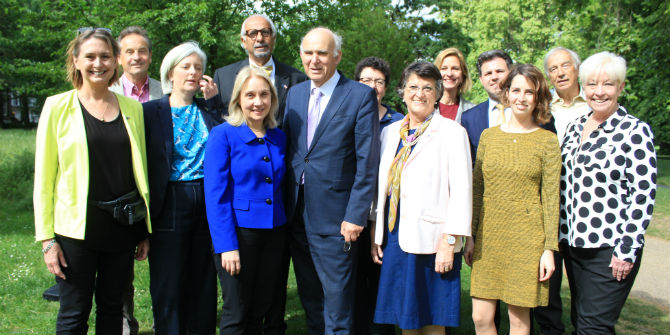