Yes, Brexit was key to the 2019 General Election campaign – but it wasn’t all that voters wanted to hear about. Tristan Hotham (University of Bath) analyses Facebook advertising in the run-up to the vote and finds that while the issue proved an asset to the Conservatives and a liability to the Lib Dems, Labour tried to ignore it.

On the night of 12 December, we saw Labour’s share of seats in Parliament fall to the lowest level since 1935, and the largest Conservative majority since 1987. The  polling was correct. Labour had fallen back, the ‘red wall’ was smashed, Corbynmania was absent. The Liberal Democrats had failed to make an impact, piling up worthless votes in Remain seats while losing their leader. The Conservatives’ polling, meanwhile, remained steady,  boosted by the Brexit Party’s decision to stand down in Tory seats.

Brexit was clearly key to this election. But what does the parties’ Facebook advertising tell us about the part it played in the contest?

20,546 adverts (Graph 1) were sent by the major parties’ pages (Conservatives, Labour, Liberal Democrats and Green Party) alongside Jeremy Corbyn’s and Boris Johnson’s pages, between 1 November and 9 December. In other words, just six political pages sent a colossal amount of political content covering many areas from healthcare to the economy (see here for an early analysis). The number of adverts sent does not represent the spend: as such, Graph 2 outlines how much the parties spent on Facebook in this period.

The Conservatives and Liberal Democrats sent by far the most adverts across the month, with Labour trailing far behind. The latter stuck with content for long periods, while the other pages generally shifted approach more often through A/B testing. 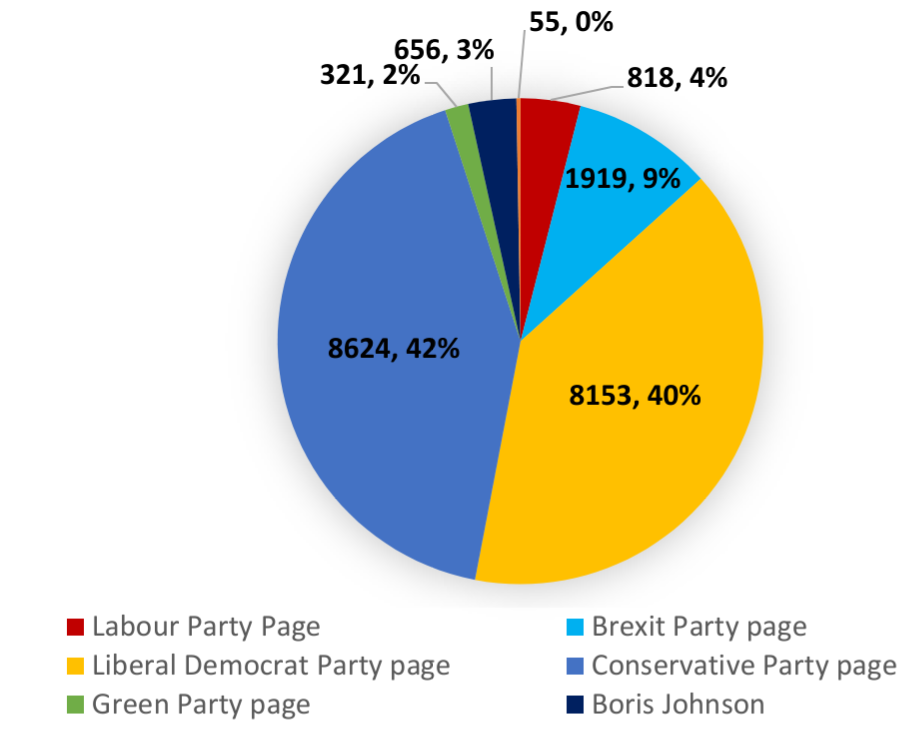 It is important to note that Labour was spending by far the most on a far smaller selection of adverts. The Conservatives, meanwhile, were consistently churning out fresh Brexit-related advertising (Table 1). 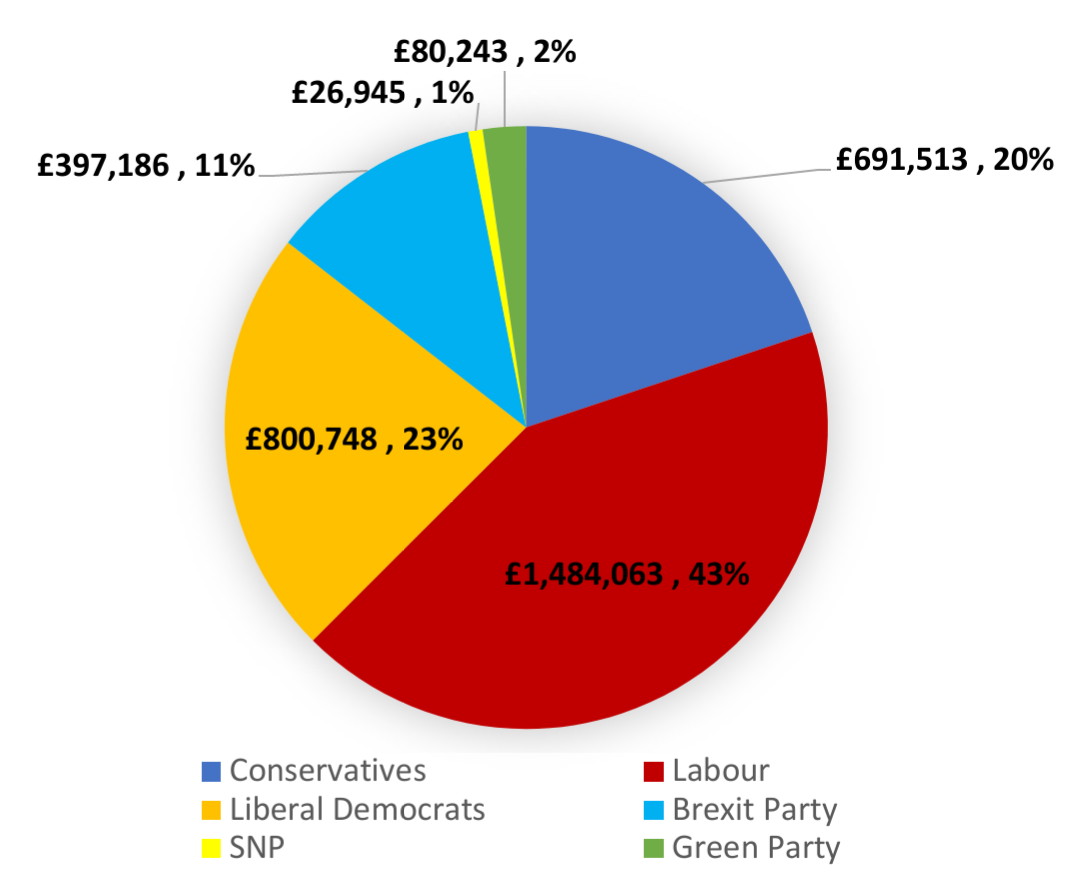 I searched the body text of all 20,546 ads for the use of the terms European Union, EU, Europe, Remain, Leaver, Remainer, Leaver and Brexit. Was this a Brexit election? The answer is yes. Nearly half (48%) of all the ads sent by these seven pages referred to Brexit, indicating how central the issue was to the election. However, the percentage of Brexit-related ads varied considerably by party. Some parties avoided the subject (Labour), while for others it was their sole focus (Brexit Party).

The Conservatives were surprisingly nuanced in their approach, with the party page not mentioning Brexit as much as one would expect. Instead, the party pushed Brexit content via Boris Johnson’s page. Nevertheless, the Conservatives still sent 2017 Brexit related adverts over the one-month period. This was less than the Liberal Democrats (3525) but more than the Brexit Party (1846). The party was talking about other things – the leadership of Jeremy Corbyn, but also the NHS and policing – and grasped that while Brexit was central to this General Election, it was not the only issue going. The Lib Dems failed to appreciate this. The Conservatives also grasped that the best tool they had at their disposal to reach Labour Leavers was the former face of Vote Leave, Boris Johnson. Equally, his ‘Marmite’ character was a turnoff for Remain-voting areas. 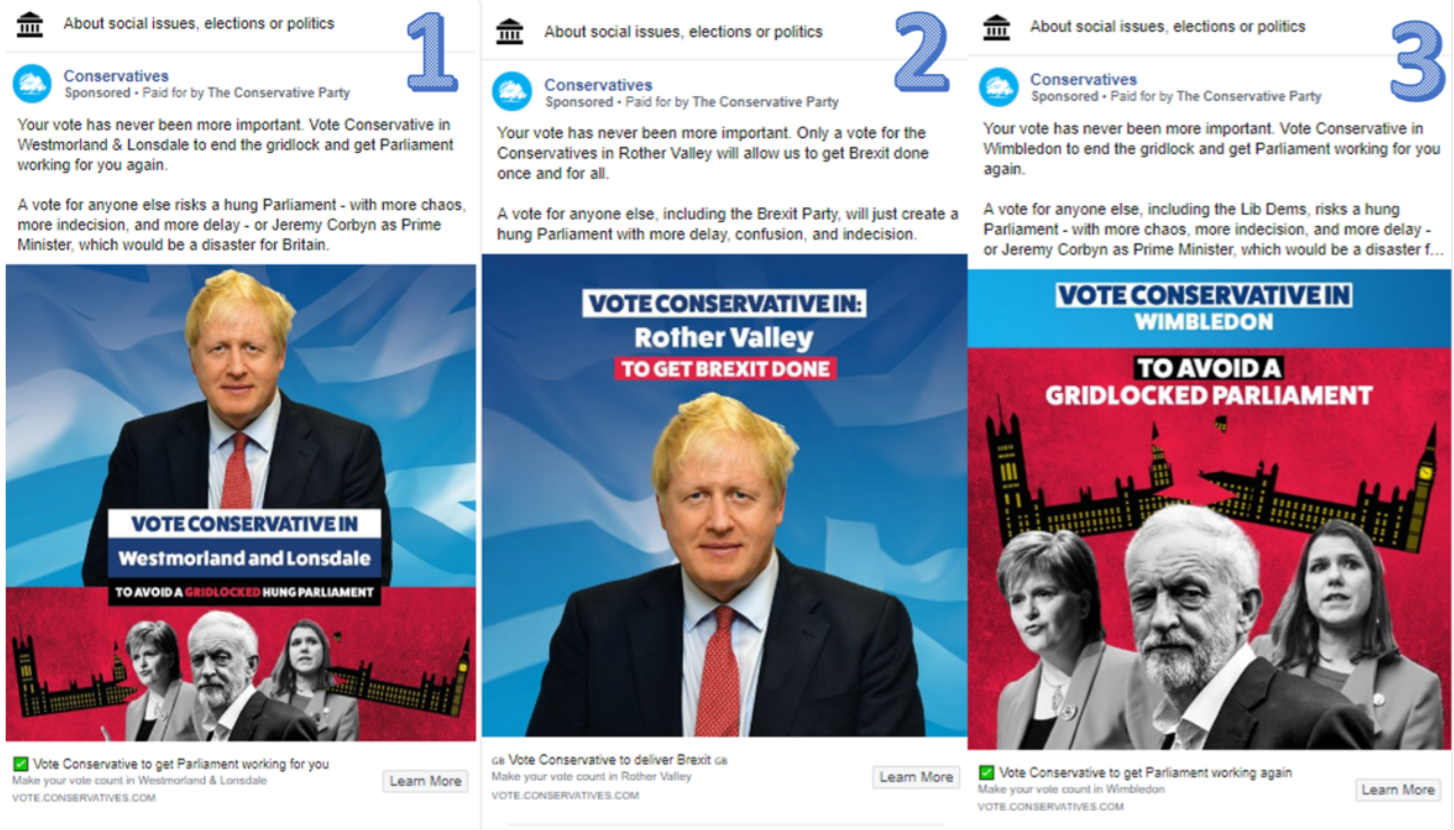 In contrast, Labour avoided the subject. Only 15% (122) of their party page adverts covered Brexit, and Corbyn avoided it completely. This repeated their approach in 2017, but this time it failed as they had since pivoted to support a second referendum. The limited content about Brexit was stagnant and unchanging, and it was clear the party would have preferred to avoid the issue altogether.

The Labour party was trying to walk a very difficult tightrope between covering and discussing their Brexit position, and ignoring it completely. Labour was split between an electorate who wanted Brexit and those who saw it as an anathema, and its attempts to walk a tightrope between the two failed abjectly. The Conservatives, on the other hand, managed to weaponise Brexit alongside other topics, through a strategy that appreciated nuance, colourful and changing content and a determination not to get bogged down in a single issue.

Tristan Hotham is a PhD researcher at the University of Bath. His thesis is titled “Examining the impact and effectiveness of Facebook on party campaigns”.