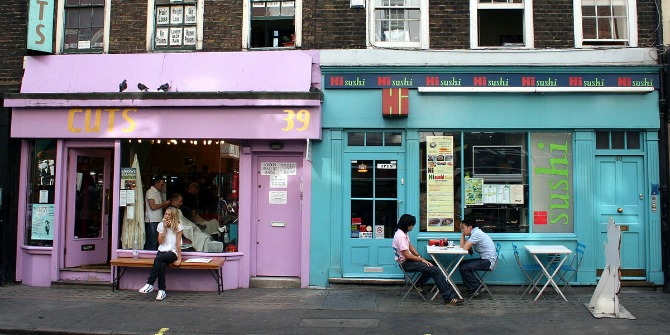 There are many issues that will weigh in the minds of UK voters in the run-up to the referendum on membership of the European Union (EU) on 23 June. Many people feel that they are oppressed by a remote, undemocratic super-state that can over-rule UK laws. Others believe that the EU promotes better co-operation between communities that were at war for centuries. These views often stem from deeply held political and moral beliefs.

Economics can make a contribution to the debate by considering what might be the material costs and benefits of leaving the EU. If there are economic benefits, then for Eurosceptics it’s a win-win. On the other hand, if there are economic costs to Brexit, then even a die-hard Leave campaigner must consider whether the price is too high. Some might be prepared to pay any cost: for them it is ‘death before enslavement’. To most people however, it’s not so all-or-nothing. They will look at the likely costs and benefits, and this will help to inform their decision.

An obvious benefit of Brexit is that the UK will not have to send so much money to Brussels. This is around 0.31 per cent of our national income. An equally obvious cost of Brexit is that trade between the UK and the EU will be lower if the UK leaves than if it stays.

The degree to which trade costs will be higher outside the EU is a big question. But it’s a fact that even when countries have comprehensive trade deals, there can still be non-tariff barriers due to regulatory differences, border checks, rule of origin requirements and anti-dumping actions. Even Norway, which as a member of the European Economic Area (EEA) signs up to all the single market regulation and does not face border checks, has lower productivity than would be expected if it were a member of the EU (Campos et al, 2015).

There is a rich menu of economic models to analyse the impact of trade arrangements, but it turns out that most of them have a pretty similar structure when it comes to thinking about welfare gains. We develop a state-of-the-art trade model plus industry-level data on exports and imports covering all sectors of the economy in every country in the world. This, plus an estimate of how trade responds to costs, enables us to figure out how trade patterns and living standards will change when trade costs (tariff and non-tariff barriers) change after Brexit.

Since it is hard to know precisely how trade costs will change after Brexit, we look at two stark scenarios. An ‘optimistic’ scenario is that the UK swiftly strikes a deal so that it gets deep access to the EU single market, just like Norway (in which case the fiscal savings from a lower EU contribution will be negligible at 0.09 per cent of GDP). A ‘pessimistic’ scenario is that the UK is unwilling to accept the free movement of labour and the associated regulations that are part of the ‘access price’ to the single market. In this case, it will be a member of the World Trade Organization (WTO) only, facing the usual EU external tariffs, and trade will fall by more.

Figure 1 shows the results of our analysis. There is a drop in income per person of 1.3 per cent in the optimistic case, which doubles to 2.6 per cent in the pessimistic case. This translates to a fall of between £850 and £1,700 per UK household per year. 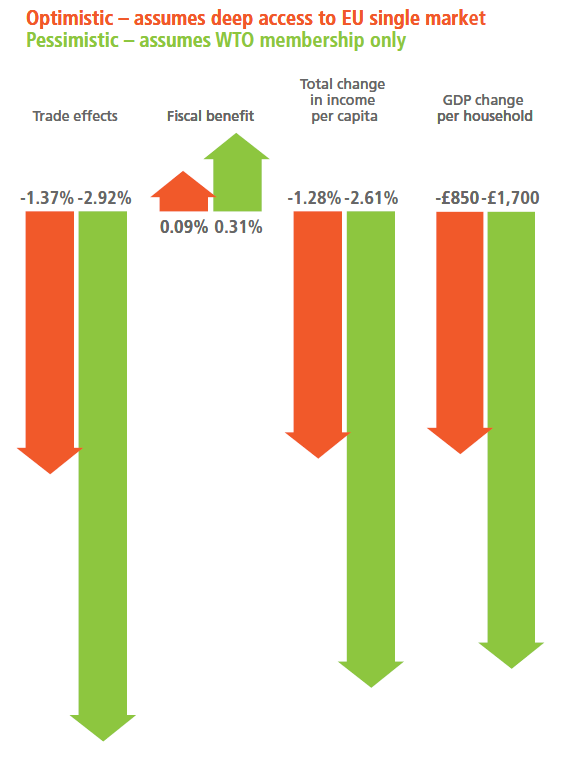 An alternative ‘back of the envelope’  way to estimate the effects of Brexit is to  look at what actually happens when  countries joined the EU compared with  being in free trade areas like the European Free Trade Association or the EEA (Baier et  al, 2008). The trade effects are big – a  jump of a quarter or more. Combining this with estimates of the impact of trade on GDP from real falls in trade costs leads to  an implied fall of UK national income of  between 6.3 and 9.5 per cent (see Figure 2).  This is similar to the 8-10 per cent range, which  other researchers estimate to have been the historical benefits of the UK joining the EU (Crafts, 2016). 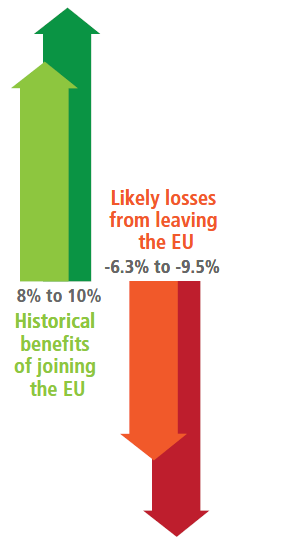 This tripling of the costs of trade loss is also consistent with economic research comparing the actual benefits of trade  liberalisation (big) with those predicted from static models like those presented here (much smaller). Naturally, UK trade with the EU does not disappear in any  scenario – there remains a ‘trade deal’ in  all cases. It is simply that there is less trade than there would have been had the UK  remained a member.

It makes little sense to point to a decline in the EU’s share of total UK trade over the last decade as evidence that the single market has ‘failed to reduce trade costs’. This decade has witnessed the rapid growth of Asian trade powerhouses as well as the worst global economic crisis since the Great Depression. UK trade with Europe has increased since 2000; it’s just that trade with China has increased much faster.

Is the optimistic case too pessimistic? How could things turn out better?

First, could the UK negotiate a sweetheart deal much better than Norway or Switzerland have managed? This seems unlikely. About half of the UK’s exports go to the EU, whereas only 10 per cent of the EU’s exports are destined for the UK, so the bargaining power is lopsided.

What’s more, the EU will not want to be seen to be offering generous rewards for leaving, as this may encourage other members to do the same. In addition, all this assumes that everyone is behaving reasonably and rationally – unfortunately divorces tend to be much messier. Kicking the EU when it is undergoing a major refugee crisis and a long-running monetary crisis might provoke some very grumpy outcomes.

Second, could the UK strike better trade deals with non-EU countries like China, India and the United States than with the EU? Although the UK will not have to compromise with other EU members when doing such deals, it cannot offer access to the biggest single market in the world as the EU does (UK GDP is under a fifth of the size of the single market). The EU is in the final stages of negotiation with the United States and Japan on deals that are estimated to increase real household income by 0.6 per cent (Breinlich et al, 2016). If the UK cannot replicate these deals (and the United States has stated that it is not interested in a UK-only deal), this will be a further income loss on top of our estimates.

Finally, what about the promised bonfire of ‘red tape’ when we leave the EU? Being outside the EU would enable the UK in principle to jettison some irritating regulations. But it’s worth bearing in mind that being in the EU has not stopped the UK from having one of the most flexible product and labour markets in the OECD (behind only the United States and sometimes Canada).

The real question is whether much better regulation will really be forthcoming after Brexit. Eurosceptics often claim that ‘the 100 most burdensome EU regulations have been estimated to impose annual costs of £33.3 billion’. But what they neglect to mention is that the government impact assessments they cite also estimate that the same 100 regulations bring benefits to the UK of £58.6 billion per year (Booth et al, 2015).

It’s been argued that by getting rid only of those regulations where costs are deemed to outweigh benefits, 0.9 per cent of GDP could be saved. About half of this is estimated to come from the Renewable Energy Strategy and the Working Time Directive. It’s unclear that tearing up these environmental and employment protections will be politically feasible or really as economically beneficial in the long run as the impact assessments find.

Many people may decide that knocking a grand or two off their salary or pension is worthwhile to get Brussels off their backs. Some – though probably fewer – might even say the same if the bill rises to over £6,000 a year. These are reasonable positions and every voter will make up their own mind over the price they are willing to pay.

But those who say that leaving the EU is a win-win because Britons will both feel more free and become a lot richer are not being candid about the evidence. The standard trade models given here, calculations from trade and income differences of being in and out of the EU and also historical assessments show a consistent picture – Brexit will cost. The only question is ‘exactly how much’? 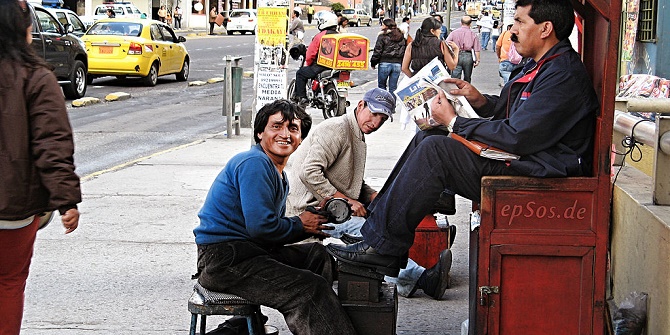 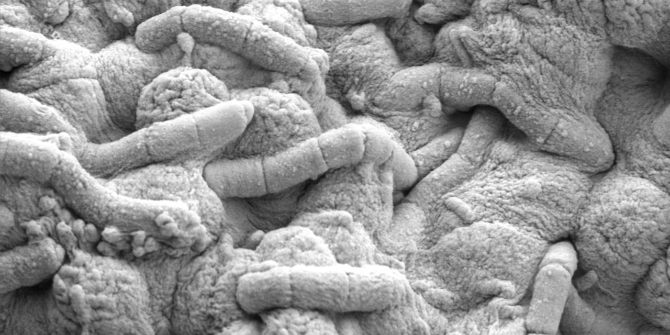 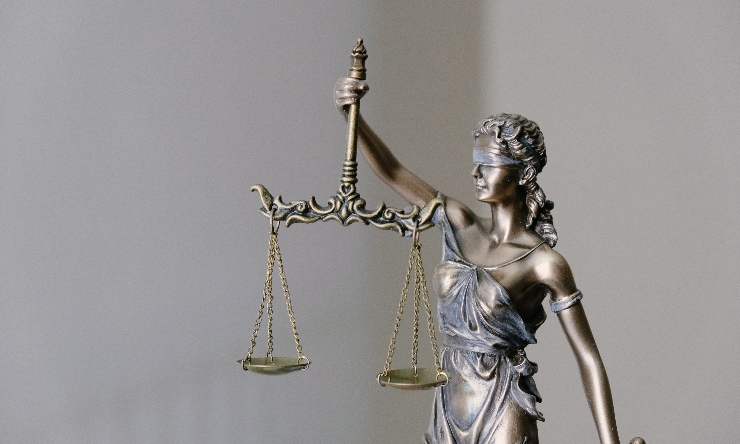 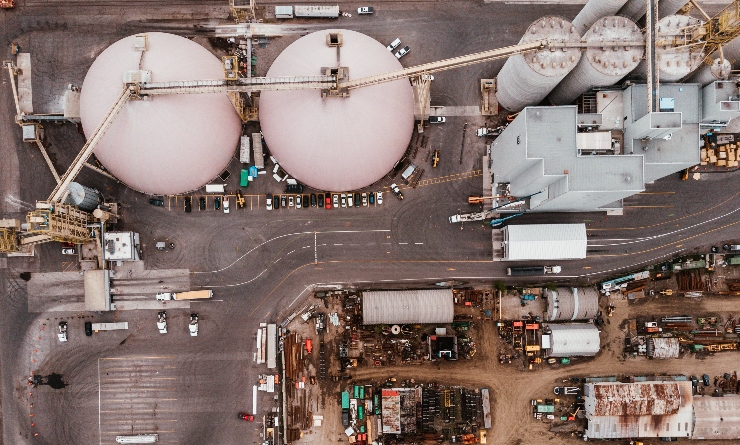