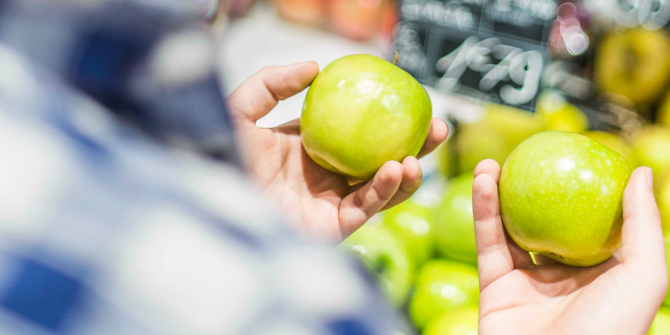 What’s at stake: After years of deflationary pressures and anaemic economic performance, inflation seems to be on the rise again, both in the US and the euro area. Does this comeback mark a return to target? Will it be sustained, and what should central banks be thinking? These are among the questions raised in the blogosphere.

Dieter Wermuth is happy that inflation is back in Germany, with the consumer price index hitting 1.7% in December. He states that if prices increase monthly by 0.2% from now onwards, the HICP will increase to 2.2% or 2.3% in February on a seasonally adjusted basis. It will not fall under the 2% line if these monthly price hikes continue.

The real question is whether these increases will prove sustainable. For this, wages – the biggest cost factor, would have to move a bit more. But wages are not increasingly rapidly. This is despite increases in employment numbers – around 0.8% yearly over the last five years – and a decrease of the unemployment rate from 8.3% in crisis-year 2009 to 6.0% more recently. Since 2014, yearly wage gains range from 2.5 to 2.8% (on a hourly basis). There is no wage-price spiral in sight, and hence no action required by the ECB, given also the weaker inflationary pressures due to lower economic growth in the rest of the eurozone. But the train seems to have started moving.

Tom Yates adds his thoughts on the political economy of pre and post inflation rates in the euro area. Before the financial crisis, a standard assumption was that the southern peripheral countries were on a path to converge their income per capita to northern levels, and as such, through Balassa-Samuelson effects (describing how increase in traded-goods-sector productivity in the South bids up the price of non-traded goods there, relative to abroad), experiencing faster inflation. The ‘below, but close to’ 2% target of the ECB was fine for the conservative north, since it meant that hitting 2% inflation in the Eurozone as a whole would actually imply <2 per cent for them.

However, after the crisis, the southern story looks rather different. It turns out that the price of non-traded goods was being pushed up not by durable increases in productivity, but by excessive domestic demand, fuelled by borrowing against future income that was not going to arrive, and facilitated by spreads that were too low. The south has now been embarking on a protracted and painful internal devaluation. The political economy of the aggregate 2% target is now not so favourable to the north, since it means northern inflation will have to average >2% to hit the target while this devaluation is underway in the south.

On a global level, Gavyn Davies argues that in mid-2016, the global economy embarked on a regime of reflation that has been dominating market behaviour ever since then. One of the most important questions for 2017 is whether this bout of reflation will continue. His answer is that it will continue, at least compared to the sluggish rates of increase in nominal GDP since the Great Financial Crash. Headline inflation rates might keep rising if commodity prices respond further to the strength of global aggregate demand. However, he argues that one of the most important lessons from the recent past is that core inflation is extremely stable at a low level in the face of commodity price shocks in both directions. This limits the probability of a major inflation scare in the advanced economies.

On a similar topic, Carmen Reinhart asks herself if the deflation cycle is really over (see figure below). Since the global crisis that erupted in 2008, private deleveraging became a steady headwind against central bank efforts to reflate. In 2009, about one-third of advanced economies recorded a decline in prices – a post-war high. In the years that followed, the incidence of deflation remained high by post-war standards, and most central banks persistently undershot their modest inflation objectives (around 2%). Also, she argues that because US President Donald Trump’s stimulus plans are procyclical – they are likely to gain traction when the US economy is at or near full-employment – they have reawakened expectations that the US inflation rate is headed higher. Indeed, inflation is widely expected to surpass the Federal Reserve’s 2% objective. 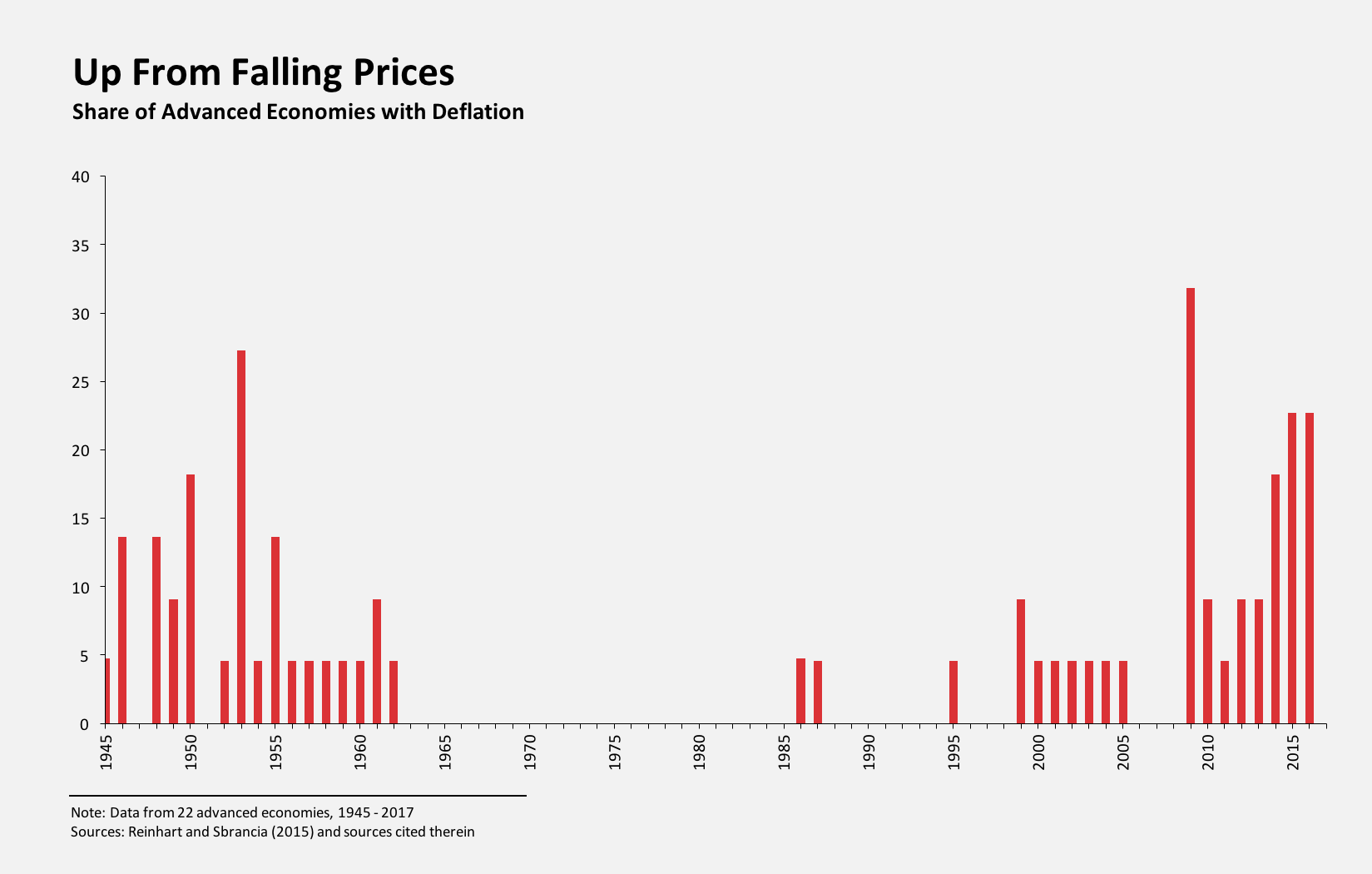 Paul Krugman also has some thoughts about the shock of the normal, and shows it with an updated version of IS-LM (investment-savings/liquidity preference-money supply). Suppose you’re considering the effects of policies that will, other things equal, raise or lower aggregate demand — that is, shift the IS curve. In normal circumstances, where the IS curve intersects an upward-sloping LM, such shifts have limited effects on output and employment, because they’re offset by changes in interest rates: fiscal expansion leads to crowding out, austerity to crowding in, and multipliers are low.

In the aftermath of the financial crisis, however, we spent an extended period at the ZLB (zero lower bound), as shown by the “2010” IS curve. In those conditions, shifts in the IS curve don’t move interest rates, there is no crowding out (actually crowding in because increased sales lead to higher investment), and multipliers are large. Wages are finally rising, quit rates are back to pre-crisis levels, so we seem to be fairly close to full employment, and the Fed is raising rates. So it now looks like the “2017” IS curve in the figure. 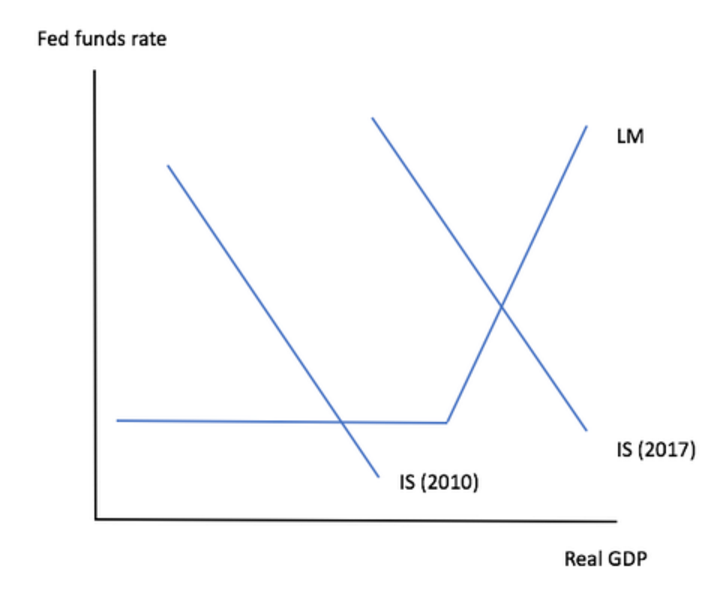 Paul Krugman adds that the US seems just barely over the border into normality, which is why he thinks the Fed should hold and the US could still use some fiscal stimulus for insurance, and very low rates still make the case for lots of infrastructure spending. But the situation is not the same as it was.

Following Gavin Davis, inflation expectations will continue to rise markedly in the advanced economies only if the credibility of central banks’ inflation targets is called into question. For him, this seems unlikely in the Eurozone and Japan, but it is more conceivable in the US and the UK, where labour markets are very close to full employment. In both of these countries, there are questions about the tolerance of the central banks to “temporarily” higher inflation under the new political regimes that have emerged.

The President of the Federal Reserve Bank of Chicago Charles Evans put forward his thoughts on the topic in a speech back in June 2016. For Simon Wren-Lewis this essentially means that the Fed should depart from the usual policy approach of targeting expected inflation, and wait for inflation to actually rise above target before it raises rates. This would mean that it should ignore any fiscal stimulus (whether it be tax cuts or additional public investment), and focus simply on the actual inflation rate. He states that “if we are in fact below full employment, or if demand creates its own supply, fiscal expansion would raise output and welfare”.

Simon Wren-Lewis adds an important point: you do not need to believe with certainty that an economy is below full employment or that demand will create its own supply. All you have to do is give it some significant probability of being true. You then look at the costs and benefits of pursuing an Evans-type monetary policy weighted by this probability. A key point here is that the costs of a short term overshoot of the 2% target are likely to be a lot smaller than the cost of missing out on a percent or two of national output for potentially some time.

Pia Hüttl is an Affiliate Fellow at Bruegel. Prior to this, Pia worked as a Trainee in the Monetary Policy Stance Division of the European Central Bank, and as a Blue Book Stagiaire at the Monetary policy, Exchange rate policy of the euro area, ERM II and Euro adoption Unit of DG ECFIN. She holds a Bachelor’s degree in European Economics and a Master’s degree in International Economics from the University of Rome Tor Vergata. She also obtained a Master’s degree in European Political Economy from the London School of Economics, with a thesis on Current Account imbalances in the Euro area and the role of financial integration. Her research interests include Macroeconomics, International Economics and European political economy. She is fluent in German, Italian and English, and has good notions of French. 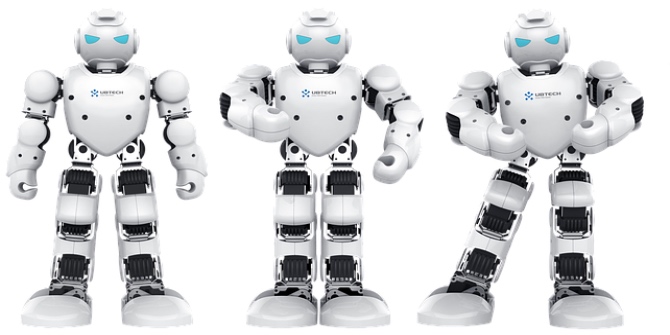 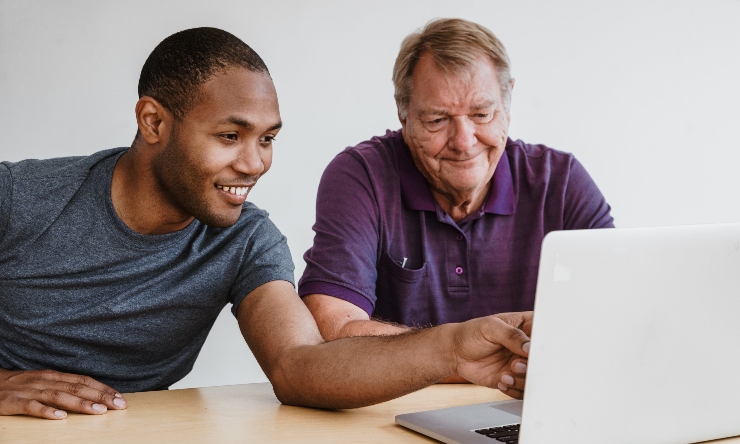 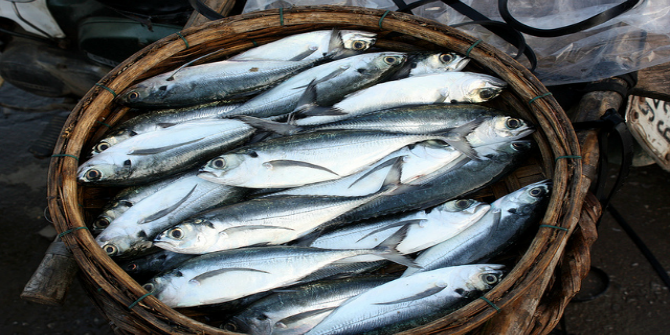