We tend to change our tech norms and behaviour in the presence of bystanders, a rarely studied phenomenon so far, write Anastasia Sergeeva, Marleen Huysman, Maura Soekijad and Bart van den Hooff 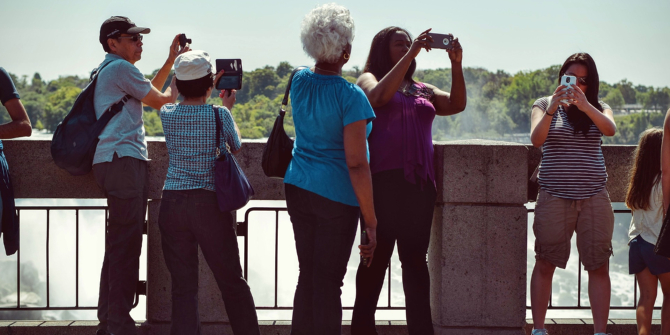 The use of mobile devices has permeated our daily lives and has in various ways influenced the way we interact with each other. For instance, even during an animated conversation with a loved one we allow ourselves to be disturbed by intruding push messages on our phone. In work meetings we often switch between screens on our laptop to check emails or multitask. And although we know we need an eye on safety in traffic we regularly prioritize texting while crossing the streets. How did we get this ‘addicted’ to our mobile devices? Why do we seem to have developed norms that allow ourselves to be so distracted by technology?

Most explanations of such phenomena refer to technological devices as being designed to create distraction. Others explain such behaviours by users’ weaknesses: it is the individual personalities that make them victims of disturbing devices. Our study, however, revealed a hidden factor to explain how technology is used, beyond the user or the technology. We found that bystanders who do not use a technology themselves affect the way that technology is used. We call this ‘the onlooker effect’.

The onlooker effect causes users and non-users together to develop and change social norms around the use of technology. Think of what happens to people who talk too loudly on their mobile phone while entering a silent area in the train. Or why we sometimes hide our texting behaviour during dinner or meetings. We tend to change our behaviour in the presence of bystanders. Scholars, however, thus far have neglected this hidden role of the onlooker.

We discovered the important role of the onlooker during our two-year ethnographic study in a hospital setting, where we analysed nurses at work, using observations of 57 surgeries and 64 interviews. There, we saw that it was possible for nurses in an operating room (OR) to use their mobile devices during an operation. Nurses received the devices to improve their access to medically relevant information required during surgeries. As we over time followed nurses’ behaviours with technology, however, we saw that they started to get very absorbed by their devices, specifically in their use for non-work related activities, even during an operation.

Of the nurses we studied, 72 per cent admitted to be using their devices for email, social media and games, while in the OR. Although this caused a lot of annoyance among co-workers (83 per cent of nurses mentioned this), this behaviour was condoned nonetheless. People said that although inappropriate, they were willing to tolerate it ‘because everybody does it’. At the end of a second year of our study, this use of mobile devices was informally accepted; it persisted and became habitual: all of our interviewees in that phase stated that it was “normal” and “happening all the time”. Somehow it seemed that social norms had changed over time: we ultimately saw a new norm emerge that legitimised this use of mobile devices. We could not fully explain this finding without taking into account the onlooker effect.

The initial explanation came from the division of labour in the OR, where the nurses are divided into scrub and non-sterile ones. A scrub nurse would be required to directly assist the surgeon, while the non-sterile nurse was required to support the other by handing over materials, but in practice was “on stand-by” and had lots of idle time. The mobile device offered a solution to boredom during lengthy operations for the non-sterile nurses. Being scrubbed and unable to use the technology themselves, sterile nurses are onlookers to those who use the devices. As onlookers, those scrub nurses were able to exert influence on how the other nurses used their mobile technology. The users were very much aware of the “onlookers” being unhappy about them being distracted, and subsequently adapted their use to this. On the one hand, they started using their devices in a more “hidden” way (e.g., keeping them under the table), while on the other hand, they more actively signaled that they were paying attention to the surgery.

One important reason for this influence of onlookers is the fact that each nurse sometimes acts as a scrub nurse, and sometimes as a stand-by nurse. In other words, they know from experience what a stand-by nurse would typically use the mobile device for. It was thus partly in their own interest to somehow make this use of the mobile device acceptable. Also, it was difficult for the onlookers to see exactly what the stand-by nurse was doing on the device at a certain moment – they might be using it for checking information relevant to the surgery. Consequently, they could not easily reprimand the users in a very explicit way.

For example, during the 57 surgeries we observed, all of the “stand-by” nurses were absorbed in their devices, but only in three cases were they directly reprimanded by the scrub nurse. Thus, a pattern of use emerged that we label “legitimised hypocrisy”: in spite of the official norm, using the mobile device was seen as acceptable as long as it was hidden from others and caused only minimal disturbance to the surgical procedure.

In our study, the role of “others” was the missing link to explain why the non-work related use of mobile devices could persist in the OR. So far, literature had emphasised the users of technology. For example, studies focus on how the use of these devices can for instance lead to problems in work-life boundaries, or create smartphone addiction. There is only very limited attention in previous research for how “others” – i.e., those in close proximity to a user, who are not using that technology themselves – influence our use of technology. We could build on insights from Leonardi et al. (2010) for example, who showed that employees who are allowed to work from home took imagined perceptions of ‘others’ into account in deciding how to use technology, for instance by pretending to appear busy with work while in fact doing laundry or playing with kids.

So what can we learn from this study for understanding technology use in society? The hospital setting allows us to see distraction by technology in an extreme form: nurses cannot be distracted during their work in an operating room as they need to help doctors save lives. Still, it occurred and this was greatly because of the influence of onlookers. In contrast to common technologically deterministic explanations, our study showed that even the strongest social norms can be adapted to accommodate technology – not only through users’ own behaviours, but with considerable participation of those in close proximity to them: the onlookers. In the age of lively debates about how technology impacts society, work and life, we show that to understand its impact we need to study the micro-context of interaction between users, technology and third actors. Only this will allow us to better understand how technology impacts social norms and ultimately design better technologies.

Anastasia Sergeeva is assistant professor at the KIN Center for Digital Innovation in the School of Business and Economics at Vrije Universiteit Amsterdam. Her research interests include technology-mediated organisational change, transformation of professional work and emergence of new forms of organising due to digital technologies. Dr. Sergeeva’s research has been published in leading academic journals. Being inspired by her professional background in healthcare management, Dr. Sergeeva has a specific interest in the impact of technology on work in healthcare settings.

Marleen Huysman heads the KIN Center for Digital Innovation, and is head of the department of Information systems, Logistics and Innovation (ILI) at the Vrije Universiteit Amsterdam. She studied Sociology at Erasmus University Rotterdam and has a PhD in business economics on the topic of organisational learning and IT at VU University. Since 2006 Marleen holds a chair in knowledge and organisation at the faculty of economics and business administration at VU University. During her PhD, she was a visiting scholar at Stanford and in 2000-2001 at the Technology and Innovation Management (TIM) group at Harvard Business School. She conducts research in the following overlapping fields of research, all related to the development and use of digital innovation: new ways of working; technology in practice; and knowledge sharing, coordination, development and integration.

Maura Soekijad is an associate professor at the KIN Center for Digital Innovation in the School of Business and Economics at Vrije Universiteit Amsterdam. She is trained as an ethnographer, and her research interests span identity work, knowledge and professions, online communities, and collaborative (digital) innovation, all studied from a micro perspective, mostly based on qualitative data. She has published in a broad range of academic journals.

Bart van den Hooff is professor of organisational communication and information systems at the KIN Center for Digital Innovation, Vrije Universiteit Amsterdam. He has a PhD in communication from the University of Amsterdam. Before coming to VU University, he worked in consultancy (M&I/Partners), at Delft University of Technology and the University of Amsterdam. His research interests include complexity in information systems, business-IT alignment at different levels, online interaction and the use of mobile devices. His work has been presented at international conferences and published in leading academic journals.