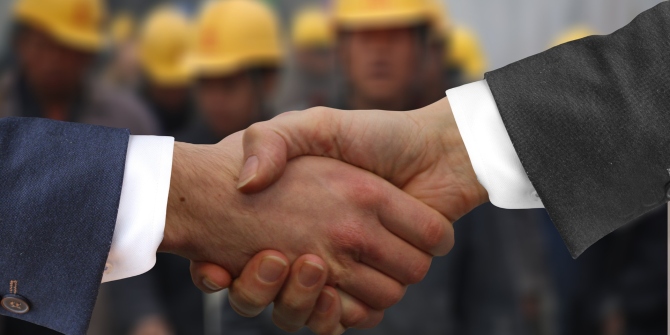 Stagnating real wages and falling labour shares across developed economies have stimulated a renewed interest in the question of how, and to what extent, rents are shared with labour. Nicholas Kaldor’s (1957) long-held stylised fact that the fraction of national income going to labour is fixed has been questioned, for instance, by Karabarbounis and Neiman (2014), who show that the global labour share has dropped from 65 per cent in 1980 to 59 per cent today. Over the same period US labour productivity has grown by 90 per cent but the median real wage only by a paltry 10 per cent, rekindling debates about whether growth benefits workers dating from as far back as Ricardo to the highly influential contemporary work of Thomas Piketty.

In response to these developments, scholars have again turned their attention to firms and their wage-setting process. David Autor, John Van Reenen and co-authors (2017), building on the seminal works of Michał Kalecki (1938), have recently reconnected the distribution of income with the behaviour of firms and their market power. The question is how the power structure in product and labour markets translates into wage stagnation and a lower labour share? A classic account is that workers lose bargaining power, and therefore they are less able to claim a portion of a firm’s rents — a phenomenon known as rent sharing. Knowing how rent sharing has evolved over time can therefore help understand changes in the position of workers within companies and shed light on the mechanisms behind the fall in the labour share. However, and at least in part owing to a lack of data, the reality is that little is known about long-run changes in rent sharing.

Our recent paper (Bell et al. 2018) aims to redress this by looking at the long-run evolution of rent sharing among UK-domiciled companies. It features the compilation of a comprehensive and consistent panel of the top 300 companies by market capitalisation listed on the London Stock Exchange from 1983 until 2016. The sample includes well-known British companies, such as BP, British American Tobacco, Tesco and G4S, which have played an important role in the British economy throughout the last few decades. It also covers all sectors of the economy, which is crucial given the dramatic shift from manufacturing to services occurring in the UK since the 1980s.

The prime empirical focus of the paper is to examine rent sharing, and its temporal variation, by estimating the elasticity of firm-level average wages with respect to firm’s profits per employee, after accounting for all time-invariant firm characteristics and outside-firm forces shaping wages (e.g. the unemployment rate, industry-level wages, and other common effects over time). We deal with potential endogeneity — that the profit-pay link may work in both directions — by instrumenting firm-level profits with their lags or industry-average profits.

The first result to emerge is of a positive and statistically significant rent-sharing parameter. Estimating over the whole sample this rent sharing elasticity is fairly modest in magnitude. A one per cent increase in profits implies around 0.01 per cent increase in wages. The second, more novel result concerns the time series evolution of rent sharing. There is a substantial fall in the long-run elasticity from 0.043 in the period 1983-2000 to 0.012 in the period 2001-2016. The finding of a significantly reduced rent sharing parameter proves robust to various specification checks and alternative definitions of the sample. Moreover, the same result emerges for a panel of UK manufacturing companies, which provides data on domestic operations only. In addition, industry-level data for the US and for nine EU countries again show the same pattern. Consistent with the firm analysis, there is a strongly falling rent sharing for almost all countries since the early 2000s (EU) and the 1970-80s (US).

The elasticities might appear small, but one should keep in mind that profits can be extremely volatile, so even a small elasticity might have significant implication for wages. To illustrate this, Figure 1 shows the so-called Lester range, which is a rent sharing-induced wage gap between firms from the bottom and the top of the distribution of profits per employee (distance of four standard deviations). For instance, in our main sample (Top 300, black solid line), between 1983-1991 very profitable companies paid on average 50 per cent higher wages only because of rent sharing, compared to non-profitable companies. After 2009, the gap has narrowed to merely 10 per cent, implying that companies shared profits with workers to a much lesser extent.

Figure 1. The rent-sharing-induced wage gap between firms from the bottom and the top of the distribution of profits per employee (distance of four standard deviations) 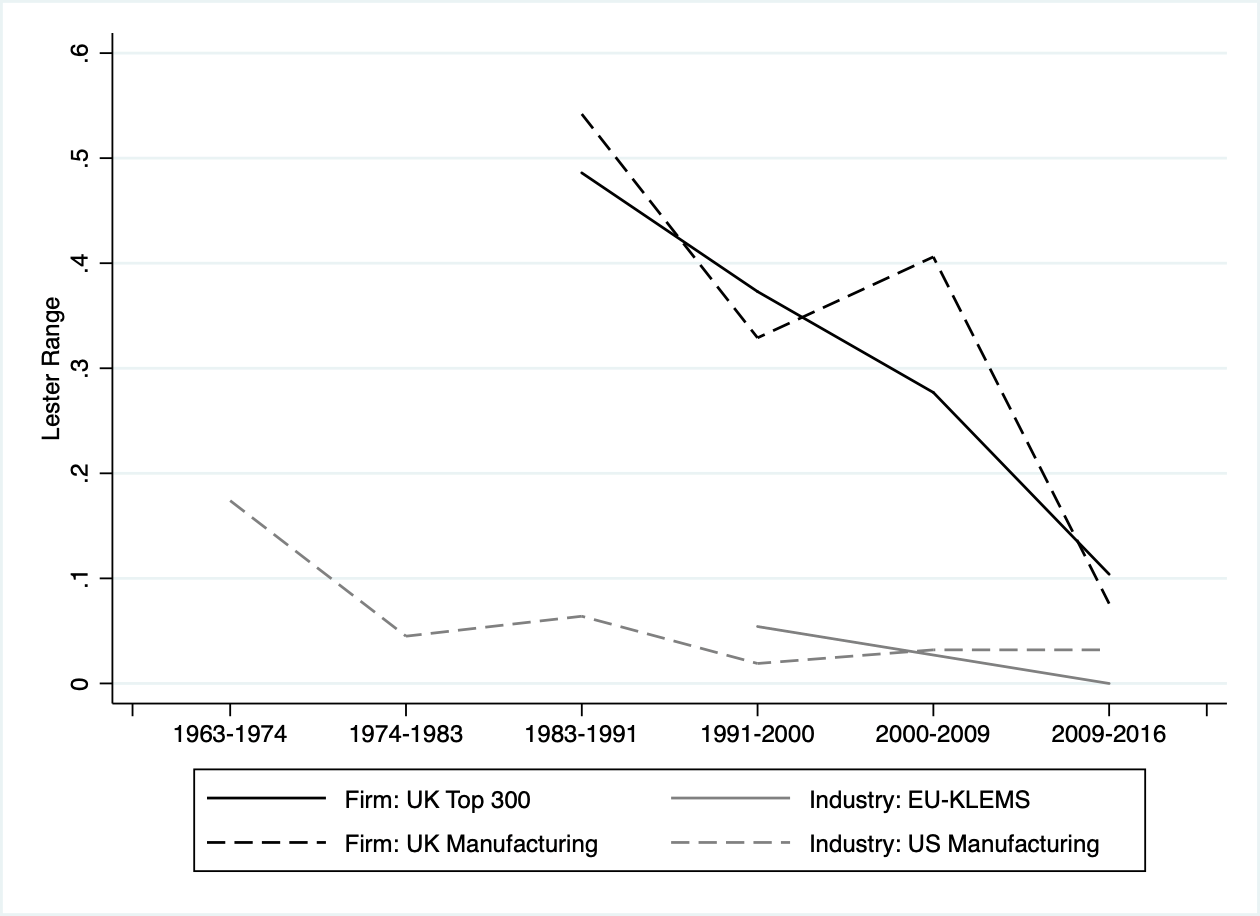 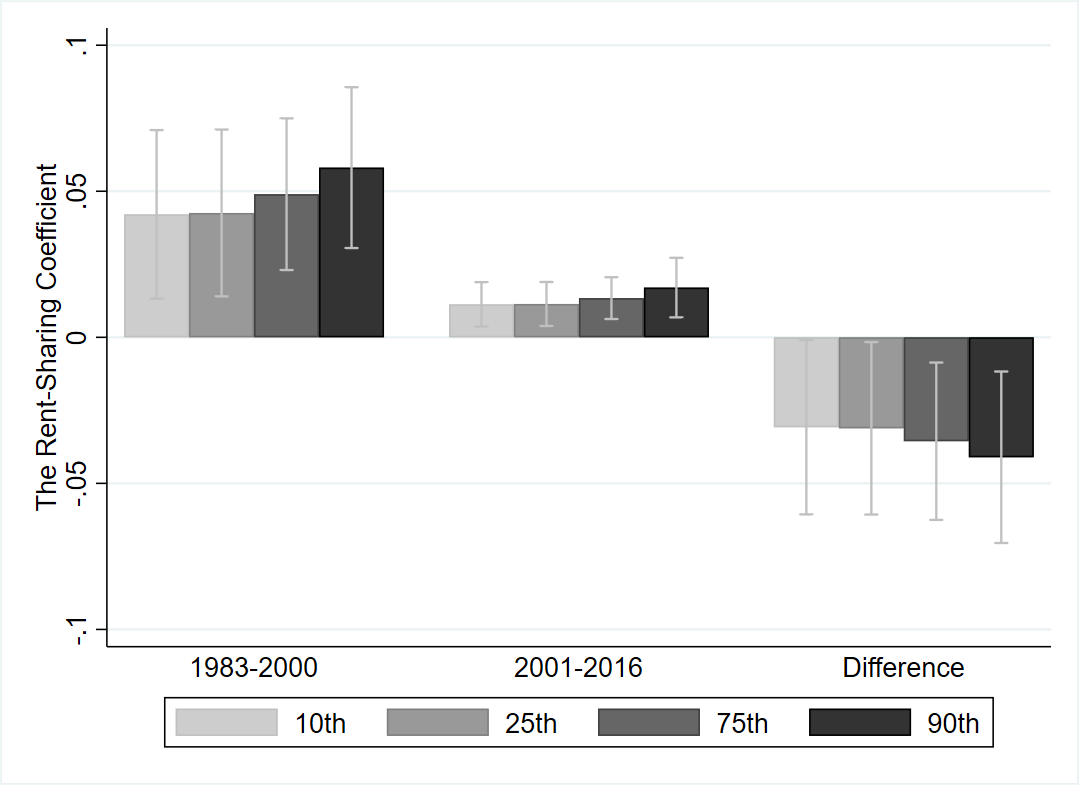 These findings have implications for debates on the future of work. A decline in rent sharing implies growing income inequalities (especially between labour and capital) and may encourage calls for a bigger role for redistributive policies. It also suggests a fundamental change in the competitiveness of the labour market. A weaker bargaining position of workers might be a result of technological change (‘robocalypse’), higher labour mobility and institutional change (e.g. decline in unions). Finally, companies with higher market power experience relatively larger falls in rent sharing, suggesting that competition policies should also be analysed from the labour market perspective. As these companies are increasingly global, with many have value chains connected across countries, one might expect these trends to become world-wide phenomena.

Brian Bell is a senior lecturer in economics at King’s College London. He was associate professor in economics at the University of Oxford (2012-2016) and research fellow at LSE’s Centre for Economic Performance (2009-2012) — where he remains a research associate. He has spent much of his career outside of academia. He worked as an economist and proprietary trader for a number of hedge funds and investment banks in London and also spent time at the International Monetary Fund and the Bank

Pawel Bukowski is a research economist at LSE’s Centre for Economic Performance and guest teacher at the department of economics, LSE. He holds a PhD in economics from Central European