The cost of discrimination against senior Jewish managers in Nazi Germany

Less efficiency and lower profitability for firms carry lessons for Britain and the US, write Kilian Huber, Volker Lindenthal and Fabian Waldinger

The cost of discrimination against senior Jewish managers in Nazi Germany 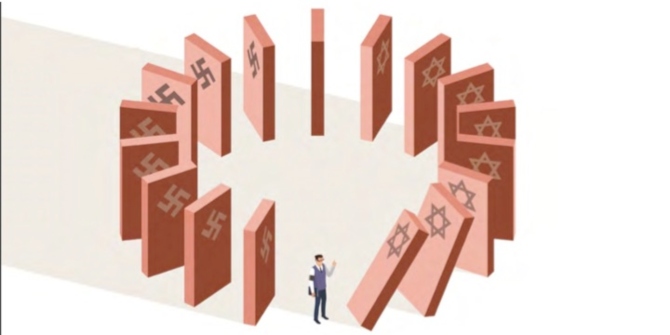 Talented individuals are often excluded from leadership positions if they belong to a group that faces discrimination. Such discrimination is, of course, extremely hurtful and unfair to the individuals. But is it also costly in a more general sense?

In particular, do corporations  become less profitable when they adopt discriminatory attitudes and exclude highly qualified individuals from leadership roles? How much do entire economies suffer when governments enact discriminatory policies against certain groups?

Recent political events have underscored the importance of these questions. For example, the American travel ban on citizens of several Muslim-majority countries raised fears among US corporations (including Amazon, Nike and MasterCard) that increasing discrimination will leave them unable to recruit and retain talent. In Turkey, several thousand executives who follow the cleric Fethullah Gülen have been arrested or have fled overseas since 2016, fuelling concerns of an economic collapse.

History is rich with examples of such discrimination. For example, the US government gave in to ‘race prejudice’ and forcibly interned Japanese-Americans during the Second World War. The entrepreneurial Huguenots had to flee seventeenth century France due to religious persecution. The economic costs of discrimination are also important if we want to assess the benefits of government policies that help discriminated groups to break the ‘glass ceiling’ to reach leadership positions.

Despite the importance of the issue,  we currently have little evidence on how costly discrimination against highly qualified individuals in leading positions can be. Our research breaks new ground by measuring the economic losses caused by such discrimination.

Specifically, we analyse discrimination against senior managers with Jewish origins in Nazi Germany. Using this unique setting and new data on individual managers and corporations, we study how the share prices and profitability of firms evolved when the Jewish managers were removed from the German economy due to rising anti-Semitism.

The exclusion of Jewish managers from firms  in Nazi Germany

We collect new data on almost 30,000 managerial positions in German firms listed on the Berlin Stock Exchange. Managers of Jewish origin (either practicing Jews or Christians with a Jewish ancestor) held around 15 per cent of senior management positions in 1928 and 1932 (see Figure 1).

After the Nazis gained power on 30 January 1933, discrimination against Jews became commonplace in Germany. Many firms voluntarily dismissed managers of Jewish origin or were coerced into removing them by Nazi officials. Deutsche Bank, for example, forced chief executive Oscar Wassermann and executive board member Theodor Frank to resign their positions by 1 June 1933. By 1938, virtually no Jewish managers remained in firms listed in Berlin. 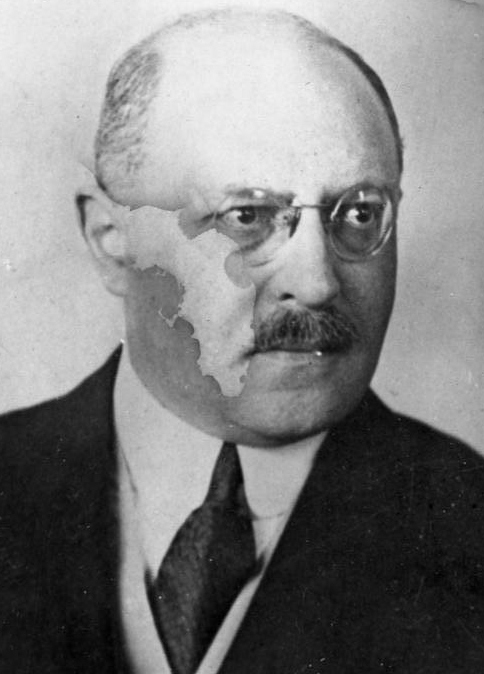 The effects on the characteristics of firms’ senior management

In our first set of results, we show that losing the Jewish managers changed the observable characteristics of senior managers at firms that had employed Jewish managers in 1932. The number of managers with managerial experience and university degrees, and the total number of connections to other firms (measured by seats on other supervisory boards) fell significantly.

The effects on all management characteristics persisted at least until the end of our sample period in 1938. 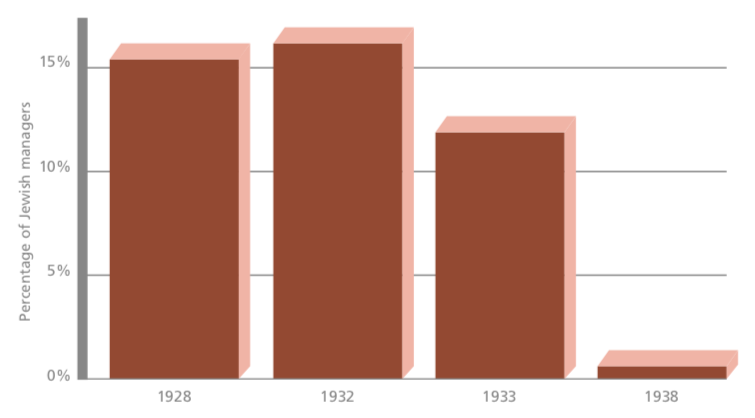 Notes: The figure reports the percentage of senior management positions that were held by Jewish managers in firms listed on the Berlin Stock Exchange.

It is striking that our estimated short- run effect of losing Jewish managers is close to the initial share price responses to the exits of prominent managers in recent times. For example, after Apple chief executive Steve Jobs took permanent medical leave in 2011, his company’s shares fell by 6 per cent. When Fiat Chrysler chief executive Sergio Marchionne stepped down due to surgery in 2018, the company’s shares lost 5 per cent.

The effect on dividends and returns on assets

Our findings inform our understanding of how the rise of a discriminatory ideology can cause real economic harm. A back- of-the-envelope calculation suggests that excluding the Jewish managers reduced the aggregate market valuation of firms listed in Berlin by 1.8 per cent of German gross national product, a first-order economic loss.

Arguably, our study focuses on the most severe form of discrimination against a particular group of individuals, but even less severe forms of discrimination can lead to a loss of talent. As highlighted above, the US travel ban and the persecution  of Turkish executives are current examples of rising discrimination that are likely to affect firms.

Even the perception of not being welcome in a country may lead to the outflow of high-skilled individuals. For example, there are many reports of highly paid continental Europeans planning to leave the UK in the coming years as a consequence of Brexit. The results in our study indicate that such an exodus could significantly hurt firms and the economy. 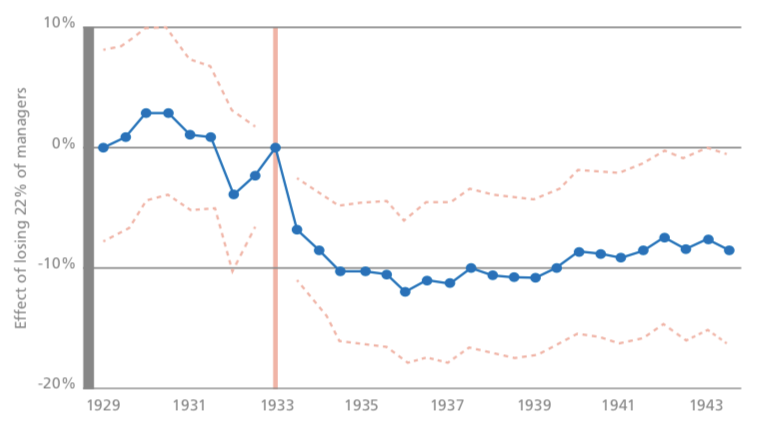 Fabian Waldinger teaches economics at the University of Munich. He was previously associate professor of management at LSE.  His research interests are the economics of innovation, economic history, and labour economics.