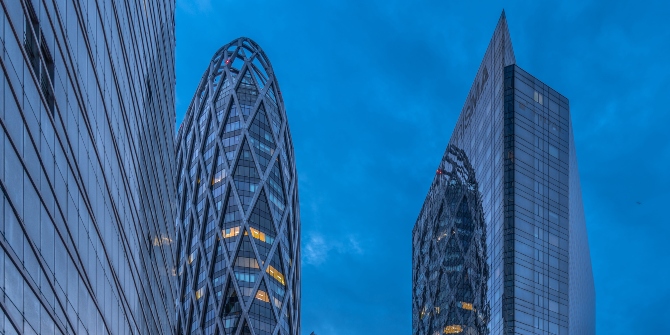 Is it possible to attribute the banks’ home bias in sovereign exposure to something beyond their externally-imposed (such as moral suasion) or internally-distorted (such as risk-shifting) incentives? Despite the so-called doom loop between the two, could the relationship of banks with their domestic governments have an underexplored silver lining?

These are the questions I pursue in a recent paper. By using a novel bank-level dataset compiled from various stress tests, transparency and capital exercises of the European Banking Authority (EBA), I first confirm the previous literature by illustrating that the European banks’ home bias in sovereign bonds almost doubled in response to the Eurozone crisis. Figure 1, constructed with a separate country-level dataset, visually complements this finding and additionally shows that this phenomenon was unique to financial intermediaries compared with other types of creditors situated in the same set of countries; a clear indication of commercial banks falling in love with the sovereign debt of their own countries.

Figure 1. The rise and fall of the Eurozone banks’ home bias in government bonds 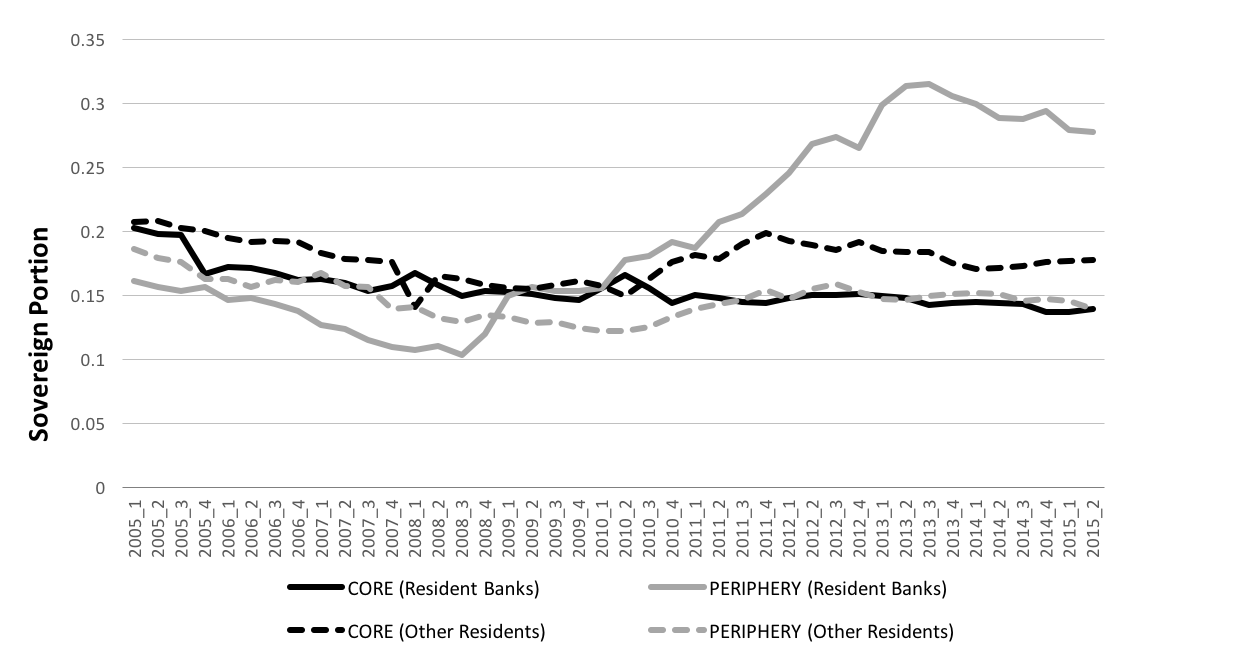 Bad reasons to fall in love

So far, the literature has mainly attributed the increase in sovereign home bias to the “moral suasion” hypothesis, namely the possibility that governments may implicitly force their domestic banks to hold a larger chunk of government bonds when they experience stress (Ongena, Popov & Van Horen, 2019). Another often-cited hypothesis has been the case of “risk-shifting”, where weakly-capitalised banks could voluntarily bet on risky government securities in order to shift the risk from shareholders to creditors (Horvath, Huizinga & Ioannidou, 2015). A more elusive, but not less important, channel has been pinpointed by Broner, Martin and Ventura (2010) where well-functioning secondary markets may pave the way for the sovereign debt to flow back to the issuing country in times of high stress since such reallocation would endogenously prevent the sovereign from defaulting on its promises. Finally, carry-trade incentives of the domestic banks might be blamed for the excessive exposure to high-yielding risky sovereigns (Acharya & Steffen, 2015).

With the dismal interaction between sovereign and banking crisis in the background, most of this literature has focused on listing the “bad” reasons for the increasing home bias that could amplify the negative loop between banks and governments, and thus endanger the financial stability. In Saka (2019) I provide further evidence that this jump in home bias during the Eurozone crisis was not unique to the sovereign debt category but could be equally (if not more intensely) observed in retail or corporate types of debt in the very same bank balance sheets. This finding is unlikely to be explained by the previous studies that treat sovereign debt as a special category; and therefore ignore the possibility that the home bias could partly be driven by a more general phenomenon that could simultaneously influence multiple asset types during financial downturns.

A good reason to fall in love: information

In a slightly different context, the literature has already shown that local banks stand at a favourable position to have access to soft information regarding their sovereign clients thanks to their “daily exposure to local news stories, first-hand knowledge of the local economy, and personal relationships with key people at the issuing body” (Butler, 2008). This effect is found to be strong especially when the issuing government is riskier. Consequently, during market downturns, when sovereign risk rises, such informational advantage might lead domestic banks to act as buyers of last resort, absorbing local assets while (potentially uninformed) foreign banks may shed their exposure in panic. Indeed a theoretical role for the lack of soft information and the resulting panic by less informed foreign banks are consistent with the evidence that government bond spreads moved in a self-fulfilling pessimistic way during the Eurozone crisis and fell out of touch with the publicly observable hard information regarding the solvency of individual countries (De Grauwe & Ji, 2013; Saka et al., 2015).

In order to identify the effect of information on government bond holdings of the banks in my sample, I first gather various cross-country informational distance measures commonly used in the international finance/trade literature. These range from financial information proxies that track the bank branch linkages (or historical merger activity) across countries to variables that capture the common linguistic and media trends. However, directly checking the effects of these proxies on banks’ government bond holdings may not be suitable as there exists the risk of picking up unobserved country/bank specific characteristics or, more importantly, other types of bilateral cross-country linkages that may not have anything to do with information. This weakness calls for the second layer of my identification strategy where I benefit from the theoretical prediction that the information channel should be stronger for riskier assets (Portes et al., 2001; Butler, 2008).

Thanks to these two layers, I can employ a difference-in-differences model in which I estimate the interaction of information proxies with a measure of sovereign risk while saturating the model with a full set of fixed-effects, especially including dummies at the level of interaction between home country and exposure country so that all time-invariant bilateral cross-country linkages could be directly controlled. This aspect is crucial for my identification strategy and restricts the model to only use the time variation available in sovereign risk to be able to identify the information channel. For example, if British banks typically hold high levels of Cypriot government debt due to their informational advantage in Cyprus, I can capture this only if there is enough variation over time in the Cypriot government bond spreads; otherwise such pair-specific relationships will all be subsumed by time-invariant cross-country fixed-effects.

As a result, I find strong evidence for the argument that the banks headquartered in informationally closer territories increase their relative exposure as the sovereign risk rises. This effect is robust to controlling for alternative mechanisms such as the banks’ risk-shifting tendency, the political strength of their home countries or the exchange rate/redenomination risk. Interestingly, information seems to matter both in the forms of financial (i.e., bank branch linkages) and general (i.e., common language) knowledge regarding the country of exposure. What is even more interesting is that the effects are statistically and economically meaningful even after the end of the Eurozone crisis (mid-2012). For instance, for the country with median sovereign bond spreads in my sample (144bps), a change in branches from 0 to 220 (mean level) corresponds to additional sovereign bond holdings of around 5% at the individual bank level. This effect is more than four times larger than the average holding in my sample (1.2%). In comparison, the size of that effect is close to 50% of the additional contribution of the crisis to average home bias that was documented previously.

As mentioned above, the recent literature has so far emphasised the “bad” ways of sovereign debt reallocation specifically in the context of sovereign debt home bias. In order to avoid the potential omitted variable problem that may be caused by this home bias phenomenon and its unobserved channels (such as moral suasion or secondary markets), I take a rather extreme approach and drop all the domestic observations from the full sample and report a second set of results only with the banks’ remaining exposure to foreign countries. Notice that this is a conservative way of identifying the role of information on banks’ government bond holdings since such a channel, if it exists, would probably be strongest between governments and domestic banks.[1] By dropping these domestic observations and comparing the informational closeness only across foreign banks, I would potentially be underestimating the true magnitude of the information channel in exchange for providing a cleaner identification.

In the end, I confirm that my results hold (even more strongly with some proxies such as historical merger activity) when I concentrate only on the banks’ foreign exposure. That is, ceteris paribus, when foreign banks retreated from the sovereign debt markets of the crisis countries in the Eurozone, they did less so for the countries to which they were informationally closer.

Nevertheless, policy discussions have so far emphasised shifting the regulatory power from national to supranational institutions to avoid moral suasion or coming up with various innovations of debt issuance in order to cut off the link between sovereigns and their banks (see Brunnermeier et al., 2016). Taken at face value, my results imply that these precautions would not be sufficient to prevent the rising home bias problem (to the extent that it constitutes a problem) during crises. Instead, further policy discussions may also focus on increasing transparency in the sovereign debt markets especially in times of crisis or encouraging more cross-border banking activities to improve the informational ties across countries.

An empirical implication of my results is the possibility that the previous literature on the rising sovereign debt home bias in the Eurozone may have been overestimating the role of alternative channels by simply comparing domestic bank exposure to foreign ones in the absence of explicit controls for informational heterogeneity across banks. More research is particularly needed in order to understand the delicate nuance between information and moral suasion when banks and governments are closely linked to each other.

[1] “The same personal and professional ties that may allow sovereigns to apply moral suasion on domestic banks might also give domestic bankers better information about the likelihood of sovereign default or repayment.” (Ethan Ilzetzki’s discussion in Battistini et al., 2014)

Orkun Saka is an assistant professor of finance at the University of Sussex, a visiting fellow at LSE and a research associate at LSE’s Systemic Risk Centre. His main research interests are in financial intermediation, international finance and political economy. He tweets @_OrkunSaka 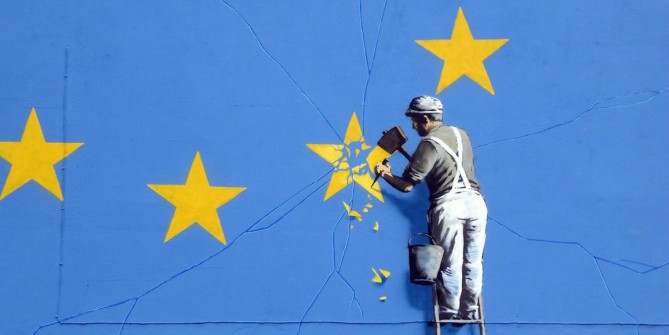