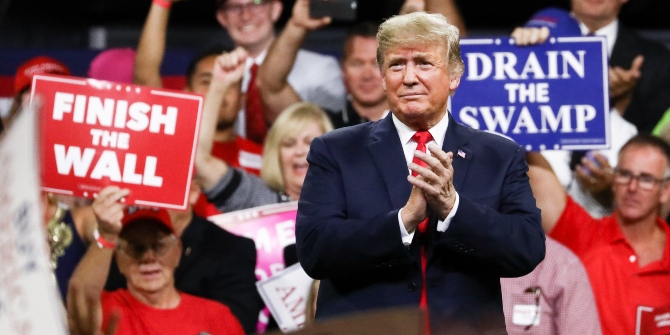 The current health crisis, with its long-term repercussions on the political structure of countries, offers new avenues for researchers to understand how political systems interact with financial actors. The topic was recently discussed in the first London Political Finance (POLFIN) workshop, which reached an international audience of more than 200 scholars interested in the topics at the intersection of politics and finance. Here we lay out some of the important takeaways from our discussions and suggest directions for further research that can shed light on the remaining issues.

The rise of right-wing populist parties in the wake of bank failures. First, Hans Joachim Voth and co-authors (2020) use micro-level data to relate a banking crisis in 1931 to the electoral rise of the Nazi Party in Germany. Two large banks were at the core of the crisis, Danatbank and Dresdner Bank. Cities with a higher share of firms connected to either bank saw larger income declines, and unemployment rose more. However, only towns and cities affected by the failure of Danatbank (which had a Jewish CEO) show evidence of voting for the Nazis above and beyond economic factors. This can be directly linked to Nazi propaganda blaming the economic and financial crisis on the Jewish population.

The second paper in the same session by Emil Verner (and Gyozo Gyöngyösi, 2020) links the post-2008 borrower fragility in Hungary to the rise of the right-wing Jobbik party. Before 2008, a mortgage credit boom in Hungary was driven by Swiss-Franc loans (lower interest rates), with both lenders and borrowers counting on the Hungarian Forint to appreciate vis-à-vis the Swiss Franc over time (in line with the Samuelson-Balassa effect). When in the wake of the Global Financial Crisis the Forint depreciated, Swiss Franc borrowers suffered. Using exogenous variation in the attractiveness of Swiss Franc loans, the authors then show how the post-2008 fragility is correlated with the geographic variation in the rise of the right-wing Jobbik party.

Both studies bring out very important granular evidence on the holy grail of this literature; that is, how populist parties may rise from the ashes of a financial/economic crash. However, as the corresponding discussants (Luigi Zingales and Barry Eichengreen) of these two papers have rightly pointed out, we still do not know why the right-wing populist parties are the ones that disproportionately benefit from crises and there is need for more research to illustrate how the initial conditions (such as ideology and the propaganda style) may contribute to this phenomenon.

How private interests influence financial regulation, potentially distorting efficient policymaking. Adams & Mosk, 2020 focuses on a large manually collected dataset of campaign letters written to the US Congress in order to derive policy positions of the financial industry on 581 specific bills. Tracking the full process from the initial sponsoring to the passage of a bill, authors find strong evidence that campaign contributions increase the likelihood of policymaking that is in favour of the financial industry and against the will of organised consumer groups.

Tenekedjieva, 2020, uses the setting of the US insurance industry and finds that regulators with a post-regulation career in mind may become more lenient towards the firms that they are supposed to regulate. Both projects have direct policy implications in order to minimise the aggregate private distortions to policymaking, and future research can benefit more from concentrating on policy areas, industries and firms with the largest potential of a clash between private and public incentives (“battlefields”) in order to illustrate how large these private distortions may become.

Travers Barclay Child and co-authors (2020) use the surprise of Donald Trump’s election in 2016 to identify the value of sudden connectedness to the US president among S&P 500 ﬁrms with pre-existing ties to the businessman Trump. They show that Trump-connected ﬁrms (though only business- and not socially related) had signiﬁcantly higher abnormal stock returns around the 2016 election than their nonconnected counterparts, which translates to $1.2 and $2.4 billion in wealth creation for shareholders. Since Trump’s inauguration, connected ﬁrms showed better performance, were more likely to receive government procurement contracts, and were less subject to unfavourable regulatory actions. Even though one cannot clearly differentiate whether there was corruption or an information story due to these connections, most anecdotal evidence seems to favour the former.

How partisan and racial divisions may change the behaviour of financial agents and institutions. Margarita Tsoutsoura (with Elisabeth Kempf, 2020) presented evidence that credit rating analysts are more likely to downgrade a firm when their political party affiliation is the opposite of that of the US president. The novel identification strategy comes from the fact that authors can tease out the variation within the same firm and time point. In line with the recent evidence on how political affiliations can bias the perception of objective information (Alesina et al., 2020), this work is invaluable to our understanding of how individual-level politics matters in credit markets. Later, Thomas Krause (2020) showed—via regression discontinuity design—that when local politicians from minority groups win an election, they make better use of the existing regulations to increase the financial inclusion of such groups. A further avenue for this type of research on local politics and finance would be to explore to what extent the real gaps between minority and non-minority groups could be reduced via improved credit access.

The role of the media. April Knill and co-authors (2020) showed that partisanship in television coverage influences corporate decisions. Specifically, authors show that Fox News has a clear bias in favour of Republican presidents. Exploiting the fact that the Fox News channel was not available across all of the US, they find that during George W. Bush’ presidency,  firms led by Republican-leaning managers headquartered in regions into which Fox was introduced shift upward their total investment expenditures, R&D expenditures, and leverage, compared to firms led by Republican-leaning managers headquartered elsewhere.

Ruben Durante and co-authors (2020) consider media capture by banks. Specifically, investigating a sample of top European newspapers and linking them to their creditor banks, the authors show that newspapers’ coverage of their lender bank’s earnings announcements, relative to other banks, are signiﬁcantly more likely in case of proﬁts than in case of losses. This pro-lender bias is stronger for newspapers that are highly leveraged. This bias also carries over to the Eurozone crisis, when newspapers connected to banks more heavily exposed to stressed sovereign bonds are less likely to portrait banks as being responsible for the crisis and to support debt-restructuring measures detrimental to creditors. These two new studies are greatly welcome to the literature as the discipline of finance has been lagging behind (compared to economics literature) in terms of accepting the heterogeneity in media coverage and exploring how such biased (partisan or self-interested) media communication may lead to distortions in financial decision-making. In the age of fake news and news spread incredibly fast through social media, we need more research to understand whether and how these distortions may persist over the long term.

As our keynote speaker, Sir Tim Besley, rightly pointed out, the distribution of government support packages across financial institutions and the tackling of potentially skyrocketing non-performing loans (NPLs) in the immediate aftermath of the Covid-19 shock will be the new fault lines to be closely watched and analysed by researchers with political economy implications in mind. At the same time, the financial sector will not only suffer during this crisis—as many other sectors—but will be critical in the recovery phase. The COVID-19 shock offers a unique opportunity for researchers in the field of politics and finance, but also an important responsibility to inform the current political decision process with experiences from previous crises.

Thorsten Beck is a professor of banking and finance at Cass Business School in London and a research fellow of the Centre for Economic Policy Research (CEPR). He is also (Co)-Editor of the Journal of Banking and Finance. His main research interests are in financial intermediation, inclusion and stability. He tweets @TL_Beck_London.

Orkun Saka is an assistant professor of finance at the University of Sussex, a visiting fellow at the LSE, and a research associate at the Systemic Risk Centre. His main research interests are in financial intermediation, international finance and political economy. He tweets @_orkunsaka.

Paolo Volpin is the interim dean and a professor of finance at Cass Business School in London, a research fellow of the Centre for Economic Policy Research (CEPR) and a research associate of the European Corporate Governance Institute (ECGI). His main research interests are in corporate finance, especially in the field of corporate governance. He tweets @p_volpin.

Thorsten Beck is a professor of banking and finance at Cass Business School in London and a research fellow of the Centre for Economic Policy Research (CEPR). He is also director of the Florence School of Banking and Finance and a chair of financial stability at the European University Institute since September 2021. His main research interests are in financial intermediation, inclusion and stability. He tweets @TL_Beck_London.

Orkun Saka is an assistant professor of finance at the University of Sussex, a visiting fellow at the LSE, a research associate at the Systemic Risk Centre and STICERD, as well as an affiliate at CESifo. His main research interests are in financial intermediation, international finance and political economy. He tweets @_OrkunSaka.

Paolo Volpin is the interim dean and a professor of finance at Cass Business School in London, a research fellow of the Centre for Economic Policy Research (CEPR) and a research associate of the European Corporate Governance Institute (ECGI). His main research interests are in corporate finance, especially in the field of corporate governance. He tweets @p_volpin. 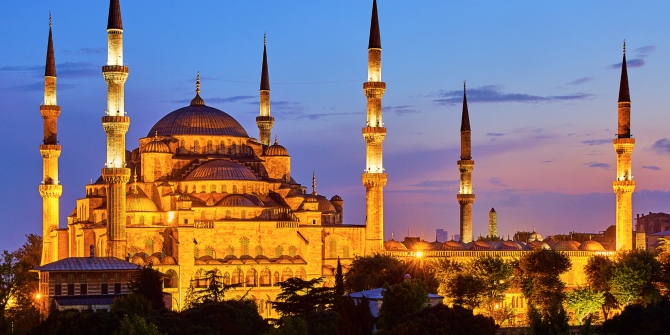 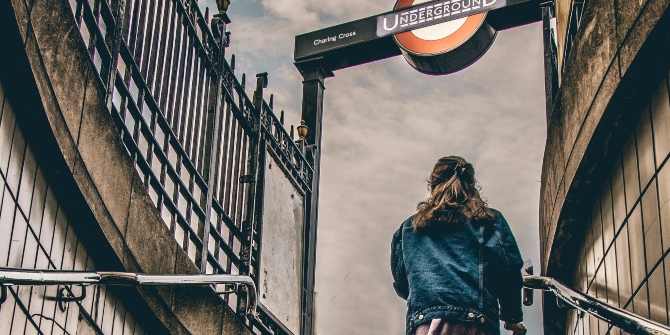