When men and women working long hours is the norm, women’s careers stall

The 24/7 culture pits home against work in the battle over limited hours and creates discontent for women and men alike, write Irene Padavic, Robin J. Ely, and Erin M. Reid

When men and women working long hours is the norm, women’s careers stall 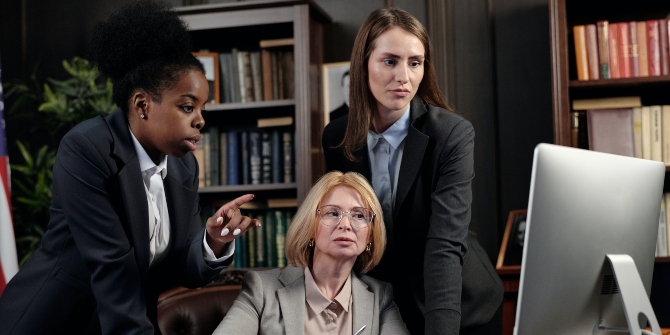 Women remain remarkably underrepresented in the partner ranks in professional service firms—as lawyers, accountants, and consultants—despite having gained parity with men at the associate level long ago.

This stalled advancement is surprising in light of companies’ efforts to improve the situation, often by means of well-intentioned work-life accommodation policies. Time and again, however, researchers document how taking accommodations has the unintended effect of derailing women’s careers. Yet these remain the go-to solutions, and women’s careers continue to languish.

Meanwhile, another problem, whose solution could arguably improve women’s advancement and the work lives of both men and women professionals is unaddressed: the long-hours work culture. This ‘24/7’ culture pits home against work in the battle over limited hours and creates discontent for women and men alike.  Moreover, the link between long hours and productivity is tenuous at best. Considering the costs, why do we continue to trod the same work-life balance path and disregard the possibility of instituting more humane work hours?

A new look at data we gathered from interviews with 110 women and men partners and associates in a mid-sized consulting firm considers how firm members thought about women’s and men’s roles. A pervasive story—we call it the ‘work-family narrative’—describes women’s stalled advancement as stemming from conflict between women’s family obligations and professional jobs’ long hours.  The narrative makes no mention of men’s dissatisfaction with work-family conflict, which we found to be at least as strong as women’s, nor whether such long hours were necessary.

Why the focus on women’s near-absence in the partnership rather than on the taxing work hours, which averaged 60-65 per week?  Our analysis leads us to conclude that facing the sadness of the sacrifice women and men both make in meeting the demands of long-hours’ jobs is more painful than confronting the problem of a lack of women in top positions.

So the less distressing problem substitutes for the more distressing one. An elaborate—but unconscious—deflection of the problem away from the profound problem of overwork and onto women’s balancing act can help assuage these distressing feeling and maintain the firm’s equilibrium. All parties have an emotional stake in keeping the focus off the painful notion that men and women both suffer.

In the case of men, our interviews revealed feelings of guilt at neglecting family life, and in the case of women, they revealed an unsettling ambivalence about the extent of their career commitment and how much the firm values their contributions.

This situation sets the stage for protective measures to kick in.  At the employee level, they appear as unconscious psychological defence mechanisms. Men tended to split off their feelings of guilt and project them onto the firm’s women. Instead of directly feeling guilt, they identify with women and empathise with the guilt they believe they experience. This reduces, but does not completely alleviate, the emotional fallout of the hours spent away from their own families.

The dilemma women faced was more complex and less readily resolved. They had to confront the firm’s expectations that, as good mothers, they should ratchet down their hours regardless of whether they wanted to, and that, as women, their leadership abilities were sub-par. The result for women was a mix of ambivalence about being away from their families and concerns about competence that were not easily resolved at a psychological level.

At the organisational level, the protective measures appeared as the universally-held belief in the work-family narrative as the explanation for women’s near-absence in the partnership ranks and in policies like the availability of accommodations (taken mostly by women) that removed women from the path to partnership.

As a result, two strongly-held ideologies that support the status quo remain in place: long work-hours are necessary and women’s stalled advancement is inevitable. When companies address work-life balance instead of the long-hours culture, we end up with solutions that leave the partner ranks depleted of some of their brightest female stars and also leave many men continually torn between the pulls of home and work.

There is a way forward. As individual families and employees push back against overwork, and as more research shows the productivity advantage of reasonable work hours, some employers are reconsidering 24/7 work demands. If these forces gain traction, neither women nor men will feel impelled to sacrifice the home or the work domain, and women may begin to gain workplace equality with men.

Also on the overwork culture:

Irene Padavic is is Claude and Mildred Pepper distinguished professor of sociology at Florida State University. Her primary research interest centres on workplace inequality, and she has published research on how inequalities based on gender, race, and sexuality are reproduced and sometimes eroded, on motivations for joining unions, on work-family conflict, and on the barriers faced by women in the sciences and in blue-collar jobs.

Robin J. Ely is the Diane Doerge Wilson professor of business administration at Harvard Business School. She conducts research on race and gender relations in organisations with a focus on leadership, identity, and organisational culture change. Examples of her past research include studies of men and masculinity on offshore oil platforms; the impact of racial diversity on retail bank performance; and how organisational narratives about gender, work, and family limit both men’s and women’s ability to thrive personally and professionally.

Erin Reid is an associate professor of human resources and management at McMaster University’s Degroote School of Business. She studies the links between gender inequality, identity and how we design our work. One line of research examines these issues in relation to time-greedy work, a widespread workplace phenomenon. She is a ‘University Scholar’ at McMaster University, has been recognised as one of the world’s top 40 business school professors under the age of 40, listed as a ‘Radar Thinker’ by Thinkers50, and named a change agent by Canadian Business.