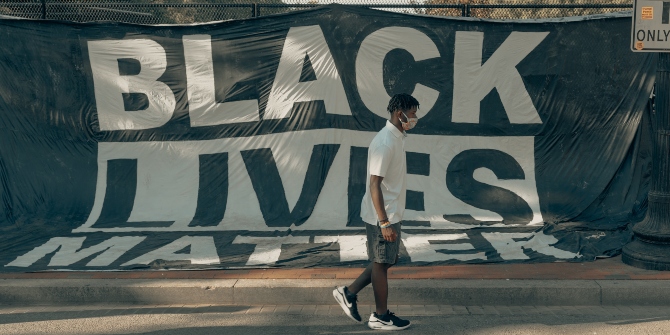 The Black Lives Matter movement (BLM) was first established in the summer of 2013 and resurfaced in 2020 after the killing of George Floyd in police custody. Protests took place across the United States bringing further attention to issues of inequality across the American criminal justice system. Social media was used around the world to show solidarity with the movement.

Companies were active participants in this social media wave of support for BLM. Nike launched a ‘For Once, Don’t Do It’ slogan, playing on their famous ‘Just Do It’ tagline, and the #Solidaritea hashtag was launched by tea brands. News articles highlighted how certain brands had very strong responses to BLM, including leading companies such as Google, Netflix, Walmart, Nascar, PwC, Nike, Ben and Jerry’s, IBM, PayPal, AirBnB, PepsiCo, and the Quaker Oats Company, among others.

Data released by Twitter showed that there were 390 million tweets sent from 25 May to 15 June, and 2020 has seen the largest peak of tweets related to BLM ever recorded. As brands actively engaged on social media, we were interested in examining what organisations have been doing in order to support initiatives around diversity in the workplace and what more can be done.

Are board compositions enough?

A recent project named ‘True Colours’ set up an Instagram page in which logos of companies were adjusted based on a whiteness filter using public data on the ethnic makeup of the executives in the organisation. This highlighted that many big companies still have a diversity issue in their senior ranks. In the United Kingdom, for instance, the Parker Review Committee, chaired by Sir John Parker, also set out to examine the ethnic diversity of UK boards.

However, a board of directors for a mid/large corporate often plays a limited role in the day-to-day management of the company. A board of directors’ main responsibility is to represent the interests of the shareholders and they are selected by shareholder vote. As such, they do not necessarily reflect the company’s diversity and meritocratic processes.

In a similar manner, looking purely at statistics by number of employees from different ethnic groups is not detailed enough to present a conclusion. For example, Rio Tinto, a large mining company with significant interests in Africa, may have a large proportion of black employees but those are likely to be at the lowest pay grade. A better practise is to understand the percentage breakdown of ethnic minorities at an organisation by their salary band.

What is the best way of doing it?

Going forward, to track organisations and hold them accountable for their diversity and inclusion initiatives, it would be beneficial for the public to have access to this data. This would make it possible to track the diversity of employees across the whole organisation.

A report by Just Capital found that only 4% (around 32 companies) from the Russel 1000 shared detailed data on workers’ gender and ethnicity by their occupation. However, in the U.S. there is a requirement for companies with more than 100 employees to report diversity and inclusion data in a report called the The Employer Information Report which is otherwise known as the EEO1 report. However, as of July 2020  out of a 100 of the largest U.S. companies by market value, only 15 made their EEO-1 diversity data available to the public. EEO1 reporting to the government is mandatory, but not to the public.

The EEO 1 report itself seems to be evolving. A proposal for a component 1 and component 2 was suspended. In 2019, certain employers were also required to report hours worked and pay data to the EEOC, referred to as component 2 data. As of this writing, the reporting of component 2 data has been suspended.

EEO1 reporting in the U.S. appears to contrast with the UK, where gender pay statistics must be made public by law for companies with more than 250 employees. However, there is no requirement for ethnic data to be released to the public. Citing the Colour of Power Index, The Guardian reported that only 4.7% of top roles in the United Kingdom are filled by non-White individuals. This index uses publicly available data and is limited to only senior roles. Similarly to the U.S., the UK government could also request organisations to release ethnic data by occupation as is the case with gender pay statistics. Releasing this information to the public would make it possible to see whether progress is being made across ethnicities and occupations.

Our future work will look to analyse social media data to identify brands making the most noise on social media and to examine the types of actions being undertaken.

Wasim Ahmed is a lecturer in digital business with a specialism in social media research in the department of marketing, operations and systems at Newcastle University. He completed his PhD at the University of Sheffield. He is a regular contributor to LSE’s Impact Blog and The Conversation. He has published multiple peer-reviewed outputs and delivered many talks about his research around the world. His research has also appeared within print and broadcast media.

Wasim Rehman is a PhD student at Imperial College London and is an active philanthropist serving as a governor of a school and as a trustee of various charities. He previously studied at the faculty of mathematics at the University of Cambridge and went on to pursue a career in finance.