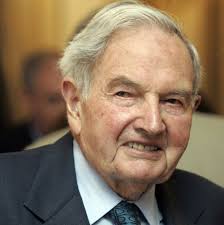 David Rockefeller (General Course 1938), who died recently at the age of 101, came to LSE to study economics under the powerful free market duo of Lionel Robbins and Friedrich (von) Hayek.

From his autobiography, it would seem he took full advantage of his time at the School, not only attending lectures by the aforementioned intellectual heavyweights but also, among others, those of the great LSE radical, Harold Laski (about whom he was actually quite scathing). While in London, David also got to know the Kennedy brothers – Joe Junior and JFK – and even for a time dated their sister Kathleen.

Urged by Robbins to continue his studies post-LSE (they remained friends until Robbins died in 1984), David made his way to Chicago, where he studied for a PhD in economics, which he was awarded in 1940 at the remarkably young age of 25.

Thereafter David Rockefeller played several important roles as a banker, independent adviser to many American governments, confidant to the global great and good, supporter of the arts, and – in keeping with the tradition of the Rockefeller family – as a philanthropist in his own right.

Indeed, David himself is credited with having donated no less than $2 billion to various good causes, including biomedical research, education, the arts, healthcare and New York City’s urban revitalisation efforts. In an age when it is politically fashionable to be sceptical about, or even hostile towards, ‘elites’  and their comings and goings, it is worthwhile remembering how one of their more generous and humane number left the world a more enlightened and healthier place than when he had first entered it back in 1915.

In many of the obituaries written this past week, little has been said about either the relationship of Rockefeller philanthropy to LSE or indeed of David’s attendance at the School.

The story about Rockefeller philanthropy itself has been told before, and in some detail, in Ralph Dahrendorf’s affectionate and detailed biography of LSE published in 1995. The basic facts are well known. After the First World War, the Rockefellers began to take the social sciences increasingly seriously and, led by the remarkable Chicago-trained political psychologist Beardsley Ruml, contributed enormously to the School, both in terms of LSE’s actual fabric and in supporting serious research across the board. Although not the School’s only source of income in the inter-war period, the Rockefeller support (notably between 1923 and 1937) was certainly of great importance in helping LSE to become regarded as a world class research institution by end of the 1930s – one which to the present day seeks to use the knowledge it creates to understand the causes of things and improve society.

Furthermore, the Rockefellers’ connection to LSE tells us much about the wider and invaluable relationship the School has always had – and continues to have – with the United States. Put simply, LSE has welcomed many thousands of brilliant American students and faculty to Houghton Street over the years, from the sociologist Talcott Parsons through Paul Volker and Daniel P Moynihan, and onto Supreme Court Justice Anthony M Kennedy, who was the swing vote in 2015 establishing a constitutional right to same-sex marriage.

Throughout the School’s history, US alumni have left Houghton Street and gone on to influence government, politics and society. David Rockefeller was one such person – a prominent and distinguished inter-war American LSE alumnus who left an indelible mark on the world.