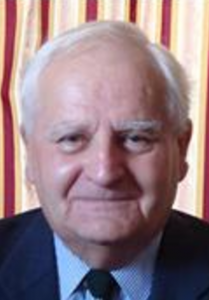 It is with great sadness that we announce George Jones, Emeritus Professor of Government, died on Friday 14 April 2017.

George Jones was a stalwart of the Department of Government for over 50 years, having arrived at LSE as a lecturer from the University of Leeds in 1966, and remaining active – teaching on GV311 during 2016-17 while attending seminars and other events until the week of his death. His work concentrated on the office of Prime Minister, the Cabinet and, particularly, local government. He believed in intellectual integrity and the straightforward expression of ideas – he would, on occasion, describe someone as a ‘simplifier’ of a particular complex field. He was such a simplifier himself. In 2009, he was made an Honorary Fellow of the School.

His doctorate was about the borough politics of his home town, Wolverhampton, published as Borough Politics. His intense interest in politics and the interaction between the personal and the political led him to write, with Bernard (now Lord) Donoughue Herbert Morrison: Portrait of a Politician (London Weidenfeld and Nicolson, 1973) which was re-issued with a foreword by Morrison’s grandson Peter Mandelson in 2001.  He much admired Morrison’s approach to politics and government.

He wrote about advising the Prime Minister and Cabinet with Michael Lee and June Burnham in At the Centre of Whitehall (Basingstoke: Macmillan, 1998); and edited a study of prime ministers entitled West European Prime Ministers (London: Frank Cass, 1991). He was author of the first study of the private secretaries of prime ministers in “The Prime Ministers’ Secretaries: Politicians or Administrators?” which was published in From Politics to Administration, J.G. Griffith (ed.), (London: Allen and Unwin, 1975). In 2013, he wrote (with Andrew Blick) At Power’s Elbow: Aides to the Prime Minister from Robert Walpole to David Cameron (London: Biteback Publishing, 2013).  In all of this, he enjoyed the cut-and-thrust of politics, including insiders’ insights and the easy familiarity within the confines of Whitehall.

George was a critical friend to the UK’s traditional Westminster system, believing in two party politics, vigorous Parliamentary debate, and offering voters clear choices. But he was a dogged critic too of uncorrected defects in the model, especially the chronic over-centralisation of powers in Whitehall, the decline of Cabinet government and collective responsibility, and Labour’s periodic lurches into uncompetitive policy stances.

His final book, written with Steve Leach and John Stewart, Centralisation, Devolution and the Future of Local Government in England, will be published this summer. Its subject is entirely apt, because a concern for the autonomy and democratic protection of local government was a major element in George’s work throughout the period since he had sat on the Layfield Committee from 1974-76.  He and Professor John Stewart (University of Birmingham) were long-time co-authors of books and articles. For many years they co-wrote a column in Local Government Chronicle.

George was a fast, generous and precise editor. Chapters and articles would be turned around within a day or so, and he always delivered material on time.  He was also a mentor to younger colleagues and was never distant or grand. Latterly, he played Father Christmas at the School’s annual children’s party each December.

His teaching style was clear, authoritative and even combative. He provided an objective analysis of aspects of British government, but made it clear where his personal sympathies lay. He was not, for example, particularly keen on Parliamentary select committees, preferring the floor of the House of Commons as a forum for the exposition of politics and the achievement of accountability. Nor was he an enthusiast for directly-elected executive mayors, preferring more dispersed leadership.

In the years immediately before his retirement, he co-chaired the Greater London Group with Professor Derek Diamond of the Department of Geography.  Throughout his long career at LSE, he was responsible for sustaining the School’s study of London, having spent many hours in Monday afternoon seminars (held in room ‘A588’ as it was then called) led by the Group’s founder, Professor William Robson.  Robson was a protégé of Sidney and Beatrice Webb – thus, George was one of those colleagues who embodied a linear connection with the School’s founders.

He was also much involved with other academic institutions at home and abroad, notably the Institute of Local Government Studies at the University of Birmingham. Beyond universities, he sat on a number of committees and boards. He had been on the executive committee of the Royal Institute of Public Administration and in the 1990s was appointed to the National Consumer Council. He received an OBE for his work at the latter.

Outside work, he loved the cinema – Laurel and Hardy were a favourite. He was an expert on American film noir and Westerns, and kept a methodical record of films seen and his reviews of them.  He was also a keen reader of political biographies and diaries.

His presence at LSE seminars, in the SDR and at reunions will be much missed.

(With acknowledgements to Patrick Dunleavy and Brendan O’Leary)