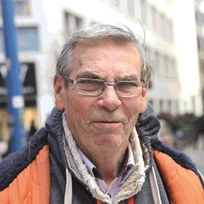 It is with great sadness that LSE announces the death of Vic Finnigan. Vic retired from LSE in 2014 as Head Porter after 25 years of service.

At Vic’s Leaving Do, I said to those assembled:

“I think you would all agree Vic is one of those people who you simply won’t forget. I would describe him as a rough diamond and one cheeky bleeder. You and your lads do a tough job in all weathers, with good humour and are vital to the smooth functioning of the School and it is because of this, you generate genuine respect and affection.”

And yes mate (that’s how he referred to men and woman alike!) you will indeed be fondly remembered by all of us who had the pleasure of knowing you.

Having spent 25 years at LSE, Vic was part of the furniture, he knew everything and everyone. Like me, I’m sure there are many of you that enjoyed listening to his stories; and boy did he know how to tell one! He was the go-to man to get stuff done and would never pass you by without stopping and saying hello (usually with a fag hanging out of his mouth!)

Mate! you will be missed, you were one of a kind. There is only one way to describe Vic – A legend!