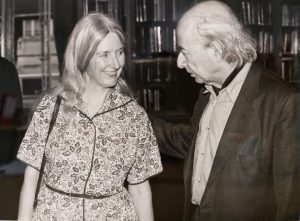 Lucien Paul Foldes (1930-2021) is remembered as a much respected pioneering innovator of mathematical finance, mediating between the fledgling theory of mathematicians and established economic theory, with martingale utility-gradient methods his legacy. Engaging and collegial, quiet but sharp-witted, impeccable in both style and mathematics, he was a true gentleman of the old order – born in Vienna of Austrian-French-Hungarian parentage. Orphaned (in 1935) by the loss of his father, he emigrated to England in summer 1938 with his mother, ordained by an employment-bound visa to a post as cook to Professor Morris Ginsberg (LSE Sociology). At their hosts’ instigation, he attended Bunce Court School in Faversham, Kent (1938-1945) and Monkton Wyld School in Charmouth, Dorset (1945-1947), both progressive, then as a second-year entrant into LSE (from Regent Street Polytechnic) he read for the B. Com. (Industry and Trade), Professor Sir Arnold Plant being his tutor. In 1950 he gained First Class Honours and in 1952 an MSc. (Econ.) in Business Administration. Appointed in 1951-52 Assistant in Economics at LSE, then in 1954, on returning from compulsory National Service, Assistant Lecturer, he was promoted to Lecturer in 1955, Reader in 1961 and Professor in 1979, he retired in 1996 as Emeritus Professor of Economics, remaining throughout a member of the Financial Markets Group and the Systemic Risk Centre.

Earliest research focussed on theoretical problems of costs, capital, welfare and uncertainty, alongside `applied’ questions of pricing policy, financial control and regulation of industry. In the 1950s his thesis-led research concentrated on delegation in budgeting and control of public enterprise. During the 1960s he turned to microeconomics and welfare (investment, redistribution, monopoly) then to quantitative decision models, with focus risk and uncertainty. Deeper immersion into mathematics (analysis and probability theory – self-taught) produced a foundational contribution on expected utility and then a slew of papers in stochastic analysis of risk in investment decisions.

Among the first to use martingale methods in financial theory as optimality conditions, he was first to model price processes with general semimartingales and to introduce random measures into investment modelling. As recognised expert, he lectured on Semimartingale Calculus in Portfolio Theory at the 1992 Oberwolfach Conference on Mathematical Finance.

Later he extended this framework to the Ramsey-style, Arrow-Kurz growth model encompassing a production function whereby capital (and population, the supplier of labour) determines output, introducing Brownian uncertainty into the various components. Here his martingale condition reduces to a pair of first-order nonlinear ODEs. These connect `average propensity to consume out of capital’ and `elasticity of consumption with respect to capital’. Phase-plane arguments  for economically significant parameters establish uniqueness of a trajectory through the unique pair of stable and unstable asymptotic nodes of the system (as capital tends to high or low levels) yielding the optimal consumption function. His geometric approach draws in novel tools from stable manifold theory, indicating the impact of perturbing economically significant parameters. This bears `on important classical questions of economic theory [whose resolution] should supersede various scattered results in the literature…[despite not being] related directly to statistical data…’ (Foldes).

His continued investigations were slowed by the poor condition of his heart, and his passing was precipitated by an accidental fall. He leaves widowed Carol Foldes, his constant mainstay and devoted wife (one may add also his tex-amanuensis) in a partnership of over 50 years, also forged within the LSE community.

This entry was posted in Department of Economics. Bookmark the permalink.