Posted on May 25, 2021 by Internal Communications 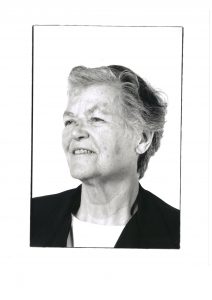 Ailsa H. Land (nee Dicken) died on 16 May, aged almost 94. She was born in West Bromwich, Staffordshire in 1927 and grew up in the West Midlands. In early 1939, in the face of the coming war, she and her mother travelled to Canada.  She remained there for the next five years, finishing school, and in 1943 enrolling with her mother in the Canadian Women’s Army Corps, requiring her to pretend she was older than her actual age. She ended her military service in 1944 in Ottawa at the National Defence Headquarters. She and her mother then returned to the UK to re-join her father who had been in the RAF. She came to LSE in 1946 as a student on the BSc(Econ). LSE was to be the home for her professional life thereafter.

Graduating in 1950, Ailsa became a Research Assistant in the Economics Research Division at LSE. In the same year she met her husband-to-be, Frank Land, who was also an LSE graduate and Research Assistant in the Economics Research Division, and they married in 1953. Alisa’s academic interests were and remained ‘activity analysis’ and its application, in today’s terms mathematical programming, scheduling and optimization. Her PhD was awarded in 1956 on the application of Operational Research techniques to the transportation of coking coal.

Her LSE career developed over the next 25 years as she progressed from lecturer to professor, in 1980, and head of the LSE Operational Research group. She and Frank, who was LSE professor of Information Systems, raised a son and two daughters, and their family grew with 7 grandchildren and 2 great-grand-children. She retired from LSE in 1987 but continued to work on optimization problems.  In her words at the time, ‘Now I’m retired I can do some research!”

Among Ailsa’s major academic contributions is the Land-Doig algorithm for branch and bound optimization with integer variables, work undertaken with Alison Doig, now Alison Harcourt[i]. Professor Richard Steinberg,  Chair in Operations Research in the Department of Management writes about the Land-Doig algorithm: “It is used to solve mathematical optimization problems where the solutions need to be whole numbers, which includes an enormous number of important practical problems.  The naïve approach to such problems is to enumerate every possible solution and then choose the best one, a Herculean, often impossible, task.  Branch-and-bound is a devilishly clever enumeration procedure that eliminates large swathes of inferior solutions in one go, often saving huge amounts of computation time and, in many cases, making an otherwise-unsolvable problem solvable.   Ailsa’s paper with Alison on branch-and-bound, published in Econometrica in 1960, has been cited and applied literally many thousands of times.”

Notably, Ailsa’s work on optimization took an economist’s perspective rather than that of a mathematician. Her book of Fortran Codes for Mathematical Programming [ii], work undertaken with Susan Powell, set a standard for open shared code and its creative documentation. Throughout her career she engaged with and contributed to the solution of practical problems with an undimmed sense of the potential for radical ideas and she was critical of the abstract and narrow mathematical research focus that became prevalent in Operational Research.

In 1994 she was awarded the Canadian Operational Research Society Harold Lardner Prize, and in 2019 the Beale Medal of the British OR Society, which is given in recognition of a sustained contribution to OR in the UK. The citation for her Beale Medal award well summarised her contributions: “Her work in branch and bound reshaped the field of mathematical programming and its influence continues to this day… In addition, Ailsa Land has advanced the methodology of OR through publication of significant work on shortest path algorithms, quadratic programming, bicriteria decision problems, and statistical data fitting… Since retirement from LSE in 1987, she has continued research projects, resulting in contributions to Data Envelopment Analysis, Combinatorial Auctions, and the Quadratic Assignment Problem.” [iii]

Ailsa was the first woman in the UK to hold a full professorship in Operational Research. In the 1980s, she was a rare woman professor role model at LSE. She led the Operational Research group confidently, avoiding institutional entanglements and creating a research environment that allowed her, her colleagues, and her students to pursue their intellectual interests.  Her impact on the development of her discipline is underlined by the stream of PhD students, who rose to eminence world-wide. LSE now offers an Ailsa Land Prize  for the best overall performance by a student on the MSc Operations Research & Analytics.

The combination of impactful academic work, raising a happy family and being active in your community is a tall order. Ailsa showed us it can be done in a gracious manner, and her reassuring beautiful smile was precious source of encouragement and optimism for all of us lucky to have known her.

This entry was posted in Department of Management. Bookmark the permalink.