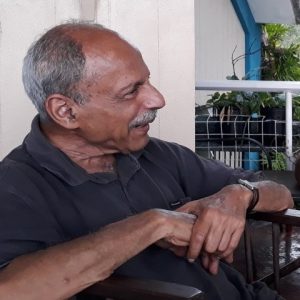 It is with great sadness that we announce the death of Athar Hussain. Athar died peacefully in hospital in October 2021 after a long illness. His wife Jill Hodges and their daughter Lalla were at his bedside. He had been a devoted and prolific Research Fellow at LSE for almost three decades,  funded by commissions and grants. He was a member of the India Observatory and Head of the LSE South Asia Research Centre.

His fields of research were development economics, alongside welfare and public policy – richly comparative because the areas of his research included not only his native Pakistan but also India, China, and more recently Vietnam. Before these more empirical policy studies he was engaged in more theoretical expositions and critiques. Throughout he was a congenial collaborative researcher and co-author.

Professor Nick Stern recalls an outstanding intellectual with an extraordinary range of interests and skills (plus a mastery of a range of languages including Chinese):

“We met first as graduate students in 1968 in Oxford and I learned from him continually over a friendship of over more than half a century. In our early days we discussed a lot of economic theory, planning, and public policy. He appeared to have read everything from serious philosophy to the most mathematical of modelling. It was as a scholar of China that he was probably the best known and so many of us would look to him for guidance.

“He could discern not only the big picture and the arc of history but also the details of what was actually happening. I remember him at a joint meeting of the British Academy and the Chinese Academy of Social Sciences carefully explaining the functions and difficulties of the Hukou, or household registration system, in a way that was really helpful to many China scholars. He was also an immensely kind person always ready to help including, in my case, lending a splendid ‘flying pigeon’ bicycle for me to use in Beijing. He contributed to LSE including for an extended period as head of the South Asia Research Centre.

“Athar brought many Chinese students to the school, some of whom worked closely with us in STICERD. One of them, Wang Limin, has written that the many waves of young Chinese officials taught by Athar received economics training and were helped to connect research directly with policy-making, and many of them are now working in high places in China.”

Professor Stephan Feuchtwang recalls an intellectual, a work comrade and a friend:

“He was an important part of my life. We had each read Marx’s main works carefully. He and I shared a network of critical Marxists. He co-authored with Keith Tribe studies of Marxism and the agrarian question, with Paul Hirst and others a study of Marx’s Capital and capitalism today, with Mark Cousins a study of the thought of Michel Foucault, and with me studies of the Chinese economy in the nineteen eighties. More recently he did me the favour of asking me to join him in a team of researchers to study urbanisation in China, in this century.

“As a personal friend I fondly remember his acquisitiveness of languages, not just Chinese but Italian. One vivid memory is of us walking up a mountain in the Apuan Alps, he plugged in to a taped Italian lesson. Then he acquired a capacity to read Chinese economic and demographic statistics, having learned the characters for their categories, so as not to rely on their translation into English. From there amazingly he learned through friendship with Chinese colleagues to speak and collect from them idioms and colloquialisms. I had spent university years learning to read Chinese and many months in China to speak. He put me to shame. My parental language is German, and my second language, after English is French. Athar could speak and read German and French better than me, and now threatened to better me in Chinese, though not in Italian.

“I am indebted to his analyses of Chinese economies in many ways. When we organised the seminars that resulted in our volumes on the Chinese Economic Reforms in the Eighties, he was indispensable not only for his study of the Chinese economy, but also in providing comparisons with the Hungarian and other “post-socialist” economic reforms. In the core course of the master’s degree I designed at LSE on China in comparative perspective, his papers on post-socialist “transition” and on the financial sector in the new Chinese economy were indispensable.

“I am grateful in particular for two key contributions. One is the measure of excess deaths that can be gathered from Chinese official statistics as a measure of the Great Leap Famine, 1959-61. The other is that the post-Mao economic reforms should not be judged merely in terms of orthodox economic notions of efficiency, but to see the creation of labour-intensive industrial units as increasing employment and the spread of income.

“We both treasure our times and our work together with him. We will miss him.”

This entry was posted in Uncategorized and tagged Athar Hussain, South Asia Centre. Bookmark the permalink.