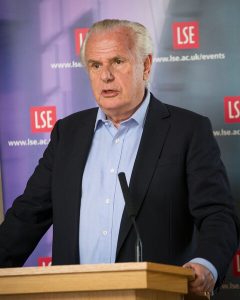 LSE is deeply saddened by the death of Paul Myners, Lord Myners, who died aged 73 on January 16.

The former Marks and Spencer chairman and City minister in Gordon Brown’s government, joined LSE in 2015 as Chair of the Court of Governors and Council. He used his business and financial skills to ensure that the School remained financially robust and to underpin its strategic aims. In particular, he supported the School’s ambitious campus development, including the Centre Building and the Marshall Building. He also oversaw a review of School governance and management structures to reinforce effective management and oversight.

A bold and colourful character from humble beginnings, he was committed to the role of education in facilitating social mobility. He supported the vision of the school to engage, to modernise, to attract the best students and academics, and to compete internationally with the world’s top universities.

In an interview with the Financial Times published in 2016, Lord Myners said he found his work with LSE very fulfilling and that he enjoyed interacting with students on campus. He explained how he relished going to the School’s Garrick restaurant to speak with them to find out how their experiences could be further improved.

He combined his posts at LSE with several financial roles, including positions at RIT Capital Partners, Autonomous Research and Cevian Capital, and at Edelman, the PR firm.

His distinguished and varied career began with short stints as a teacher and a journalist. He moved into the financial sector in 1974 as a junior portfolio manager at N M Rothschild & Sons and was appointed to the board just three years later. He then became CEO of the pension fund manager Gartmore in 1985 and its Chair in 1987, spending the majority of his City career there until 2001. He was awarded a CBE in 2001.

From 2004 to 2008 he chaired the Tate, presiding over a period of considerable development in both the collection and the fabric of the galleries themselves. He was the Chair of Marks and Spencer from 2004-06. Other past chairmanships include the Guardian Media Group, Land Securities and the Low Pay Commission. He was also a member of the Court of the Bank of England from 2004-2008. These chairmanships were relinquished when he was created a Life Peer in 2008 and became Gordon Brown’s City minister, responsible for overseeing the financial services sector during the global financial crisis, including leading the historic bank rescue package. He sat in the House of Lords as a Labour peer until 2014, resigning to become a non-affiliated member before joining the crossbench group in 2015. In 2016, he became University Chancellor of the University of Exeter.

Outside business and public service, he was a passionate supporter of Chelsea Football Club.

Gordon Brown led tributes to Lord Myners: “After a successful career in finance, he was persuaded in 2008 to enter public service and was a tower of strength, helping nationalise key banks and producing a plan to overcome the global financial crisis. His charitable work in his native Cornwall will be long remembered.”