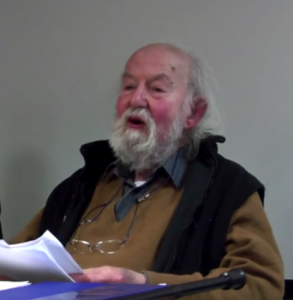 We are sad to announce the death of James Woodburn, a former colleague and one of the best-known researchers and writers on hunter-gatherer and egalitarian societies. He studied History as an undergraduate in Cambridge, then did national service, later taking an interpreter course in Russian. He returned to Cambridge, this time to do a BA in Archaeology and Anthropology. He conducted fieldwork in (then) Tanganyika, graduating in 1964 with a thesis entitled ‘Social organisation of the Hadza of North Tanganyika’. The Hadza remained his long-term field project; it was on the basis of this research that he developed his renowned insights into immediate- and delayed-return systems. He also collected Hadza material culture for the Horniman museum. While lecturing in our department, he supervised numerous doctoral students, including Roy Ellen, Jerome Lewis and Thomas Widlok, and played a particularly strong mentoring role to several African students, including Bwire Kaare and Wolde Gossa Tadesse. Two of his former students, Thomas Widlok and Wolde Tadesse, held a colloquium in his honour at the Max Planck Institute in Halle, later publishing the proceeds in a two-volume festschrift entitled Property and Equality (Berghahn). He remained a keen participant in the scholarly enterprise long after retirement, and was an honorary member of the International Society of Hunter-Gatherer Research. He regularly attended our Malinowski Lecture and went to CHAGS conferences, co-hosting one at LSE in 1986 and attending the last one in Malaysia in 2018.