Despite rising unemployment and a lack of economic growth, Greece cannot afford to ignore the challenge of controlling inflation.

Despite rising unemployment and a lack of economic growth, Greece cannot afford to ignore the challenge of controlling inflation.

Since the beginning of the eurozone crisis, Greece has experienced a sharp fall in GDP and a large increase in unemployment. Nicholas Apergis argues that another policy challenge facing Greece is also highly significant: controlling inflation. Assessing the inflation dynamics within the country between 1981 and 2009, he outlines three dynamics important to understanding Greek inflation: inflation persistence, inflation spillovers between sectors of the economy, and the domestic ‘Balassa-Samuelson’ effect.

The study of inflation is of fundamental importance since it can have far-reaching implications for the economy both in terms of economic efficiency and wealth distribution. This is reflected in the mandate of many monetary authorities to maintain price stability. Such central bank institutions pay special attention to the development of tools enabling them to better understand and monitor the properties of inflation dynamics.

Inflation is also a costly business. High inflation results in a redistribution of wealth from those with fixed incomes to those with flexible incomes and reduces real returns on savings and investments. Over the short-run, the structure of the consumption basket plays an important role for inflation. Thus, for given price shocks, inflation is expected to be higher in countries with higher energy and food price shares in the consumer basket.

Inflation in Greece characterizes the international competitiveness of the economy and it is one of the most important topics in the ‘policy dialogue’ between the country’s authorities and the ‘troika’ (the European Commission, European Central Bank and the International Monetary Fund). This is especially the case for an economy with weak international competitiveness as well as weak institutions, making it particularly difficult to control inflation. The economy is experiencing inflationary pressures, which are mainly due to the lack of strong competitive forces in particular sectors in the economy and to high indirect taxes imposed through the agreement of the country with the ‘troika’s’ supportive bail-out programme.

We have attemped to explain inflation dynamics in Greece over the period 1981−2009 using three distinct approaches: the inflation persistent hypothesis, the identification of spillovers among various sectors in the economy and the investigation of the domestic Balassa-Samuelson effect.

Understanding ‘inflation persistence’ is important for monetary authorities as it allows them to make a distinction between structural and shock-induced inflation effects. Monetary authorities such as central banks can entirely control inflation rates in the long-term, but they cannot entirely control inflation in the short-term as macroeconomic shocks can have temporary impacts on the inflation rate. Therefore it is highly important for them to know the speed at which the inflation rate returns to its long-term trend after a disturbance.

The Pattern of Greek Inflation

Figure 1 depicts the Consumer Price Index (CPI) and GDP deflator inflation series over the period 1981-2009 in Greece, while for the core inflation the sample spans the period 1989-2009. The three series tend to move roughly in a parallel fashion. In the 1990s, special attention was paid towards controlling large fiscal deficits and lowering the high inflation rate as serious efforts to meet the criteria of the new European currency programme were made. In particular, from 1991 to 1994, a tight monetary policy, a tight fiscal policy and a slower devaluation of the exchange rate were the key factors that helped Greece to exhibit for the first time after 20 years single-digit inflation rates. This convergence continued until 1998 when the drachma joined the European Exchange Rate Mechanism (ERM). Thereafter, inflation remained at very low levels until 2009. 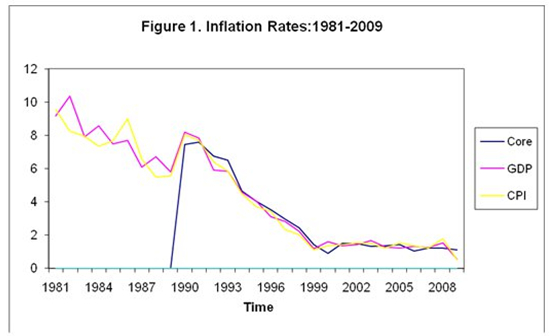 Our findings provide little evidence of strong inflation persistence. The majority of the disaggregated series are characterized by a low to moderate persistence. The lowest persistence is shown in food, vegetables, clothing and footwear since they are largely affected by either seasonality of harvesting or by the end of season sales. By contrast, housing and equipment display a relatively high degree of persistence.

Our results also pointed to the need to account for the presence of a structural break in all of the inflation series under investigation. The break was typically related to the ‘Maastricht effect’ and entailed a structural increase in the persistence measure, though the average level of inflation declined. This could be a piece of evidence that although the monetary component of inflation in Greece was neutralized due to the implementation of the monetary policy by a central monetary authority, other idiosyncratic characteristics of Greek inflation, such as non-competitive forces in many sectors in the economy as well as high public deficits, could have contributed to this persistent structure of the inflation series.

The reaction of inflation to fuel price movements suggests that inflation has a negative impact on investment, through a rise in firms’ costs and higher uncertainty, leading to postponement of investment decisions and, thus, to lower production and, through conditions of excess demand, to further higher prices. The objective as well as the novelty of this part is to investigate the behaviour of various CPI components in terms of their spillover behaviour.

In Greece, some components of the price index exhibit a differentiated behaviour and the relationship with disaggregated price indices may differ among them. It is also clear that it is hard to predict the part of inflation that is not related to domestic economic variables. For instance, fuel prices, which are an important cause of inflation, cannot be predicted with an acceptable degree of accuracy. Hence, our main research question is: ‘What is the nature of the causality between price inflation indices?’

Our empirical analysis highlights the causality running from fuel prices towards the other CPI components. Any rises in fuel prices passes on to the remaining parts of the economy and from the consumer standpoint the energy bill grows, whereas firms have to contend with a rise in unit costs, and, therefore, in their charging prices. Thus, such rises in fuel prices represent an inflationary shock that is accompanied by second-round effects and any oil price increases affect mainly the conditions of the supply side in the Greek economy since energy is the primary input of the production process. As a result, the cost of production increases.

The above findings imply that Greek economic authorities cannot afford to worry only about growth and unemployment, but also about inflation. The Greek inflation problem can be handled either through the channel of tax policy or, primarily, through the deregulation and the opening of certain sectors in the economy characterized by monopolistic or oligopolistic conditions as well as through stronger labour market flexibility (structural economic reforms). The lack of open markets impedes competition from driving down prices. Greece is considered to be the least ‘trade open’ economy among the remaining EU members, with trade covering only 15 per cent of GDP. This feature of the economy makes the life of domestic monopolistic markets easier, as competition from abroad is restricted, leading to price accelerations.

The empirical literature provides evidence for the presence of significant inflation differentials in the euro area and the effect on the competitiveness of participating countries with higher inflation. The competitiveness of a particular country will be affected to the extent that the inflation differential between its significant trading partners is due to higher prices in the non-tradable (generally services) sector. A rise in the productivity of the tradable sector (mostly manufacturing and agriculture), often exhibited by countries in the process of ‘catching-up’ economically, leads to higher wages in both tradable and non-tradable sectors as the wage increase spreads across the whole economy. This causes a simultaneous rise in the relative price of goods produced in the non-tradable sector, while the relative productivity of the sector has not grown.

The magnitude of the process known as the ‘Balassa-Samuelson’ effect is of considerable interest for policymakers in European Monetary Union candidate countries and relevant European Union institutions. If the productivity growth differential between the traded and non-traded goods sectors is larger in a candidate country than in the euro area, then overall inflation will be higher in that country. Monetary authorities are coerced to implement a restrictive monetary policy to meet the inflation criterion, a case which could threaten economic growth targets. Under a floating exchange rate regime, it will result in a combination of higher inflation and appreciation of the nominal exchange rate.

This part of the project gauges the magnitude of the Balassa-Samuelson effect for Greece to determine the extent to which its inflation differential with the euro area is contingent on it. Greece is a country that today has lower per capita income than most of the other European countries, higher productivity in the tradable sector, while its inflation is considerably above the euro-area average, hence, it is worthwhile to evaluate the proportion of its inflation attributable to the Balassa-Samuelson effect.

The empirical results show that the large size of this effect indicates strong persistence of relative price changes, especially in the sector of tradable goods; this could be the primary reason for balance of payments disequilibria and, therefore, one of the reasons for the persistent worsening of balance of payments deficits. Given the fact that in Greece productivity increases were higher in manufacturing than in services while, at the same time, unit labour costs exceeded productivity measures in both sectors, service prices could be higher than those in manufacturing. Despite the presence of lower productivity in the services sector, it seems that the increased demand is not counterbalanced by a rise in the quality of offered services, resulting in higher priced services. Rising wages also intensify inflation pressure in the non-tradable sector, deteriorating the international competitiveness of the Greek economy.

Overall, the domestic Balassa-Samuelson effect is present for the case of Greece. In that case productivity differentials between the two primary sectors seem to have a substantial positive effect on inflation (estimated to be 33 per cent). These productivity differentials seem incapable of affecting relative competitiveness between the two sectors and, to a great likelihood, will disappear when real convergence between them will be achieved.

This article is a summary of Professor Apergis’ Hellenic Observatory research seminar: Stylized Characteristics of the Greek Inflation: Some Policy Recommendations held at the LSE on 9 October, 2012.