Many politicians choose to pursue a role in business following the end of their political careers. Pau Castells and Francesc Trillas assess whether the presence of former politicians in large businesses should be a cause for concern. They write that while in theory politicians might give companies unfair lobbying advantages, in reality this does not always lead to increased success. Using evidence from Spain, they show that Spanish companies have actually been worse off on average in the immediate aftermath of employing former politicians. Nevertheless, the presence of politicians may still give businesses unfair advantages in certain situations, such as in the case of government bailouts.

The Economist recently published an article arguing that the influence of big business in politics was excessive. The appointment of individuals with a political past, or with political connections to the board of directors of private companies, is potentially one of the tools that businesses have available to them in order to influence public policy decisions. Of course, it can also be argued that some former politicians have other skills in addition to access to government and its decision-making channels. But the presence of political staff on the boards of directors of large private companies has become a concern regarding the functioning of our democracies and our corporations.

The extent of the phenomenon has been documented by systematic empirical evidence in countries as diverse as Indonesia, Germany (historically at the time of Hitler and also contemporaneously), France, and the United States (including the evolution of companies connected with former Vice President Dick Cheney and those connected with former Treasury Secretary Timothy Geithner). The phenomenon therefore has a huge international scope and is present in both developed and developing countries.

There is also anecdotal evidence for countries such as Chile and South Africa – where some of the main leaders of the African National Congress, the party of Mandela, have been co-opted by companies traditionally in the hands of the white minority. One surprising aspect is that in some cases there is a negative association between the presence of former politicians and business performance, while in other cases this association is positive. Acemoglu and his coauthors, in their study of firms connected to former US Treasury Secretary Geithner, suggest that factors driving this association to be positive include a weak institutional framework and high discretion in making political decisions (which is more common for example in times of crisis).

Spain is one of the countries where our preliminary investigation (see here and here) points to a negative correlation between political connections and business returns: measured both through the valuation of the firm in the financial markets at the time of an appointment, as well as using the companies’ accounts as the basis for the analysis. It thus may seem on average counterproductive for corporations to appoint former politicians. This negative correlation should however be interpreted with caution – in the sense of not exaggerating causality – since firms in financial difficulties may tend to desperately ‘hire’ politicians, or because regulated firms tend to appoint more politicians, and regulation may minimise the benefits that politicians can provide. But it is noteworthy that in Spain there is no evidence that shareholders gain by the appointment of former politicians to the boards of directors of their companies.

Overall, the phenomenon is widespread in Spain: about one-fifth of the directors of major companies have a political past. For the approximately 70 largest Spanish companies that we have analysed to date, it is very common to have between 20 and 30 per cent of former politicians on the board of the company.

Two former prime ministers hold positions in regulated companies, and the three most recent former economy ministers accepted positions in large regulated companies shortly after leaving the government (the current economy minister was a director in the electricity firm Endesa until the day of his appointment as minister). In some cases they met the legal period of two years in which they cannot hold positions in companies that they regulated, but in some cases they blatantly violated the spirit of the law by accepting  positions in subsidiaries located abroad (e.g. Elena Salgado in Chilectra, a subsidiary of Endesa in Chile).

One could argue that prime ministers and ministers of economy must be individuals of a high professional caliber, and therefore the appointment is not an attempt at lobbying. However there are cases of individuals without a strong professional reputation, such as Javier de Paz (Telefónica) or Angel Acebes (in Iberdrola), who have also served on the boards of large companies.

The strategy of appointing directors is widespread and has been sustained over time. For example, a pharmaceutical company had among its directors the former conservative minister Loyola de Palacio, and later the former socialist minister Carlos Solchaga. This might suggest that the phenomenon is the same for politicians of all colours. However, while certainly the phenomenon knows no ideological barriers, similarly to what Albert Solé of the University of Barcelona and his coauthors find in the case of local politics, it is the conservative PP who has more former politicians on boards. This was the case even in those years when the socialist PSOE ruled in Spain, as shown in the following Chart, based on approximately the 70 largest Spanish companies according to their market value. 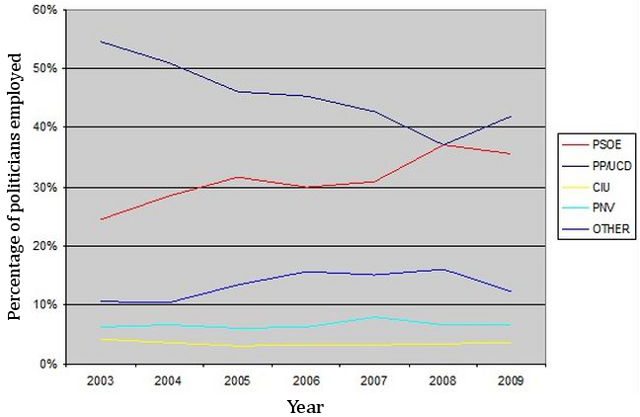 Note: The chart shows the political parties/groups that politicians employed by Spanish companies were affiliated to. The figures are percentages of the total number of politicians employed with Spanish companies (approximately the 70 largest companies). The parties/groups are the Spanish Socialist Workers’ Party (PSOE); the People’s Party (PP); Convergence and Union (CiU); and the Basque National Party (PNV).

The particular case of Spain can be used to reflect on what may be behind the negative correlation that sometimes occurs between companies’ results and political connections. One might think that this negative correlation is the result of the correct functioning of the institutions: although they try, lobbying does not fructify. However, an alternative interpretation could be that managers collude with politicians to protect themselves against potential takeovers at the expense of shareholders, or in order to “expropriate” minority shareholders.

Our findings would point in this direction. Here we see how on average listed companies were not affected by the surprise victory of the socialist party (PSOE) in 2004, but the most politically connected were, and usually in sectors such as energy, with companies which were at the time subject to waves of takeovers. A third interpretation, not inconsistent with this, would be that managers, when they propose the appointment of former politicians, incur a behavioural availability or saliency bias, in much the same way that tall centre-forwards, for instance, are overvalued in the transfer market of football players. Similarly, famous politicians would also be overvalued in the market for directors of large companies.

One might also think that if the presence of former politicians does not result in positive outcomes for companies, the public should not worry about this phenomenon. However, this is not the case in regulated sectors or for companies which are too big to fall (which is where the presence of former politicians is larger). In both these cases the regulatory systems have a tendency to at least cover the costs of firms. In such instances, higher costs due to poor corporate control, caused by the presence of former politicians, will tend to result in higher prices for consumers or high bailout costs when necessary. We need only think of Bankia, the largest bank that was bailed out by the Spanish government with EU support, which was chaired by former finance minister Rodrigo Rato at the time of the bail-out.

Pau Castells
Pau Castells is a senior economist in the UK Government Economic Service, London. His professional experience includes both work as an applied economist in the financial sector, as well as in several central Government departments. He specialises in economic regulation and public policy, in particular in the energy and ICT sectors. He has a PhD in economics for the Autonomous University of Barcelona.

To ensure Europe’s future competitiveness, policymakers must do more to integrate markets and remove the barriers that are holding back new firms and young innovators.

A European federation of states is the only form of integration which has the chance to preserve freedom and survive shifting power relations between sovereign nations.