Today EUROPP launches the second episode in our voxEUROPP series of podcasts. Presented by Chris Gilson and Stuart A Brown, voxEUROPP draws on academic experts from EUROPP to discuss the latest issues across European governance, economics, politics, culture and society, both at the European Union and national levels. 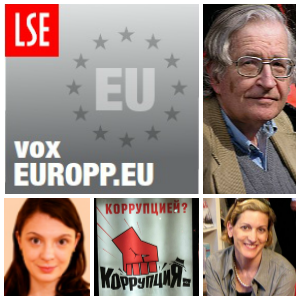 In this voxEUROPP episode we hear from specialists on politics in Eastern Europe and take an in-depth look at Europe’s austerity policies. Anne Applebaum, LSE’s 2012-2013 Philippe Roman Chair in History and International Affairs, speaks about the overreaching effects of ‘Putinsim’ on Russia’s economic system and democratic processes. Romanian Expert and LSE PhD student, Clara Volintiru, discusses the referendum on the country’s presidency and whether or not the EU could do more to support democracy in the country. Renowned political critic Professor Noam Chomsky talks about the long-term effects of European austerity policy in our final “Future of Europe” segment.