Does immigration have a positive or negative impact on native populations? Nicole B. Simpson and William Betz have analysed data on immigrant flows to 26 European countries between 2002, and have found that immigrants have a positive impact on the happiness and well-being of natives, especially after the first year. While the overall positive impact may be a small one, they do mean that the potential costs of immigration on natives, such as impacts on wages and employment, may be balanced by its benefits.

With international migration reaching unprecedented levels of importance on both national and international policy agendas, the need for reliable studies that identify and analyze the effects of migration has never been more crucial. While there is a large literature documenting the effects that migrants have on native wages, tax burdens, and unemployment, very little is understood about how migrants affect the happiness, or subjective well-being, of natives in the destination countries of immigrants. 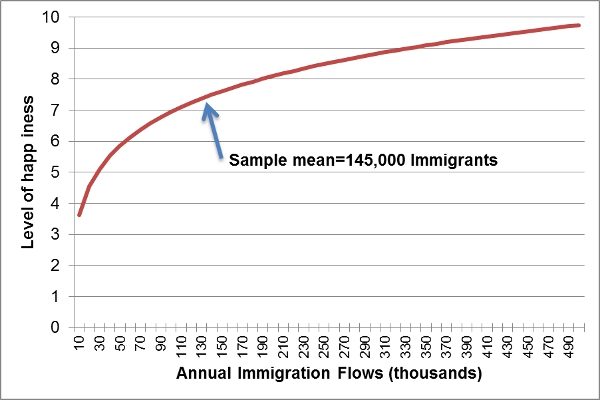 Importantly, we find that the impact of immigrants may differ over time for several reasons. First, more recent migrants may have had little or no time to settle and/or impact the native population of the country. Secondly, it is possible that this result is due to the inflexible European labour market.  That is, immigration flows from different years may have varying impacts on the local labour market due to rigidities and time constraints. This could be especially true if migrants mainly impact the local population through labor market interactions.

In our study, we analyzed the effects of aggregate immigrant flows on the subjective well-being of native-born populations in a panel containing over 140,000 observations from 26 European countries between 2002 and 2010. Combining individual level data from the first five rounds of the European Social Survey with immigration data from the OECD, we use econometric analysis to explore the potential effects of recent international migration on the self-reported well-being of a country’s natives.

Our findings are very small in magnitude, however, and in practical application, only large immigrant flows would result in a palpable positive effect on native well-being. Our results are robust to a multitude of model specifications, and we have included a large set of control variables, encompassing effects that differ across individuals, countries, and time.

To date, relatively little research has been conducted on the specific relationship between migration and happiness, with the exception of a recent IZA paper. This study analyzes the impact of immigration rates on the overall well-being of both German-born natives and immigrants in Germany (using German Socio-Economic Panel data), and finds that immigration provides a robust, positive effect on native well-being. Our findings are similar (in magnitude) to these results, but they extend more generally to include a larger set of European countries.

Our results, coupled with prior research on the impacts of immigration on natives, suggest that immigration may provide an overall welfare benefit, albeit a small one, for a country’s local population. Thus, one could infer that the costs of immigration, such as marginally negative wage and employment impacts for natives, could easily be balanced or even surpassed by the benefits of migration. These benefits could come through a variety of channels, including complementary factors of production, lower relative prices of goods and services produced by migrants, improved labor market efficiency, and economic growth resulting from higher demand for goods and services, job creation, and economies of scale.

However, research on how migrants affect the well-being of natives in destination countries remains scarce, and the exact channels through which immigration impacts the well-being of immigrants have not yet been pinpointed. Further research could examine the specific happiness impacts of immigrant groups of various human capital levels, demographic factors, and length of stay on native populations. In order to carry out future research, more detailed datasets combining disaggregated immigration statistics and happiness are needed.

(1)The estimates in Figure 1 assume that lagged immigrant flows are constant over time. That is, the inflow of immigrants into a country is the same one and two years prior.

This article is based on the IZA paper, The Effects of International Migration on the Well-Being of Native Populations in Europe.

Nicole B. Simpson – Colgate University, New York
Nicole B. Simpson is an Associate Professor of Economics at Colgate University in Hamilton, New York. She obtained her PhD in Economics from the University of Iowa in 2001. Nicole considers herself to be a macroeconomist who focuses on labor issues. Her research areas include immigration, the Earned Income Tax Credit (EITC), education and growth. She joined IZA as a Research Fellow in February 2012.