A lack of access to safe abortions is a major cause of maternal mortality across the world. Looking at Islamic sources and relevant literature, Gilla Shapiro investigates the Islamic discourse and the diversity of laws across Muslim-majority countries. She finds that the remarkable variability is largely dependent on the point of gestational development and the grounds for abortion. For more permissive abortion laws to be achieved in Muslim-majority countries, she recommends that the more lenient interpretations should be highlighted, using a country-specific approach that takes into account local social and cultural factors.

Though an induced abortion is one of the simplest and safest medical procedures known today, many abortions that take place worldwide are unsafe. The result of an unsafe abortion can be maternal mortality; WHO (2011) reports that unsafe abortions directly results in death for 47,000 women every year. Furthermore, many more women who survive an unsafe procedure experience complications and are left temporarily or permanently disabled (e.g. by sepsis, infection, haemorrhage, and trauma).

In order to prevent unsafe abortions, it is important for the right to abortion to be enshrined in law. Maternal death from unsafe abortions is practically unknown in countries where abortions are available on the broadest possible ground. For example, one 2005 study found that in South Africa, the incidence of infection resulting from abortion decreased by 52% after South Africa’s abortion law was liberalized. Similarly, the Department for International Development (DFID) (2005) found that in Romania there was a rise in maternal mortality ratios when restrictive abortion laws were passed in 1966; however, after the repeal of these laws in 1989 the maternal mortality ratio fell. These findings present a compelling public health argument for enshrining the right to abortion into law and liberalizing abortion law on the broadest possible grounds.

Though many Muslim countries are currently under significant pressure to liberalize their abortion policy, there is a research gap in explaining how such a policy, which would have to consider an Islamic perspective, may be sensitively and successfully achieved. In a recent paper I have described in some detail the relevant biblical sources (i.e. the Quran and Sunnah) and further relevant literature including contemporary fatwas and jurisprudence, mystical texts, broader principles, interest groups, and transnational commitments.

Understanding the Islamic perspective on abortion

Investigating Islam’s position on abortion reveals that though Islamic sources do not encourage abortion, there is no direct prohibition on abortion in the Quran and Sunnah, the two most authoritative biblical sources. Instead of specifically discussing a pregnant woman seeking a termination of a pregnancy before birth, the Quran focuses on unwanted (live) children and infanticide. Moreover, a central passage in the Quran explains the four stages in the development from a foetus to a child. This passage, which has led to a stage-dependent perspective, is extremely important in understanding Islamic rulings on abortion at different gestational periods. Figure 1 exemplifies the substantial diversity of laws across the four Sunni legal schools. For example, the Hanafites, who comprised the majority of orthodox Muslims in later centuries, permit an abortion until the end of the fourth month of pregnancy. On the other hand, most Malikites prohibit abortion absolutely. Despite their differences, all schools concur that after 120 days (i.e. ‘ensoulment’) the foetus is considered a child and abortion is prohibited.

Despite the possibility for lenient interpretation of the Quran, fatwas (i.e. Islamic legal rulings) on the whole do not support abortion and most muftis (i.e. authoritative persons who render legal opinion) prohibit abortion out of a fear of an ethical ‘mudslide’. Nevertheless, some fatwas have exhibited leniency, particularly when the life or health of a pregnant woman is threatened or if the foetus is expected to be deformed. In addition, other interrelated Islamic principles in both classical and modern ethical reasoning—including the centrality of utility (or public interest, istislah) and equity (or a just solution, istihsan)—have been used to support abortion rights.

Positions on abortion are variable and whether abortion is permitted depends on the particular circumstances and stage of gestational development. Islam has been interpreted to be compatible with abortion rights in prescribed situations. Particularly, the least blameworthy abortion is that of ‘necessity’ (i.e. if the life of the pregnant woman is threatened) and when 120 days have not lapsed.

Note: This table discusses Sunni Islam. Each Sunni school interprets the Hadith (i.e. recorded oral traditions of Muhammad) somewhat differently. A Sunni Muslim may choose to follow any one of these equally orthodox schools. Notably, Shiites reject the four Sunni schools. Most of contemporary Shiite jurists do not allow abortion without any reason at any time; however, they do allow abortion especially before 4 months on grounds of foetal or maternal conditions that may bring extreme difficulties for the mother or family. 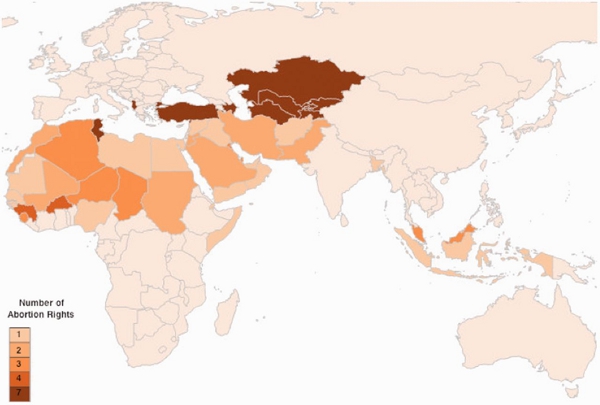 Based on the analysis of the Islamic discourse and current practices of countries, I have made policy recommendations for liberalizing abortion rights in Muslim-majority countries. Particularly, more lenient abortion laws may be achieved through disabusing individuals of the incorrect assumption that the Quran and Sunnah unambiguously oppose abortion, highlighting more lenient interpretations that exist in certain legal schools, emphasizing significant actors that support abortion, and being mindful of policy frames that will not be well-received. In so doing, the heterogeneity of Muslim-majority countries should be taken into account and the implementation of these strategies should be country-specific. In addition, other social and cultural strategies should be explored in order to reduce the stigma associated with abortion and improve access to abortion.

Gilla Shapiro – St. Michael’s Hospital, Toronto
Gilla has interests in psychology as well as health and gender policy. Gilla began her studies at Girton College, University of Cambridge, where she earned her B.A. and M.A. (Cantab) in Social Psychology. To further develop her interest in public policy, Gilla completed the MPA/MPP dual degree program at the London School of Economics and Political Science and the Hertie School of Governance. Gilla is currently working as a Research Coordinator at St. Michael’s Hospital (Toronto, Canada).

The health sector in Greece has been severely affected by the economic crisis, raising concerns for the future of the Greek health system.

The L’Aquila earthquake case is not “science on trial”. It is a challenge to the way public officials communicate risk.

As Europe’s fiscal union marches on, it is time for the centre-left to debate what it can do to make the eurozone more progressive