The early 21st century can be defined by the depth of globalization and connections across continents. This level of integration also brings with it global problems, such as terrorism and the international financial crisis. The European Union in the G8: Promoting Consensus and Concerted Actions for Global Public Goods examines the relationship between two of the most important players in global governance by looking at its key actors and the intricacies of multilevel governance. Thomas Ramopoulos finds that the book makes some bold statements concerning the effects of the emerging vulnerabilities of the EU and G8, and it is a valuable contribution to the developing literature on the EU’s function in global governance. 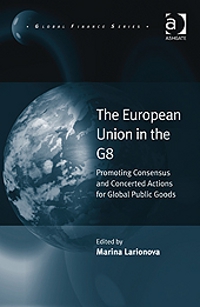 The European Union in the G8: Promoting Consensus and Concerted Actions for Global Public Goods, edited by Marina Larionova, is a product of a fruitful cooperation among leading international scholars in the field of global governance. Another book belonging to the Global Finance Series by Ashgate, this edited volume goes well beyond the examination of the governance of international finance. Rather, having digested the reality of ‘inter-vulnerability’ of international actors as well as the significance of the EU in global governance and the provision of global public goods, the authors embark on an exploration of the inadequately examined relationship between the EU and the G8.

The topic of this book could not have been timelier. Indeed, the 2008 international financial crisis and the subsequent euro area sovereign debt and banking crisis, the Fukushima nuclear accident in Japan in 2011 with its environmental and human health fallout, the continued threat of international terrorism, piracy, the spread of communicable diseases across continents as well as the recent crisis on the Korean peninsula threatening international peace and security, are some glaring examples illustrating the inter-connectedness of the globe and the need for a framework of international cooperation in order to provide global public goods. The G8 and G20 constitute a global governance framework within which the most advanced regional organisation, the EU, acts and co-determines developments.

One of the strengths of the book lies in its clear and methodological structure. Part II (Chapters 2-3) provides the reader with the analytical framework which informs, at least implicitly, the subsequent analysis whereas it functions as a compass both for the expert and the student in navigating through the book. Part III (Chapters 4-8) examines the key actors in the EU-G8/G20 relationship. The editor of this book thereby avoids the often mounted criticism to such intellectual efforts that they turn a blind eye either to political realities on the international plane or to the intricacies of the multilevel EU governance affecting the EU’s policymaking in the G8 and G20. This is complemented by a significant empirical component in Part IV. Still, some of the case studies are rather condensed and could have gained from some further analysis.

Revisiting some of the chapters of the book, John Kirton discusses in a rich Chapter 3 the key analytical concepts describing the EU-G8 relationship, drawing upon international relations theory. When analysing the concepts of ‘vulnerability and shocks’ he makes some bold statements deserving further scrutiny here. He suggests that:

the increase in […] new vulnerabilities is moving the EU and the G8 from being institutions-as-forums dominated by competition based on relative capability among their autonomous members with distinct preferences, interests, and values towards being clubs or even communities with a common responsibility to provide global public goods to prevent damage and even extinction to themselves and those outside. […] In both the EU and the G8, this creation of community and consolidation is a one-way ratchet-like street with virtually no retreats, even if there are many detours, delays, and gridlocks, which might last for a long time, along the route.” (p. 33-34)

Kirton is perhaps too quick to make a parallel reference to the internal processes in the EU and the G8 with regard to the creation of a mentality of ‘group’ or ‘community’ among their members. First, the EU being a qualitatively different creature than the G8, it has attempted with considerable success to overcome ‘distinct preferences, interests, and values’ well before the latest ‘new vulnerabilities.’ Besides, the verdict is still out on whether the 2008 global financial crisis and the euro area sovereign debt and, lately, banking crisis have actually triggered competition between the North and the South of the EU cracking the outer surface of European solidarity and increasing centrifugal forces. Therefore, the certainty of the author, bordering on determinism and taking rationality in international politics as a given, that the ‘new vulnerabilities’ requiring a global response, will lead to the further consolidation of the EU and the G8, is questionable.

The comments on European solidarity and the irreversibility of the EU and G8 projects are relevant for the analysis of Chapter 6 on the EU as a leading international player. Here Mark Entin gives a thorough account of the features of the EU that explain its role in global governance. Among others he accurately refers to the political culture of solidarity within the Union as an enabling factor for the success of this political project. However, he observes that this has ‘seriously degraded’ (p. 92) primarily due to the more ‘individualist’ political culture of the new EU Member States. Still, it would have been helpful to elaborate further on this through more detailed examples. In addition, the euro area crisis teaches keen observers of the European project that the political culture of solidarity may at times prove unable to overcome short-term national interest considerations of some of the old EU Member States too. A relevant question for further research could be therefore whether this can affect the role of the Union in global governance.

The book’s final chapter (by Marina Larionova and Mark Rakhmangulov) is grounded in an impressive number of EU and G8 documents from the period between 1998 and 2008. The authors conclude that ‘the EU’s contribution to global governance is growing […] significantly contribut[ing] to the consolidation and transformation of a shared system of values.’ (p. 266) However, the data used do not reflect developments since the latest crises, which would have had a possible effect on the conclusions drawn. This is, though, an unavoidable shortcoming of all types of research that focuses on contemporary developments.

This book is a valuable contribution to the still developing literature on the EU and its function in global governance, and is useful for experts and students alike. It answers questions and interprets past and current developments, and allows for the conduct of a debate on the future direction of global governance and the position of the EU in it.