The Czech Republic has traditionally been assumed to be more Eurosceptic than other countries in Central and Eastern Europe, particularly during the period in which Václav Klaus was the country’s president. Seán Hanley previews the upcoming European Parliament elections and the potential electoral fortunes of Czech Eurosceptic parties. He writes that while public opinion has hardened toward the EU, particularly in terms of support for joining the euro, the pragmatic approach of Andrej Babiš’s ANO movement is likely to receive the largest backing from the Czech electorate.

As elsewhere, the elections to the European Parliament in the Czech Republic on 23-24 May will be more of a trial of domestic political strength, than a contest over EU issues. The EP elections come at a time when Czech politics is still in flux following the ‘political earthquake’ unleashed by national parliamentary elections in October 2013. These saw the eclipse of established right-wing parties; sharp electoral setbacks for the Social Democrats (ČSSD), the main party of the Czech left; and a dramatic breakthrough by the new ANO movement of billionaire Andrej Babiš. The question in the minds of many observers is whether the Euro-elections – the first national poll in a year that will also see crucial Senate and local elections – will confirm this changed political landscape

Early indications are that they will. Projections by Pollwatch 2014 (based largely on general polling data) suggest that ANO and ČSSD, who have governed together in an uneasy centrist coalition since January, will top the polls each with a projected 22 per cent of the vote, enabling each to elect 6MEPs. Polling by SANEP, which asked specifically about the European elections, broadly echoes this, but gives ANO a clear lead. 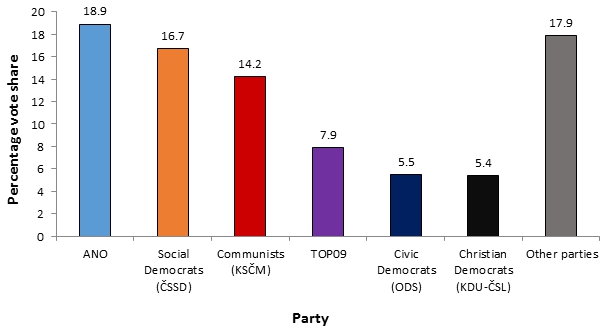 This is good news for Babiš’s movement, whose strategy of presenting itself as a non-ideological reform movement and hand-picking high profile technocrats and businesspeople as candidates seems, for the moment, still to be paying off. The movement’s EP list is headed by the ultra-credible Pavel Telička, a vastly experienced former diplomat who headed the Czech Republic’s EU accession negotiating team in 1998-2002 and briefly served as a European Commissioner.

ANO is one of the few Czech parties to have published a detailed programme for the European elections. The movement is broadly pro-integration and pro-business, stressing the need to use the EU pragmatically in the Czech national interest, primarily as a vehicle for economic growth. Its MEPs are likely to find a home in the small, diverse (and increasingly divided) liberal ALDE group in the European Parliament. ALDE leader Guy Verhofstadt recently met Andrej Babiš in Prague and was at pains to refute any suggestion that the ANO leader was a post-communist oligarch or a ‘Czech Berlusconi’. The movement’s raw pragmatism may, however, lead to difficulties with both domestic and European partners. As finance minister Andrej Babiš had to quickly backtrack on remarks against opposing any accelerated timetable for euro adoption.

The Social Democrats can draw limited comfort from the polls. A drop from 7 to 6 MEPs would be a relatively minor setback for the party, given the scaling back of overall Czech representation from 22 to 21 MEPs.It would be sufficient to retain a safe berth in the European Socialists and Democrats group and (on current polling) to match ANO. However, ČSSD may be vulnerable to a surge by ANO. The party chose a somewhat unlikely newcomer – the sociologist and ecological activist Jan Keller – as its lead candidate and has otherwise waged a predictable campaign stressing its pro-European and pro-social credentials.

Two small pro-European parties of the centre-right, the Christian Democrats (KDU-ČSL) and TOP09 each appear set to gain two MEPs. Although on opposite sides of the domestic political divide – KDU-ČSL is a junior partner in the current coalition, TOP09 in opposition – both will sit with the European People’s Party in the EP.

On current forecasts May’s elections seem likely to prove disappointing for traditionally Eurosceptic parties on both the left and right. As in 2009, the hard-line Communists (KSČM) are likely to finish a strong third in the European elections with 15-16 per cent support and to retain their current four MEPs. KSČM opposition to the EU has mellowed over the years, but the party is still critical of the Union’s democratic deficit, stress on deregulation and competition and close alignment with the US in foreign policy.

The party’s European campaign, however, has been undermined by accusations of financial impropriety and false expenses claims against its long-serving senior MEP Miroslav Ransdorf, who has been shunted from first to fourth place on the party’s electoral list. Communist MEPs will continue to sit with the European United Left/Nordic Green Left group, of which Ransdorf was deputy chair. However, the KSČM may find its influence in GUE-NGL diminished both because of the reputational damage sustained by Ransdorf and an influx of radical left MEPs from Southern Europe.

While the Communists are stagnating, the right-wing Civic Democrats (ODS), a close ally of the British Tories in the European Conservatives and Reformers (ECR) group, are bracing themselves for heavy losses. Traditionally one of the pillars of the Czech political system, ODS was humiliatingly cut down to minor party status in the October 2013 parliamentary elections after the government it led collapsed in political scandal. The party’s new leader – the former education minister and professor of political science Petr Fiala – seems to have stemmed the party’s reputation for engrained corruption and rallied its core support.

However, ODS seems set to lose the bulk of its nine MEPs. Projections suggest the party will struggle to win two seats in the European Parliament and it is even possible that the serving ODS leader in the EP, Jan Zahradil, may find himself the party’s lone representative. Either scenario would leave the ECR, if it re-forms, a potentially awkward tandem between the market-oriented British Tories and the Catholic conservatives of the Polish Law and Justice Party (PiS).

Although chastened by defeat, the Civic Democrats have lost none of their trademark Euroscepticism: while not advocating withdrawal from the EU – now the position of ODS founder and the former president Václav Klaus – the party is demanding a referendum on adoption of the euro and, if possible, negotiation of a Czech opt-out from the single currency.

One new Eurosceptic challenger is the populist Dawn of Direct Democracy grouping which won seats in the Czech parliament last year. Dawn takes a highly critical stance towards the EU, which it sees as manipulated in favour of larger states and threatening to Czech economic interests. However, the group’s Euro-elections challenge has been blunted by the decision of the movement’s founder Tomio Okamura to make the lawyer and former Roma rights advocate Klára Samková the movement’s lead candidate. Samková’s erratic, but previously liberal politics sit uncomfortably with Okamura’s well documented demands for the Roma to emigrate to India and her candidacy for Dawn has been widely seen as opportunistic and eccentric.

More ideologically Eurosceptic groupings, such as the Party of Free Citizens (SSO) and Czech Sovereignty (ČS), seem unlikely to make a political impact, given a lack of resources and the political disarray caused by Václav Klaus’s decision last year not to lead a new conservative Eurosceptic alliance.

The so-far indifferent performance of the Czech Republic’s well-established Eurosceptic parties is at first glance surprising. In recent years Czech public opinion has become markedly more sceptical towards European integration. As Chart 2 shows, support for joining the euro has collapsed, while trust in the EU is at a historic low. 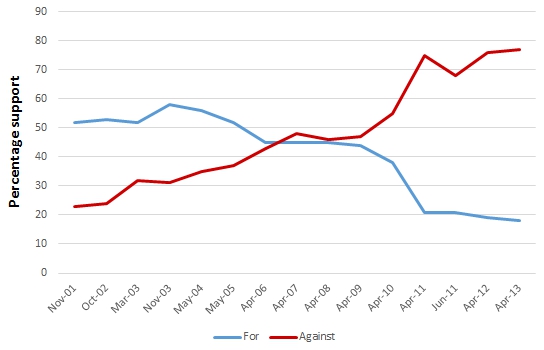 Czech voters are also markedly more disillusioned with the experience of EU membership than electorates in some other new member states. In neighbouring Slovakia, for example, according to polling commissioned by Czech TV, a clear majority of those polled see EU membership as having had a positive effect, while in the Czech Republic the majority saw the Union’s impact as either negligible or negative.

The paradox is explained partly by the EU’s lack of salience and the Czech public’s ignorance of – and disengagement from – European institutions and elections. SANEP polling suggests that, as in 2009, some two thirds of the Czech electorate will simply not bother to vote. However, it also reflects a mismatch between supply and demand for Eurosceptic policies. Wealthier, better educated voters on the political right have always tended to be pro-European and at odds with the conservative free market Euroscepticism offered by the Civic Democrats – backing the party in its heyday despite not because of its ‘eurorealist’ stance. Czech Eurosceptic voters tend to be older, poorer and more left-wing, but do not now – perhaps even in the Communist Party – find a force on the left giving full voice to their frustration and disillusionment with European integration.

Many voters, whatever their levels of Euro-enthusiasm or -disgruntlement, may recognise that there are few realistic options for a small Central European country like the Czech Republic other than to go with the flow of EU integration and seek from time to time to make a well-placed touch on the tiller.

It is precisely such resigned but hard-nosed realism that seems to animate the pragmatic new Euro-politics of ANO. It may well deliver Andrej Babiš’s movement a further round of electoral success.

Note: This article gives the views of the author, and not the position of EUROPP – European Politics and Policy, nor of the London School of Economics. Feature image credit: Vlasta Juricek (CC-BY-SA-3.0)