One of the key technological developments in the past two decades has been the spread in the use of mobile phones. How do such changes in technology affect issues such as social justice and inequality? Sakari Taipale and Leopoldina Fortunati write that while the creation of new mobile phone technologies has tended to be seen as a uniquely positive development, closer analysis of mobile phone usage reveals that many of the new features of modern smart phones remain unused by a majority of users. Moreover there is a clear split in terms of social groups who have embraced the new technologies, and those who remain wedded to older features, suggesting that more needs to be done to ensure all European citizens are in a position to take full advantage of new technology.

The rapid advancements in mobile phone technology and applications have created high expectations among researchers and policy makers. From a technical point of view, the smart phone appears to enable almost everything from mobile parenting to mobile banking and from routine text messaging to the far-reaching quantification of the self, including measuring physical performance, states of mind and body, and nutritional intakes. These technical capabilities of cutting-edge mobile phones have powerfully contributed to a skewed understanding of digital omnipotence. However, this ‘smart’ technology does not automatically translate into smart usage. Hence, even in affluent European countries, such as the UK, these high expectations with regard to the mobile phone are unlikely to be met in the foreseeable future.

To understand the social meaning of mobile communication technologies in contemporary societies it is necessary to put to one side technical capabilities and advancements. Instead, we have to investigate mobile technologies in practice and put their actual uses in a larger perspective. By doing so, some ‘inconvenient truths’ about mobile phones begin to become apparent. In 2009, only about one third of mobile phones features were exploited in France, Germany, Italy, Spain and the UK (the five largest EU countries). The same study also shows that it was no more than four specific features – text message, clock, alarm clock and using a camera to take a picture – which were used by more than half of mobile phone users in these five countries. The Chart below shows these figures.

Chart: Percentage of mobile phone users who use specific features in France, Germany, Italy, Spain and the UK 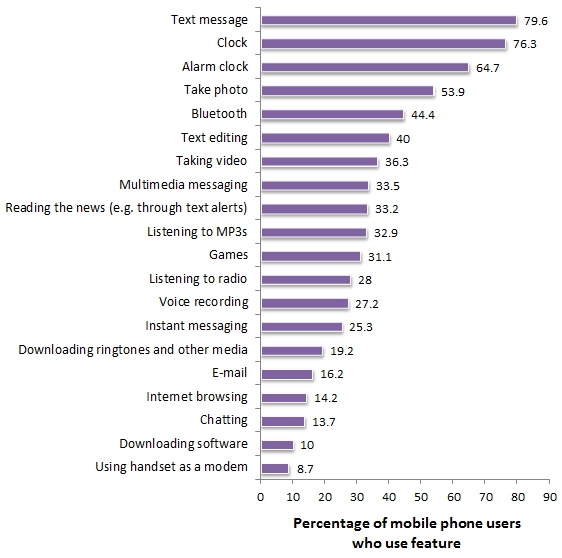 Compared with the other four countries, the UK succeeds relatively well as regards the advanced use of mobile phones. In fact, British mobile phone users, together with those in France, can be viewed as the most advanced of this group. These two nations are followed by Germany, Spain and Italy, respectively. British users in particular have continued to adopt the newer properties along with the rapid development of mobile phone technology and applications. On the contrary, Italians, who were among the early mobile phone adopters and have been among the most intensive mobile users, have stuck to using less developed mobile phone features.

Despite high mobile phone penetration rates in Europe, the extensive utilisation of the advanced features of these multi-functional appliances is concentrated among a few, which still gives reason to speak of advanced users, just like we talked of mobile phone pioneers in the 1990s. However, these users are by no means consistent across European countries. For example, in the UK and France it consists mainly of people living in families without children. This is noteworthy since children have long been considered as a driving force behind the diffusion of new personal technologies. Now it appears that families with children have begun to lose their relative power, while families without children have relatively more resources, in terms of time and money, available for keeping up with new technological advancements. In Germany, this group is more concentrated in big cities than in the other four countries.

Findings from other EU member states, like Finland, match these observations, and suggest that the figures are indicative of new social stratifications in the digital era. In Finland, mobile communication technologies, together with a more intense use of various transportation means, concentrate in the hands of a group who are typically urban dwellers, men, and students with relatively small incomes.

Besides these advanced mobile phone users and the mobile-rich, there is a sizable group of “weak social subjects” that deserve more attention from both scholars and policy makers. This group has difficulties or poses resistance to the use of mobile phones in a skilled and versatile manner. In the UK, like in Italy and Spain, this group includes especially housewives and househusbands. In Italy the groups also incorporate unemployed people, and in Spain pensioners. These people live and work typically in the domestic sphere, have limited economic resources and relatively low education.

What does mobile phone use mean for social stratifications and inequalities across Europe?

Socially differentiated uses of new communication technologies clearly challenge the classical determinants of social stratifications, such as labour market position and income. The new technological vanguard is typically disconnected from the directed and centrally organised labour process in the industrial sector. While in the industrial era such groups were usually comprised of relatively low educated people and adults, this new group includes both material labour (e.g. technicians) and immaterial labour (e.g. students), and is largely made up of the well-educated youth. The mobile-rich in Finland even have a relatively small income.

It is widely agreed that social sustainability in Europe is directly linked to the experienced levels of social justice. New technologies, including mobile phones, have a place in this difficult puzzle. As it is evident that societies are increasingly stratified also on the basis of the uses of modern communication technologies, it is of great importance to put European citizens in a position to take full advantage of these technologies. The success of societies, such as the five largest EU countries, is largely dependent on how these new mobile communication features can benefit not only the groups who have quickly adopted new technologies, but the masses, without trampling upon their social and political rights.

Note: This article gives the views of the authors, and not the position of EUROPP – European Politics and Policy, nor of the London School of Economics. Feature image credit: Banksy

Sakari Taipale – University of Jyväskylä, Finland
Sakari Taipale holds a PHD in Social and Public Policy, and works as an Academy of Finland Research Fellow in the Department of Social Science and Philosophy. He is also an Adjunct Professor of the University of Eastern Finland. He is currently leading a five-year research project on intergenerational relations in broadband societies. He publishes actively on social (in)equalities related to the use of mobile media technologies and mobilities. Taipale tweets from @saktaipa

Leopoldina Fortunati – University of Udine, Italy
Leopoldina Fortunati is the head of the doctoral program in Multimedia Communication at the University of Udine, where she teaches Sociology of Communication and Culture. She has conducted several quantitative and qualitative research projects in the field of gender studies, cultural processes and communication and information technologies, and her works have been published in twelve languages. She is the co-chair, with Professor Richard Ling, of the International Association “The Society for the Social Study of Mobile Communication” (SSSMC).