A number of civil society organisations (CSOs) have offices in Brussels aimed at influencing EU decision-making, however the fact that many of these organisations also receive EU funding has raised questions about their independence. Rosa Sanchez Salgado investigates the funding records of Brussels based CSOs, noting that although a majority receive EU funds, the largest proportion of funding is still derived from private contributions. She argues that EU funding for CSOs also plays a vital role in promoting underrepresented groups and that without it business interests and large organisations would have an even greater advantage in terms of their ability to put their views across to policymakers.

Thousands of lobbyists have set up shop in Brussels. European legislation attracts a great variety of interest groups, but most lobbying battles involve business and civil society organisations (CSOs). Brussels based CSOs promote human rights, as well as high environmental, social and democratic standards in EU policy-making and implementation. Business lobbies usually aim for ‘reconciliation’ between such public values and economic growth. CSOs are now well-established, but their reputation is consistently being challenged by observers and commentators.

Although CSOs should advance universal values and manifest citizens’ will, it is generally considered that most Brussels-based CSOs are highly dependent on EU funding, and for this reason, they are pictured as friends of the EU or even as ‘government puppets’. EU funding of CSOs is often assumed to create a vicious ‘circle of convenience’ in which the European Commission only sponsors Brussels CSOs to increase its powers and expand its responsibilities, while CSOs are anticipated to flatter the Commission to secure their sources of income. According to this line of argumentation, the Commission and CSOs would be promoting their narrow interests to the detriment of the democratic process.

This conception appears to be based on received wisdom rather than on verified accounts or explanations. EU funding, as any kind of public funding, can certainly lead to resource dependency for a few CSOs. As the African proverb goes, ‘if you have your hand in another man’s pocket, you must move when he moves’. Public funds dependency is a real problem that needs to be addressed, but the dependency argument is readily exaggerated.

In a recent study I argue that public funding is not necessarily harmful for CSOs. In fact, the effects of public funding on CSOs are varied. They mainly depend on the funding conditions and rules and on the way in which public officials and CSOs interact within the framework of these arrangements. To illustrate this point, I offer an analysis of EU CSO funding and show that EU funds are far less important than one might assume. EU funding is actually correcting certain imbalances in the EU system of interest representation, and is also promoting democratic features among CSOs, encouraging associative democracy.

Even if the EU strongly supports many CSOs, European funds are far from dominant in the European advocacy landscape. As Chart 1 shows, even if most CSOs studied actually get EU money (61 out of 87 organisations) the majority of their funds come from private contributions – that is, members contributions and member fees. There are also many Brussels CSOs that do not get any kind of EU funds. 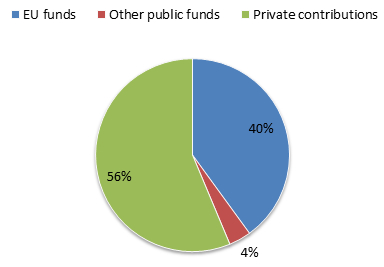 As shown in Chart 2, EU funding supports CSOs standing for excluded groups or groups facing discrimination such as women, migrants and sexual minorities. Without EU support, these groups would simply not be represented at the EU level, and thus, European public policy would actually be more biased toward powerful interests that it is now. In sharp contrast, most CSOs relying exclusively on private contributions are composed of professionals, or are somewhat related to the State or the Church. Only a few large international CSOs, such as Amnesty International or Greenpeace, are mainly supported by member contributions, obtained via sophisticated public marketing techniques.

Chart 2: Total funding (euros) for the ten social civil society organisations receiving the most funds from the EU 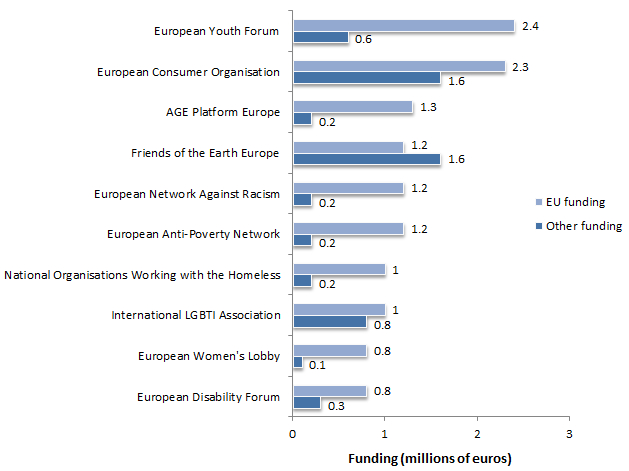 Hence, the EU is giving voice to certain excluded groups and addressing important imbalances in the European advocacy landscape, but this function may not necessarily be unbiased. The EU only supports CSOs engaging in advocacy activities within the limits of the competences conferred by the treaties. This restriction, however, is not very surprising. If the EU funded groups of Eurosceptics or those seeking to reverse the integration process, it would go against the preamble of the treaties, where member states say that they are determined to lay the foundations of ‘an ever-closer Union’.

The Commission, in charge of the distribution of funds, can plausibly distort the system in a way that fits its own bureaucratic interests. To address this non-negligible risk, the EU should establish procedures to place bureaucratic policy choices under public scrutiny, such as regular consultation processes or external evaluations.

The EU does not give money to CSOs blindly. EU funding includes a series of requirements ensuring that CSOs respect some basic democratic features, such as autonomy and representativeness. For example, CSOs must prove that they have a formal system of representation. In some cases, the EU seems to be promoting such democratic features among CSOs. Apart from formal representativeness, the EU also requires geographical coverage. EU-funded CSOs tend to be all-inclusive and represent a wide range of EU countries, while CSOs relying on other sources of income tend to cover far smaller geographies and countries.

Up to this point, however, the promotion of CSOs’ autonomy has not been very successful. The rebalancing of the Brussels advocacy landscape may be desirable, but many EU-funded CSOs are still highly dependent on EU funds. A few CSOs are funded up to 80 per cent by the EU. Whether this funding dependency leads to a loss of autonomy is still open to question.

It is difficult to say that fund dependency is always unproblematic, but EU funded CSOs are often very critical of EU policies, and sometimes even aggressive. For example, the Platform of European Social CSOs uses slogans such as ‘Mr Barroso, you killed the European dream!’ Certain CSOs strongly supported by EU funds have also engaged in offensive advocacy strategies such as litigation or demonstrations. All in all, the potential loss of autonomy of CSOs does not necessarily require the removal of EU funds as suggested by many commentators, but it is still important to improve the existing funding rules and conditions.

EU funding has often been heavily criticised, but the evidence presented here suggests that the EU helps sustain, but does not significantly constrain, the development of European CSOs. Likewise, even if CSOs have been empowered, they are not necessarily influential, since their input is often discarded without explanation. If EU funds did not support weakly articulated and fragmented interests, the predominance of business interests and large organisations at the EU level would be even more overwhelming.

Rosa Sanchez Salgado –University of Amsterdam
Rosa Sanchez Salgado is an Assistant Professor of European Public Policy at the University of Amsterdam. Her previous research has principally focused on efforts by EU institutions, above all the Commission, to shape civil society organisations. On this topic, she is author of Europeanizing Civil Society: How the EU Shapes Civil Society Organizations. 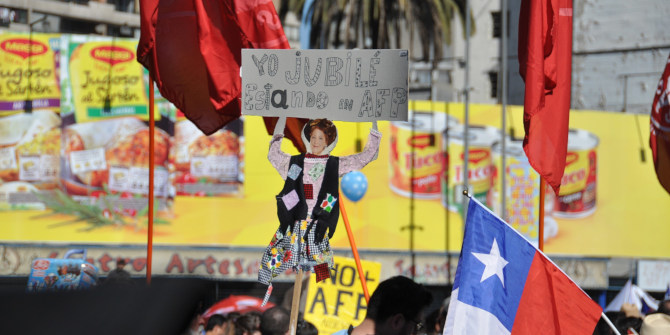