The Eurozone continues to experience low growth, while unemployment remains a substantial problem in several European states. Alison Johnston and Aidan Regan write that despite these issues, the European policy response has remained broadly similar since the crisis: reducing public spending and imposing structural reforms in periphery states to try and improve their competitiveness. They argue that there are far more fundamental problems in the Eurozone and that one potential way to solve these would be to encourage wage rises in northern economies such as Germany.

The Eurozone’s crisis never seems to end. Italy has re-entered recession. The French government is in turmoil over austerity. Youth unemployment is at a historic high in Spain. Increased taxes are crippling low-income earners in Ireland. Extreme poverty is growing in Greece. Wage stagnation continues in Germany. Yet the European policy response remains the same. Reduce public spending and impose structural reforms in the euro periphery and hope that cost competitiveness will kick start economic recovery. Any suggestion that countries are struggling to recover because they lack tools of adjustment or monetary sovereignty is politely ignored. Monetary union is not the problem.

We disagree. In a forthcoming Max Planck Institute for the Study of Societies discussion paper, we argue that the absence of national adjustment tools within a monetary union has significant implications for the co-existence of Europe’s diverse models of capitalism. While gaping external lending and trade imbalances between the Eurozone North and South are identified as an underlying instigator of the crisis, these regional imbalances were heavily contained prior to the launch of the single currency (see figure 1). We do not find this coincidental. The rise in external imbalances within the Eurozone can partially be attributed to how monetary union removed important adjustment mechanisms in the real exchange rate between highly coordinated, low inflation-prone export-led growth models, which congregate in EMU’s Northern economies, and uncoordinated, high inflation-prone domestic demand-led growth models, which congregate in EMU’s periphery. 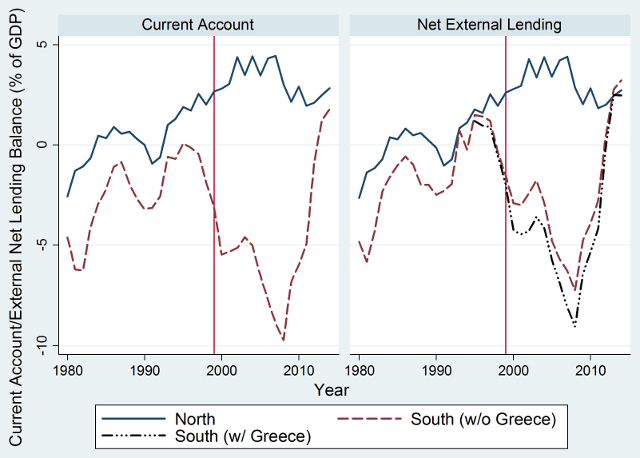 Europe’s Northern export-led models have always been successful in delivering wage moderation and low inflation relative to their Southern domestic demand-led trading partners. Yet prior to the late 1990s, these historical divergences in inflation did not produce significant external imbalances between these two growth regimes. This was due to the presence of important readjustment mechanisms between high and low inflation countries within the real exchange rate – the nominal exchange rate multiplied by the ratio of domestic to foreign inflation – under a monetary system of multiple currencies.

Contained external imbalances between domestic demand-led growth models also occurred in hard currency fixed-exchange rate systems where the nominal exchange rate was fixed between countries. In this type of currency arrangement, contained external imbalances were delivered via national central banks enforcing inflation convergence. Throughout the 1980s and 1990s, national central banks of EMU member-states committed themselves to a hard currency policy, either directly through an inflation target (Germany after the second World War, and all EMU member-states under the Maastricht criteria) or indirectly via the adoption of a (narrow band) fixed exchange rate with a low inflation anchor currency (Austria, Belgium, France and the Netherlands during the early years of the European Monetary System).

Monetary union removed these two adjustment mechanisms that facilitated the co-existence of Europe’s diverse models of capitalism. Unlike national central banks, the European Central Bank did not deliver inflation convergence between EMU’s member-states, because its inflation mandate applied to the Eurozone as a whole. Under the single currency, member-states’ real exchange rates vis-à-vis their Eurozone trading partners became purely a function of inflation. EMU’s new exchange rate calculus meant that the real exchange rate could slowly but persistently diverge between the EMU’s low inflation prone export-led and high inflation prone demand-led growth regimes. This was not necessarily due to the resurgence in wage inflation or structural rigidities in the labour market in southern Europe, where inflation was lower in the 2000’s than it was in the 1990’s. Rather it was due to wage deflation in the coordinated market economies of northern Europe, most notably in Germany.

All of this suggests that the problems of the monetary union are an internal relation between growth regimes with divergent inflation performances. As long as some member-states have domestic institutions that grant them a comparative advantage in producing low inflation, they will continue to realise a persistent real-exchange rate advantage over their high-inflation domestic demand-led counter parts in southern Europe. The creation of a banking or fiscal union is unlikely to compensate for the lack of adjustment mechanisms in the real exchange rate that underpin this external imbalance. Rather, adjustment must be delivered through the supranational management of inflation differentials between EMU’s member-states. In a perverted sense, Troika-induced austerity policy is partially accomplishing this by promoting deflationary adjustments in peripheral Europe through their devastating effects on incomes. However, this inflation adjustment has been entirely, and unfairly, one-sided.

As EMU’s domestic-demand led models pursue painful austerity measures, no attempt has been made to correct the excessive levels of wage moderation in the North in general and Germany in particular, which is a core factor in explaining the crisis. If Europe wants to end its crisis it requires a growth solution; the coordination of robust wage growth in its northern economies, in order to facilitate demand recovery in the south, may be one way it can accomplish this.

Note: This article gives the views of the authors, and not the position of EUROPP – European Politics and Policy, nor of the London School of Economics. Featured image credit: mammal (CC-BY-SA-3.0)