Italy’s constitutional referendum, scheduled for 4 December, has been billed as a vote of confidence in the country’s Prime Minister, Matteo Renzi. James Dennison and Jonas Bergan Draege illustrate, however, the more voters are invited to link the proposed reforms to Renzi, the less likely they are to support them. They suggest that with support for the reforms falling over recent months, the best strategy for a Yes vote may be to capitalise on distrust in political parties by reframing the referendum as a way to reduce the number of politicians in parliament.

On 4 December, Italian voters will go to the polls to decide on what would be the country’s most significant set of constitutional reforms since the birth of the Italian Republic in 1946. Indeed, the reforms would overhaul around a third of the constitution’s articles, ending the ‘perfect bicameralism’ in which both legislative houses have equal powers by significantly weakening the Senate, as well as reducing the latter’s membership from 315 to 100 and more clearly delineating power between Italy’s central and regional layers of government.

Alongside an already approved electoral reform that, amongst other things, allocates bonus seats to the largest single party, the net result of these reforms would be an empowered government free of the unique burden of maintaining the confidence of two chambers and probably less reliant on the support of Italy’s many minor parties for forming coalitions. Critics of the reforms have argued they will create an overly powerful executive, wrangling over legislative procedures, and a Senate packed full of regional representatives who should be concentrating on their day jobs.

Despite the radical nature of the proposals, Prime Minster Matteo Renzi had initially expected to pass his sweeping measures with two-thirds of both houses, enough to avoid needing approval by a referendum. However, after Berlusconi’s centre-right Forza Italia party – ironically, long-time supporters of constitutional reform – withdrew support in February 2015, Renzi could only obtain a simple majority of Senators. Despite the setback, Renzi remained confident that, when faced with an opportunity to finally have stable and effective government, the Italian electorate would vote in favour.

Early polls indicated overwhelming positivity among Italians toward the constitutional reforms, yet support for the changes has been on a downward trajectory ever since, as shown in Figure 1 below. 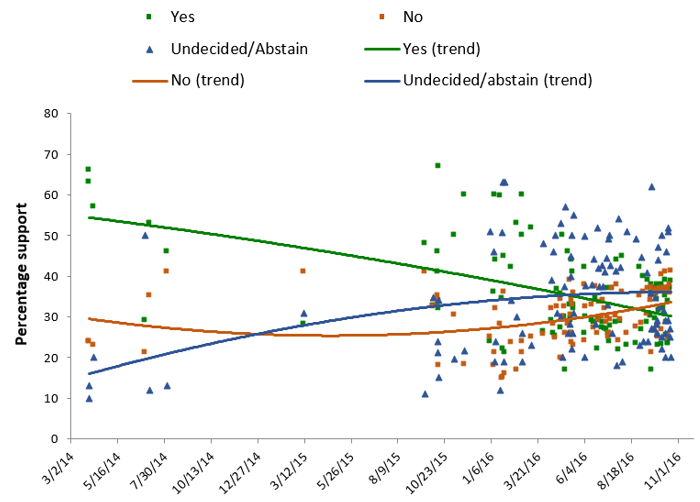 At least one factor explaining Sì’s decline is the falling popularity of Renzi himself, whose youthful confidence was initially welcomed by exasperated Italians. Though Renzi has taken pride in enacting reforms for future growth, his approval ratings have slipped from 70 per cent to 40 per cent in the face of a weak economic recovery and high youth unemployment, indicative of ‘economic voting’, whereby leaders are judged by economic factors.

As shown in Figure 2, the popularity of Renzi’s Partito Democratico (PD) and Sì fell in unison throughout 2015. In late 2015 Renzi attempted to bolster support by tying his political career to an affirmative referendum result. This strategy is now widely seen as a mistake. Since then PD support has remained stable while support for Sì has continued to plummet as all but Renzi’s admirers have been given reason to rethink their initial enthusiasm for the reforms.

In this sense, the referendum has become more a vote about the Prime Minister than the constitution. In response, Renzi’s government has attempted to shore up support for Sì by recently passing a budget bill that allows Italy to kick its fiscal obligations down the road and hand out rewards to key socio-economic groups prior to the vote, a risky strategy to which Italy’s fiscal authorities in Brussels and Frankfurt seem willing to turn a blind eye for now. 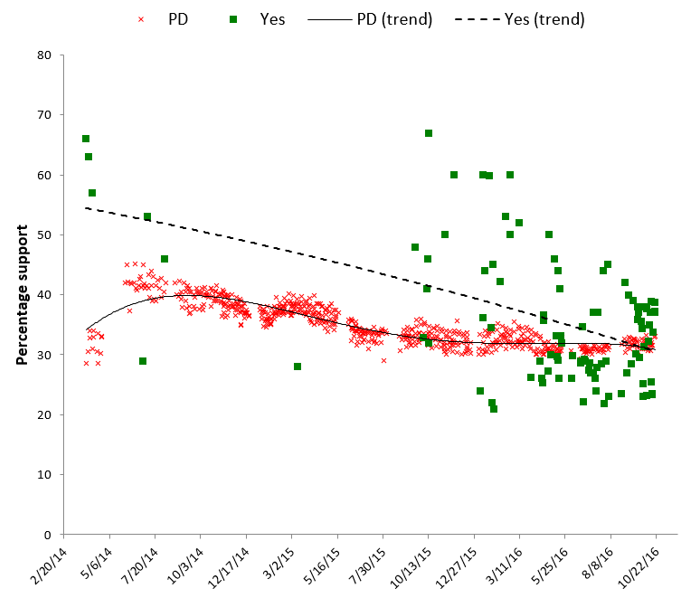 Partially in an attempt to emphasise Renzi’s ‘original sin’ of having come to power without election, his opponents have argued that the constitutional reforms would represent further disempowerment of the Italian electorate. Indeed, when Berlusconi, who himself pushed for constitutional reform as Prime Minister, announced his support for the No campaign, he stated ‘the victory of No will mark the beginning of a new political season in which Italians finally can decide again.’ Berlusconi originally agreed an informal pact with Renzi whereby the media mogul would support the Prime Minister’s reforms in exchange for a favourable presidential candidate, yet announced his opposition to the amendments after arguing that Renzi had reneged on his side of the bargain.

Beppe Grillo, whose populist Five Star Movement has risen in the polls from around 18 per cent in 2015 to parity with the PD at 30 per cent today, is more emphatically opposed, stating in late August that ‘today No is the most beautiful and glorious form of politics. Whoever does not understand that can f**k off’. He later tweeted ‘the referendum is an incomprehensible mess. Let your gut feeling decide.’ Ironically, one of the arguments put forward by No is that the reforms would offer few checks and balances should a populist figure like Grillo come to power.

The Lega Nord, who appeared to be fading out of the party system following a 2012 corruption scandal and whose traditional focus has been Northern regionalism, have also experienced a considerable increase in support since 2014 having switched their focus toward Euroscepticism and opposition to (particularly Islamic) immigration. The party’s leader, Matteo Salvini, has framed the referendum as Italy’s ‘Brexit moment’, tweeting ‘Thank you Great Britain, next it is our turn’.

How the referendum differs from Brexit

Though commentators have been as keen as Salvini to frame the Italian referendum and Britain’s EU referendum as equivalent expressions of anti-establishment sentiment, there are major differences. First, British attitudes to the EU had been stable for some years and the effects of that campaign, despite claims of its nefariousness, are likely to have been limited. By contrast, attitudes to Renzi’s reforms have varied greatly, both declining in approval across time as well as fluctuating wildly between contemporaneous polls. 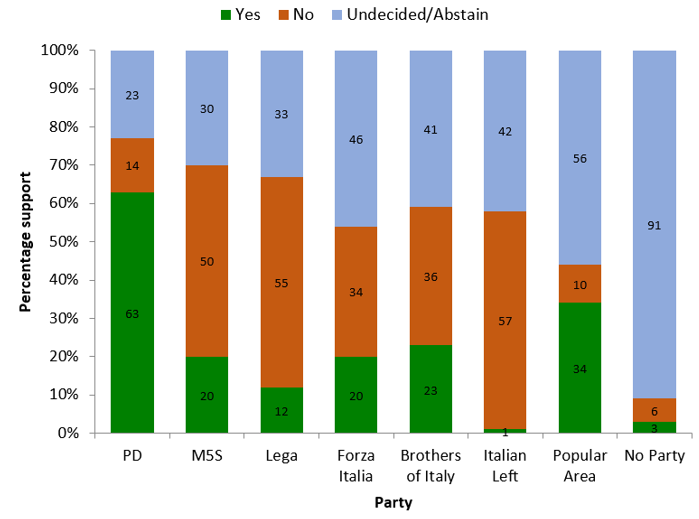 Underpinning these opposite dynamics are the contrary drivers of vote choice in each referendum. Whereas socio-demographics and long-standing beliefs concerning sovereignty and immigration were the foundations of British voting patterns – making them highly stable and resistant to campaigning – Italian attitudes toward the relatively non-ideological reforms proposed have been driven more by ‘party cues’ in a particularly unstable party system. As we can see in Figure 3, referendum vote intention is divided sharply by party choice. Moreover, planned abstention or remaining undecided is considerably lower among those with a party preference than the nearly one half of the Italian electorate currently without one.

Voter confusion: what you sì is not what you get

The relative ambivalence of Forza supporters, who have seen their leader flip-flop over the issue in the last two years, mirrors the uncertainty felt by much of the electorate and exemplifies the tendency of voters to drop out of political participation when faced by “cross-pressures” – multiple beliefs, incentives or partisan allegiances that have opposing causal effects on their vote choice.

On one side is a centre-left Prime Minister who is in coalition with two minor centre-right parties proposing a historically right-wing initiative with the backing of business groups. On the other is an even stranger set of bedfellows, including the ambiguous populists in the M5S, the radical right Lega Nord, the far right Fratelli d’Italia, the wavering Forza Italia, and the Greens and communist parties. Furthermore, Renzi has experienced considerable opposition from left-wing sections of his own party, who have been more vocal than the faded Berlusconi, as well as from trade unions, both of which resent the PD’s recent rightward shift.

The broad package of reforms makes the referendum both technically complex and liable to include a mix of proposals that voters are both in favour of and are opposed to. Indeed, a recent poll showed that only 17 per cent of voters feel that they understand well the issues at stake, while 46 per cent feel they understand the proposals only superficially and 37 per cent do not understand them at all. If that were not enough, the referendum has largely been treated as part of a broader package, which includes the already passed – though still contentious – electoral reform.

Finally, by tying his political destiny to the referendum’s result, Renzi, the career politician, has opened up additional dimensions of the contest regarding attitudes toward the government, the country’s political elite, and even Italy’s relationship with Europe – including the single currency and the migration crisis, at a time when the country’s historic pro-Europeanism is waning. As a result of these cross-pressures, and as shown in Figure 4, the most popular electoral choice of every socio-demographic group except degree-holders is abstention. 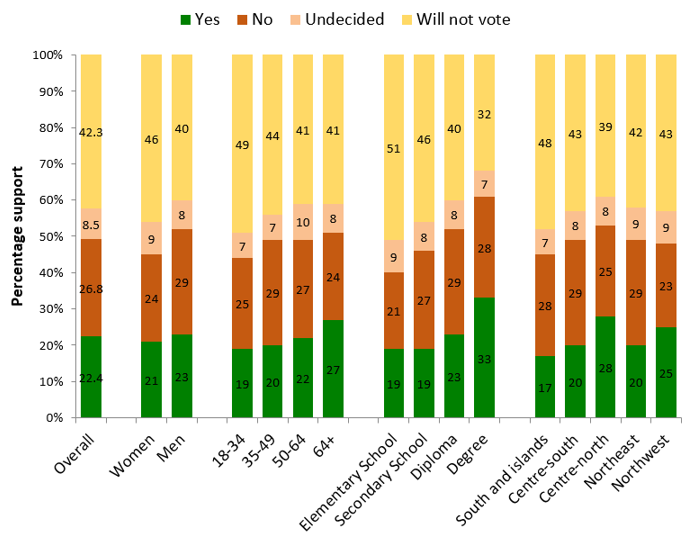 Socio-demographic factors do a fairly poor job of predicting vote patterns in this referendum. Indeed, excluding undecided voters and abstainers, none of the socio-demographic groups that we consider have more than a 60 per cent majority in favour of either Sì or No, with the sole exception of those living in the South and Islands.

The only socio-demographic groups which show majorities in favour of the reforms – notwithstanding undecided voters and abstainers – are the over 64s, those with a university degree and those in the Centro-nord of Italy, which includes Renzi’s home region of Tuscany. The larger share of No voters among the younger groups is partially a reflection of the discontent that many young voters feel about the PD’s gerontocratic practices, leading to significant vote shifts towards the M5S. 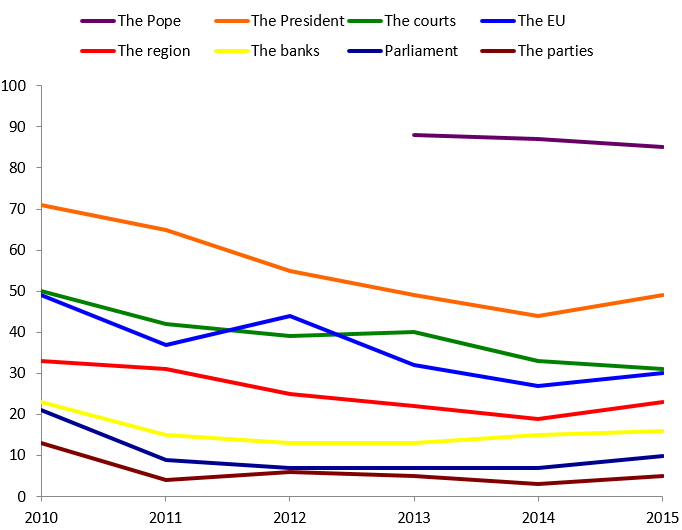 In order to overcome the electorate’s growing dislike of Renzi, undermine No’s anti-establishment arguments, and circumvent voters’ uncertainty over the technicalities of the reforms in time for 4 December, the Yes campaign will have to mobilise Italians’ distrust of the political class. Italy already has a very low rate of trust in politicians – a 2015 survey found that only 10 per cent trusted the Parliament and 5 per cent the political parties, which is nothing new (see Figure 5).

Furthermore, a recent experiment showed that participants were more likely to agree with the constitutional changes when primed with the argument that it would lead to fewer parliamentarians. However, participants were less likely to support the referendum when primed with “Renzi” or his party. In other words, Renzi may still succeed in convincing the population to back him, as long as they do not believe it is him they are backing. This strategy is already being increasingly employed by the Yes campaign, whose marketing is more and more focused on reducing the numbers and salaries of parliamentarians – in other words, “vote for us, to have fewer of the likes of us”.

Note: This article gives the views of the author, and not the position of EUROPP – European Politics and Policy, nor of the London School of Economics. Featured image: the Italian Constitution. Credits: Andrea Di Marzo (CC BY-SA 2.0) 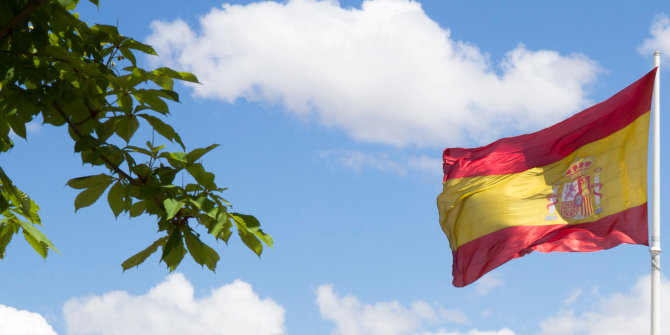 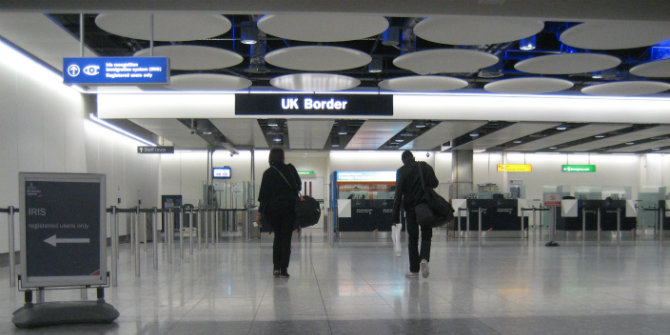