The extent to which EU countries take on their ‘fair share’ of asylum seekers is a contentious issue. Luc Bovens and Jane von Rabenau write on concern within Germany that the country is taking on a higher burden than other EU states. They argue that when compared on a per capita basis with similar EU countries, Germany performs relatively poorly in terms of acceptances for new refugees. Where Germany performs better is with respect to the size of the existing refugee population within the country, however this may be a reflection of the difficulty refugees experience in gaining German citizenship.

Contrary to popular perceptions, Germany’s intake of refugees is relatively low in comparison to other EU countries. Politicians are playing with the numbers so as to overstate how much responsibility Germany is assuming for EU asylum seekers. German politicians and media have recently expressed alarm at the increasing inflow of refugees and routinely talk about record numbers of asylum applications to Germany. These so-called ‘records‘, however, are only records when considered in terms of a very short time span.

German refugee stocks have also decreased. According to data from the German government, there were 1.4 million refugees living in Germany in 1993; there were just over a million in 1997 and by the end of 2012 this number decreased to 430,000. The UNHCR’s count of ‘refugees and people in refugee like situations’ living in Germany is even lower at only 280,000.

Is Germany really accepting a disproportionate share of refugees?

A spokesperson for the CDU/CSU in the German parliament, Stephan Mayer, has claimed that “Germany has carried the main burden of refugees in Europe for a long time. Around every third asylum application in Europe goes to Germany.” Indeed, in 2013, 29 per cent of asylum applications in Europe were received by Germany. However, if we look at applications in per capita terms, then Germany is in seventh position after Sweden, Malta, Austria, Hungary, Luxemburg and Belgium.

Germany’s Federal Minister of the Interior, Thomas de Maizière,recently told Der Spiegel that “it cannot be that four [or] five countries [with Germany among them] are taking the largest number of refugees. This is not in line with the urgent requirement of collective solidarity in Europe.” In a meeting of EU-Ministers in 2013, Angela Merkel reminded the participants that Germany has “quite a large number of asylum seekers that [have been] accepted by European comparisons.”

In absolute numbers these figures are impeccable. However, we should keep in mind that Germany represents one sixth of the EU population and so we would expect it to take in more refugees than smaller member states. Consider the acceptances per capita in the year 2013 – a year in which Germany accepted more refugees than in previous years. As Chart 1 shows, with 25 positive decisions per 100,000 inhabitants, Germany is barely in 12th place in the EU. These figures cast quite a different light on De Maziere and Merkel’s claims.

Chart 1: Number of refugee acceptances by EU countries in first and second instance per 100,000 inhabitants (2013) 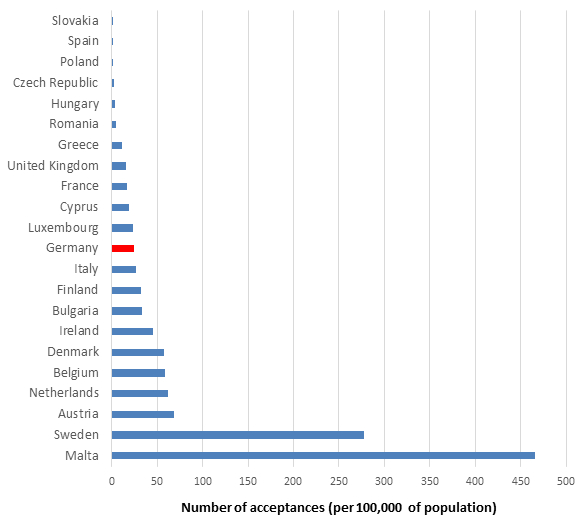 Note: The chart does not include Croatia, Lithuania, Latvia, Portugal, Slovenia and Estonia as the UNHCR does not have complete data for these countries for 2013. Acceptances include granting refugee status and subsidiary protection status. Source: UNHCR

Germany’s refugee acceptances look even less rosy when compared with what we take to be its proper reference group. When we compare the number of acceptances and resident stocks of asylum seekers per capita in each country of the EU, we can divide the EU into three blocs.

The Eastern European countries have relatively low numbers as they have little pull as receiving countries, don’t have the infrastructure to receive asylum seekers and are economically weaker. The Southern European countries, with the exception of Malta and Cyprus, also have relatively low numbers; however, they take in such large numbers of illegal immigrants that we can hardly fault them for their underperformance. And then there is the bloc of 11 Northern and Western European countries (the ‘EU11’), who are very much shouldering asylum responsibilities for the EU. These include Austria, Belgium, Denmark, Finland, France, Germany, the Netherlands, Luxemburg, Ireland, Sweden and the UK. This is the appropriate reference group for Germany.

As Chart 2 shows, when compared to this reference group, Germany performs poorly. The EU11 averages 24 acceptances per 100,000 inhabitants per year. Acceptances include granting refugee status and subsidiary protection status. Sweden leads with 138 acceptances, Ireland is last with 8 and Germany is next to last with 12 acceptances. 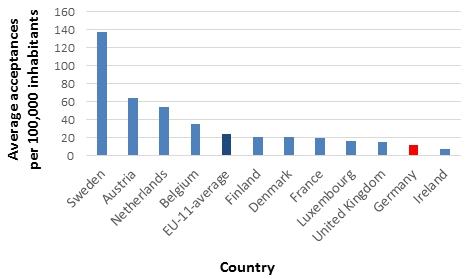 How does Germany do with respect to stocks – i.e. the number of refugees living in Germany? Within the EU11 bloc, Germany currently has 3.5 “refugees and people in refugee-like situations” per 1,000 inhabitants. This puts Germany in fifth position behind Sweden, Austria, Luxembourg and the Netherlands. So, granted, Germany does do somewhat better with respect to harbouring refugee stocks.

But how can Germany do so well in stocks when its acceptances are relatively low in comparison to the other EU11 countries? Compared to North America we have very poor longitudinal data in the EU on refugees and so the best we can do is to put forward a hypothesis. By making the route to citizenship slow and arduous, acceptances can remain low while stocks are high. One can have fewer people enter the gates of refugee or refugee-like status, but if one keeps a tighter lock on the door to citizenship then the holding chamber of people in refugee or refugee-like status may be better stocked.

In summary, Germany’s performance in asylum matters is fairly dismal, especially in comparison to the proper reference class, i.e. the Western and Northern European countries. This is in direct opposition to claims made by German politicians who are presenting the numbers in a manner that is not sensitive to relative population sizes with the aim of relieving Germany of its asylum responsibilities.

Note: This article gives the views of the authors, and not the position of EUROPP – European Politics and Policy, nor of the London School of Economics. The research was supported by a grant from STICERD. Featured image credit: European Council (CC-BY-SA-ND-NC-3.0)

Jane von Rabenau – LSE, Department of Philosophy, Logic and Scientific Method
Jane von Rabenau is a research assistant at the LSE. Her interests are indigenous peoples’ rights, India, inequality and poverty reduction. She is founder of LSE SU Terra Society, a society for the protection of indigenous land rights.