Following the European Parliament elections in May, attention turned toward negotiations over the EU’s ‘top jobs’, notably the President of the European Commission, President of the European Council, and High Representative of the Union for Foreign Affairs and Security Policy. As part of our review of 2014, Maria Giulia Amadio Viceré writes on the selection of Federica Mogherini for the High Representative role. She argues that the appointment, combined with the institutional provisions granted under the Lisbon Treaty, could mark a watershed moment for both EU and Italian foreign policy.

Anyone following the situation in Brussels this year may have been surprised at the increasing presence of Matteo Renzi and his Italian team in EU decision-making. The presence of Renzi was accompanied by growing relevance for Italy during the bargaining over the EU’s ‘top jobs’ which took place after the European Parliament elections.

The appointment of Federica Mogherini as High Representative for Foreign Affairs and Security Policy and Vice President of the European Commission has, in particular, raised the Italian profile at the European level. Indeed, in a wider sense the articulation of Italian interests at the EU level, combined with the institutional modifications which have occurred over the last year, may render 2014 a watershed moment for EU foreign policy.

Even though the Treaty of Amsterdam envisaged a subordinate status for the High Representative to the Council and to the Commission President, the first person to be appointed as High Representative was a high-profile political figure in the shape of Javier Solana, who had played a key leadership role during the Kosovo War as NATO Secretary-General and had been Foreign Minister of Spain.

Indeed, the choice of such an experienced politician provided a higher profile for the EU in external affairs. Nevertheless, the first High Representative was not generally encouraged to express independent positions if they had not been formally endorsed by the Council beforehand. In 1999, for instance, Solana publicly supported the idea that the EU should have a permanent seat on the United Nations Security Council, in addition to those of the United Kingdom and France. Promptly Ministers of Paris and London clarified that the High Representative’s remarks were not reflecting common EU visions.

Moreover, the rotating Council presidencies did not reserve much consideration for inputs coming from the first High Representative in their daily work. In spite of this, from 1999 the military capabilities of the EU were substantially upgraded. This militarisation process was reflected in the first ‘European Security Strategy’ issued on 12 December 2003 under the title “A secure Europe in a better world”. It is thanks to this trend that the Council of the European Union is attributed today not only civilian but also military prerogatives. In other words, the much recently debated ‘civil-military comprehensive approach’ owes a large part of its salience to Solana.

Even though the first High Representative was widely considered to have done a good job overall, the institutional limitations of the role quickly became apparent. As Toby Vogel has noted, “Solana served ten years as the EU’s foreign policy chief but he waited in vain for the Lisbon treaty, which would have enhanced his powers, combining the role of High Representative of the Council of Ministers with that of a European commissioner – the double role that Ashton enjoys”.

To solve these institutional inefficiencies, a merging of the posts of High Representative and Commissioner for External Relations into a single job was included in the Constitutional Treaty with the introduction of the Minister for Foreign Affairs of the Union. Later on, after the failure of the Constitutional Treaty, the title of the position was symbolically changed to ‘High Representative of the Union for Foreign Affairs and Security Policy’.

As soon as it was apparent that the Treaty of Lisbon would come into force, European leaders selected the new High Representative. While under the Treaty of Amsterdam the limited powers of the role were counterbalanced by the selection of a high profile figure, the more extensive Lisbon powers resulted in the relatively inexperienced Catherine Ashton being appointed.

Ashton, who had previously been the Leader of the UK’s House of Lords and a member of the British Cabinet, had also held a role as a European Commissioner and was a prominent supporter of the UK’s ratification of the Lisbon Treaty. Yet the general feeling was that Member States had intentionally nominated a low-profile figure in order to maintain as much control as possible over their national foreign policy prerogatives. The political commentator Nile Gardiner went as far as to ask whether it constituted ‘the most ridiculous appointment in the history of the European Union’.

However, the new High Representative was generally underestimated in her personal qualities, while the position itself also proved considerably more complex than the one held by Solana. The Lisbon Treaty also envisaged the creation of a quasi-foreign ministry and diplomatic corps in the shape of the European External Action Service, which Ashton oversaw when it was formally established in 2010. Nevertheless, despite proving more successful than originally anticipated by some commentators, there remained general questions over whether Ashton had fully exploited the potential of the new institutional arrangements.

When the name of Federica Mogherini was first put on the table in the summer, similar criticisms to those faced by Ashton began to emerge. Whatever one might think of Ashton’s performance, it is undeniable that the role of High Representative is complex and entails substantial challenges. Most of Ashton’s critics focused on her occasionally slow response to foreign policy developments (e.g. the Arab Spring) or her absence from international events with high global salience, such as the earthquake in Haiti in 2010. These are precisely the inherent risks of a multifaceted institutional role which carries the full weight of responsibility for EU foreign policy, although it is an open question as to whether Ashton could have delegated her responsibilities more effectively.

Federica Mogherini is not as experienced in international relations as Javier Solana was when he first took office. As a consequence of this inexperience, however, she will likely have less to lose and more to gain from her mandate. Indeed, Italian Prime Minister Matteo Renzi was also considered to lack experience when he came to power in February. Like Renzi, if Mogherini can display genuine ambition and strength – while also showing willingness to delegate to her experienced staff when necessary – the institutional provisions granted by the Lisbon Treaty provide all the ingredients for her appointment to be a watershed moment for both EU and Italian foreign policy.

However this will require precise and quick action. Unlike her predecessor, Mogherini will not have her time constrained by the establishment of the European External Action Service. Jean Claude-Juncker, the new Commission President, has also indicated that he will pursue a more downsized role in foreign affairs than José Manuel Barroso. According to the ‘political guidelines’ issued by Juncker, the High Representative will from now on coordinate the work of the Commissioners for Trade, Development and Humanitarian Aid, as well as Neighbourhood Policy and Enlargement. In a similar manner to Renzi, Mogherini appears to already be taking these responsibilities seriously, with the High Representative’s office even being moved to the Berlaymont building – the headquarters of the European Commission.

Although opinions on Renzi’s experience in Italy vary widely, Mogherini is in a comparable position, with the office she has inherited requiring assertive leadership. Perhaps the lesson from 2014 is that we should not underestimate young, ambitious leaders who have little or nothing to lose, but certainly a lot to gain. 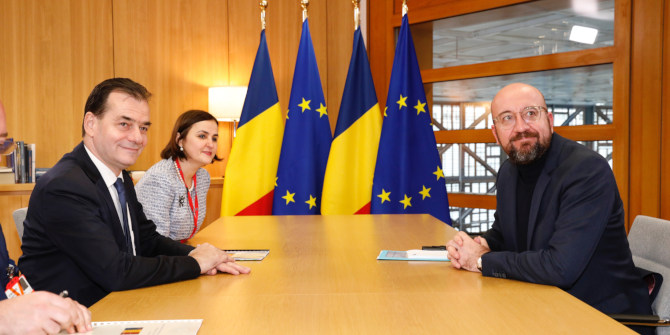