On 25 January Greece will hold parliamentary elections. Ahead of the vote, Eri Bertsou and Stuart Brown take a final look at the election, providing an overview of the Greek party system, the latest polling, and some of the key contextual factors such as the impact of the financial crisis on the Greek economy and the attitudes of citizens toward the European Union.

The Greek parliamentary elections scheduled for 25 January have generated almost as much attention across the rest of Europe as they have within Greece. With the Coalition of the Radical Left (Syriza) maintaining a consistent polling lead throughout the short campaign, there has been intense speculation over what a Syriza victory could mean for the Greek economy, the country’s participation in the euro, and even the future of the Eurozone itself. Ahead of the vote, this article takes a final look at some of the key figures on previous elections in Greece, the current polling, the country’s economy, and Greek attitudes toward the European Union.

The Greek party system ahead of the 2015 elections

Prior to the 2012 parliamentary elections, Greece essentially had a two party system, with the centre-left Pasok competing against the centre-right New Democracy for control over the country’s government. Following the Greek debt crisis, which started in 2009, support for Pasok collapsed and a multitude of smaller parties began to challenge the existing order. Chief among these was Syriza, which managed to firmly establish itself in second place behind New Democracy during both of the elections held in 2012 (in May and June) by mobilising support on the basis of an anti-austerity, and anti-memorandum platform. Syriza then followed this up in 2014 by gaining the largest vote share in the country’s European Parliament elections. Figure 1 below shows the development of party support from 2007 until 2012. 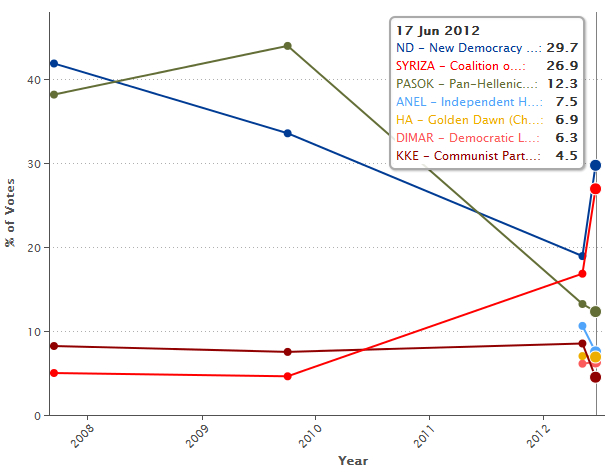 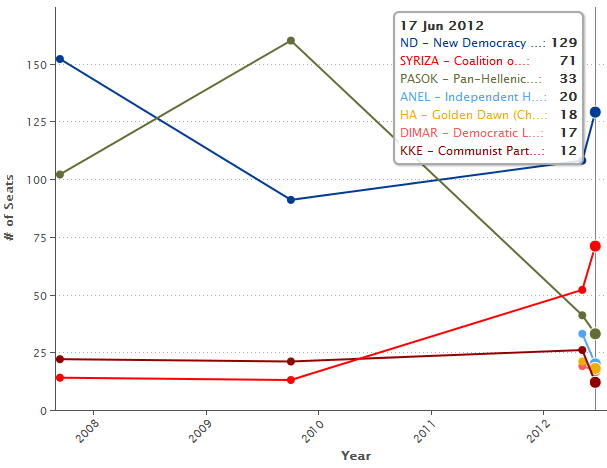 Note: There were four elections held during this period (September 2007, October 2009, May 2012, and June 2012). To keep the charts manageable only the top seven parties in the last election in June 2012 are shown. For more information on the parties see: New Democracy (ND), Coalition of the Radical Left (Syriza), Panhellenic Socialist Movement (Pasok), Independent Greeks (ANEL), Communist Party of Greece (KKE), Golden Dawn (HA), Democratic Left (DIMAR). The charts are provided by the Political Data Yearbook: Interactive (part of the European Journal of Political Research Political Data Yearbook) available online at http://www.politicaldatayearbook.com/

Alongside Syriza, several other parties have benefitted electorally from the changes which have occurred in the Greek party system since the crisis. Arguably the most notable is the far-right Golden Dawn, which finished third in the 2014 European Parliament elections. Despite its leader and five prominent party figures currently being in prison awaiting trial, the party is still likely to have a significant presence in the next parliament.

While Golden Dawn continues to attract headlines, however, the newly formed centrist party The River (To Potami) is currently polling in third place behind Syriza and New Democracy. Founded by Stavros Theodorakis in 2014, the party is solidly pro-European and committed to keeping Greece inside the Eurozone. Theodorakis has been described as a potential key player, should both of the largest two parties fail to gain a majority.

On the left of the political spectrum, Pasok now finds itself in competition not only with Syriza, but also a new party, the Movement of Democratic Socialists (Kinima), led by former Greek Prime Minister (and former leader of Pasok) George Papandreou. Kinima, which was only established a few weeks prior to the election, looks unlikely to finish above the three per cent electoral threshold required to enter parliament, but it could nevertheless take support away from Pasok. Among the other parties worthy of note are the Communist Party of Greece (KKE), which has been polling a steady 5-6 per cent of the vote, and the Independent Greeks (ANEL), who were founded in 2012 by a former New Democracy MP, Panos Kammenos, and stand on a broadly anti-bailout platform. Figure 2 below shows a ‘poll of polls’ from 11-18 January. 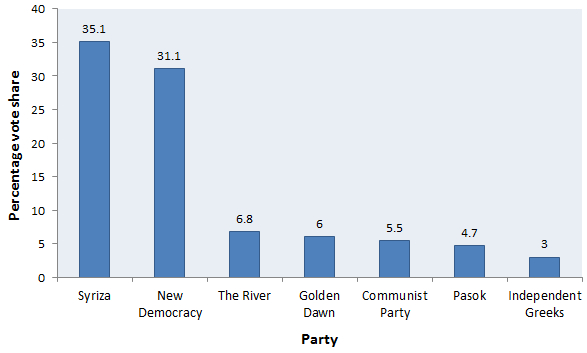 Note: Only parties which had 3 per cent or higher are shown. Support for other parties stood at 8.3 per cent. Those who are undecided or intend to abstain are not shown. For more information on the political parties see: Coalition of the Radical Left – Unitary Social Front (Syriza); New Democracy; The River (To Potami); Panhellenic Socialist Movement (Pasok); Communist Party of Greece (KKE); Golden Dawn; Independent Greeks. Polls are compiled by Metapolls and were conducted by Alco, Pulse RC, Metron Analysis, Metrisi, Kapa Research, Interview, Rass, Public Issue, Palmos Analysis, University of Macedonia between the dates of 11 January and 18 January.

The role of smaller parties is important for two further reasons. First, the nature of the Greek electoral system means that the parties which fail to make the electoral threshold will have an impact on the balance of power between Syriza and New Democracy. The country’s election law provides a ‘bonus’ of 50 seats to the party or coalition that wins a plurality of the votes. In practice the fewer parties who make it into parliament, the greater the chance there will be that the leading party can gain a majority (151 out of the 300 seats in parliament).

Second, in the event that Sunday’s election fails to give either party a majority (which remains quite possible despite the 50 seat bonus) there will have to be a period of negotiation and coalition building where parties such as To Potami could be key. Syriza’s leader, Alexis Tsipras, has cast doubt over whether he would be willing to enter into a coalition with To Potami, but in principle they remain one of the most likely partners.

The Greek economy and attitudes toward the EU

The tectonic changes in the party system can be more easily understood in the context of the Greek financial crisis and its impact on the economy and society as a whole. In total, the country’s economy has shrunk by around a quarter since 2010: an unprecedented level of economic contraction. With one in four people out of work (including a disastrous youth unemployment rate of around 50 per cent), and 23.1 per cent of the population at risk of poverty according to Eurostat (see the Table below), many Greeks have not felt any macroeconomic benefit from the austerity policies pursued since the crisis.

Table: Percentage of citizens at risk of poverty before and after social transfers in Europe (2011 and 2012) 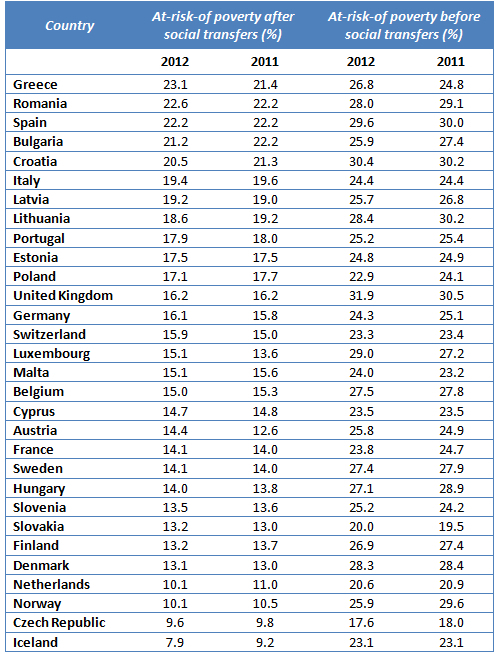 The crisis has also had an impact on the attitudes of Greek citizens toward the EU. Traditionally, pro-European attitudes have been the norm in the country, with a majority of citizens reporting trust in the EU and its institutions. However the long recession and declining social indicators have steadily eroded citizen trust toward the EU, particularly given the perceived link between the country’s economic hardship and policies stemming from Brussels and Germany.

Nevertheless, the fact that one in four Greek citizens still claims to trust the European Union, as shown in Figure 3 below, is an indication that with more effective cooperation and the right policies confidence could be restored. Greeks overwhelmingly wish for their country to remain in the Union and the Eurozone, but austerity fatigue is taking its toll and it is uncertain whether Greek society would be able to deal with any additional pressure. 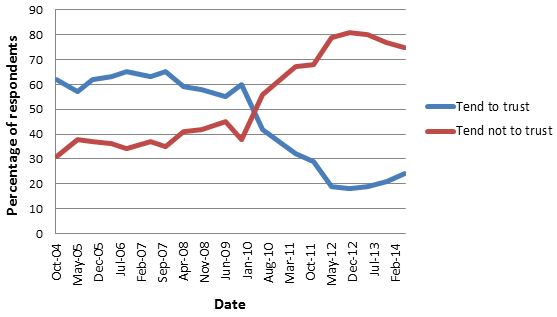 Against this economic and social backdrop, it is likely that Syriza will emerge as the winner of Sunday’s election and that Tsipras will have the mandate to form a government – the sixth government since the beginning of the financial crisis in 2008 (including Pikrammenos’ caretaker government). Whether this new government will be able to provide – so far elusive – political stability for the country, while delivering on its promises to Greek voters and staying on a European course, will be the topic of discussion for weeks to come.

Note: This article gives the views of the authors, and not the position of EUROPP – European Politics and Policy, nor of the London School of Economics. Featured image credit: Morpheu5 (CC-BY-SA-3.0)

Eri Bertsou – LSE, Government
Eri Bertsou is a PhD Candidate in the Department of Government at the LSE conducting research in political behaviour in Europe. She holds a BA in Philosophy and Literature from the University of Warwick, an MSc in Political Communication from the London School of Economics and has professional experience in international financial markets.