When national officials are appointed to international administrations such as the European Commission, how can we ensure that they act independently, rather than merely in the interest of their own national government? Jarle Trondal, Zuzana Murdoch and Benny Geys present findings from a survey of national officials who have been ‘seconded’ to the Commission for a specific period of time. Their research shows that even though there should arguably be an incentive for such individuals to retain loyalty to their national government, there is greater attachment to the Commission than might be expected, particularly when national officials feel they are being treated in the same manner as permanent Commission staff.

National officials working in international bureaucracies such as the European Commission regularly invoke the fear that member-states can strategically use such officials for influencing decision-making to their advantage. In a recent study, we theoretically analyse the conditions under which the autonomy of national civil servants in international bureaucracies might become compromised.

We base our research on a unique survey of 400 so called ‘Seconded National Experts’ (SNEs) in the European Commission, who are individuals working at the national level (typically national civil servants) that are ‘seconded’ to the Commission for a specific period of time. The dataset derives from a web-based survey administered between January and April 2011 to all 1,098 of the seconded national experts who were then active in the Commission.

Gauging the autonomy of international bureaucracies

One central mechanism for explaining any lack of independence of national civil servants in international bureaucracies is the ‘revolving door’ phenomenon. As the name suggests, this implies that individuals intending to return to their home institution at the national level after working for the Commission face a strong incentive to avoid fully discarding the expectations and aspirations of their home institution, since this might have important career consequences upon their return. Yet, the implications of this revolving door might not be equal for all individuals, and can be expected to depend on both the relations between national civil servants and their home and host institutions, as well as the organisational similarities between the home and host institutions.

Chart: Autonomy of national civil servants working at the Commission from member-state influence 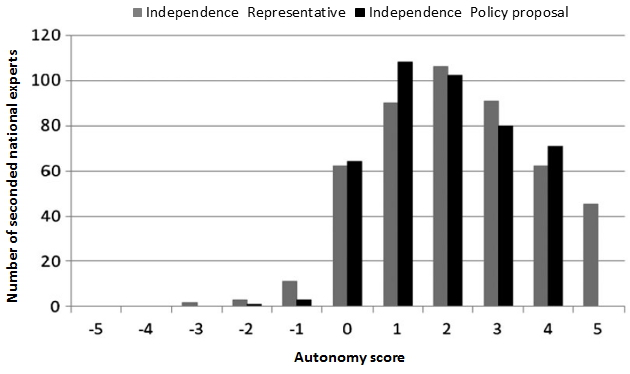 Note: The chart is generated using two distinct questions. The first question (indicated by ‘independence representative’ in the chart) was: “In your daily work, to what extent do you feel you act as a representative of the Commission/your country’s government?” This was asked twice (once with the ‘Commission’ wording, once with the ‘country’s government’ wording) and the difference between each of the scores is shown in the chart, where a positive value indicates that attachment to the Commission was stronger than attachment to the individual’s national government. The second question (marked as ‘policy proposal’) used the same system, based on the following question: “When putting forward a proposal, how much emphasis do you put on the best interests of the Commission/your home country?” For more information on the calculations see the authors’ full study.

Overall, our findings provide only weak support for the ‘revolving door’ theory, whereby individuals who expect to return to their home institution should lack autonomy from their national governments while working at the Commission. More support is found for the notion that the lack of a clear structural disconnect between seconded national experts and their two organisational affiliations undermines their autonomy. Specifically, individuals who perceive their treatment to be equal to that of permanent Commission staff act more strongly in line with Commission-specific behaviours and roles than those who perceive themselves to be treated differently from permanent staff.

Finally, our data suggests that seconded national experts appointed from federal (rather than unitary) states profess lower levels of national as well as Commission attachment. One tentative explanation for this is that our results reflect the importance of regional-level loyalties for officials from federal countries. For these officials, it might indeed be regional influence that affects their autonomy while working in an international organisation. Unfortunately, our data do not allow us to pursue this in more detail, so this interpretation would require further substantiation in future research.

For a longer discussion of this research, see the authors’ forthcoming article in the European Journal of Political Research

Note: This article gives the views of the authors, and not the position of EUROPP – European Politics and Policy, nor of the London School of Economics. Featured image credit: Richard Parmiter (CC-BY-SA-3.0)