The Speakers of all EU Parliaments came together for their annual conference on 20 and 21 April 2015. Among the items on their agenda were the role of EU Parliaments in negotiations on international treaties and the functioning of two policy-specific inter-parliamentary conferences, respectively created in 2012 and 2013: The “Inter-parliamentary Conference for Common Foreign and Security Policy (CFSP) and Common Security and Defence Policy (CSDP)” and the Inter-parliamentary Conference that was established on the basis of Article 13 of the Treaty on Stability, Coordination and Governance (TSCG), the so-called Fiscal Compact.

While many of the “principles” agreed by the Speakers do not go beyond the common ground of previous documents, two points are noteworthy: First, the purpose of the conference is defined more clearly: It “should provide a framework for debate and exchange of information and best practices in implementing the provisions of the Treaty in order to strengthen cooperation between national Parliaments and the European Parliament and contribute to ensuring democratic accountability in the area of economic governance and budgetary policy in the EU, particularly in the EMU, taking into account the social dimension and without prejudice to the competences of EU Parliaments.” (p. 5)

Second, the Speakers refer to the timing of the conference, a long-standing issue, and state that “the Conferences should be convened before the presentation of the Annual Growth Survey and the adoption of the National Reform Programmes.” (Conclusions, p. 6) This is of particular importance in order to make the voice of parliaments heard in the European Semester which is dominated by the executives. The table below provides a summary of progress since the Speakers’ Conference in Nicosia in April 2013. 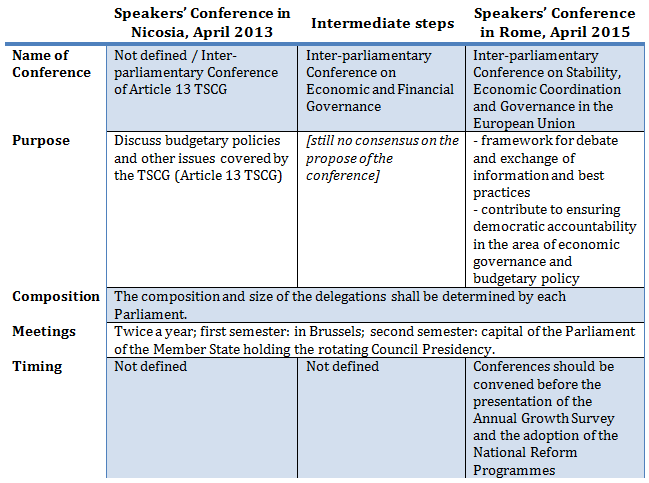 With respect to the Conference on CFSP/CSDP, the Speakers endorsed the review of the functioning of that conference. Here, the best practice of further exploring shifting “the balance from lengthy plenary presentations […] to more time for questions and answers” (Best Practices, p. 2) might indeed be very useful in order to foster interaction at such conferences in the future.

Finally, the issue of international treaties was discussed at the Speakers’ Conference with a particular emphasis on the Transatlantic Trade and Investment Partnership (TTIP). Speakers “invite” the European Commission to grant Members of national parliaments the same access to texts about TTIP as Members of the European Parliament. They support the tough stance of the European Parliament which will adopt its TTIP recommendations in a key vote in May 2015 and which has already rejected other international agreements (SWIFT and ACTA) with a veto on the basis of the new competences that the Lisbon Treaty had referred to it in Article 218 TFEU.

Taking these items on the agenda of the Speakers’ Conference and the efforts of the Chairpersons of EU Affairs Committees to create a “Green Card” for national parliaments which would allow them to propose to the European Commission to start a legislative initiative. If the Commission does not, it would have to state its reasons, as is the case with the “Yellow Card” when national parliaments consider a legislative act to be in breach with the subsidiary principle.

First Vice President Frans Timmermans is the man who will have to respond to this – rather cautious – ambition of national parliaments to play a more active role. In his reply to an earlier letter by the Chairperson of the Latvian Parliament, he did not explicitly refer to the idea of an “enhanced political dialogue” and made it clear that the Commission preferred a more “pragmatic” way: national parliaments are only allowed to make slow progress towards more cooperation.

The underlying problem of the status-quo of inter-parliamentary cooperation is that it does not provide sufficient incentives for parliamentarians to get involved. Instead, the members of national parliaments use the traditional way to control EU policy-making via domestic scrutiny processes. Opposition parties in particular should, however, take advantage of the opportunities to cooperate with their counterparts from other Member States and from the European Parliament in order to reduce their information asymmetries compared to the governing parties: the Inter-parliamentary conferences on Stability, Economic Coordination and Governance and on CFSP/CSDP as well as the Conference of Parliamentary Committees for Union Affairs of Parliaments of the European Union (COSAC) still have the potential to play a vital role for debating and exchanging information and best practices in these policy areas.

Valentin Kreilinger – Hertie School of Governance
Valentin graduated from the LSE with a MSc Politics and Government in the European Union. He worked as a Research Fellow at Notre Europe – Jacques Delors Institute from 2011 to 2014 and is now a PhD candidate at the Hertie School of Governance in Berlin. His main research interests are national parliaments, fiscal and economic policy coordination in the Economic and Monetary Union, and inter-parliamentary cooperation in the EU.