Is the Greek debt crisis simply an isolated case or could similar debt problems develop in other countries across Europe and the rest of the world? Michael Ben-Gad writes that while it is easy to find examples of mismanagement and clientelistic behaviour in Greek society, it would be dangerous to regard the crisis as unique to Greece. He argues that with rapid aging and an unwillingness to adjust levels of spending to match new demographic realities, there is the clear potential for debt crises to emerge in other Western societies in the coming decades.

Now that the new bailout plan for Greece, the third so far, has been approved, one is given to wonder how soon before it expires in three years’ time negotiations will commence on the fourth, and what form this next plan will take. In all likelihood this fourth bailout – like the second, but not like the first or third – will include more debt write-downs. If so, one can see a pattern gradually emerging: in odd-numbered bailouts creditors lend money to Greece, and in even-numbered bailouts they write the debt down.

The reason another write-down seems inevitable is that the €332 billion debt, amounting to 187.9 per cent of GDP, is already unsustainable in the long term, and augmenting it with another €86 billion in new borrowing does not make it less so. Indeed, although about half the €50 billion in a new trust fund to be generated by privatisation is earmarked for the recapitalisation of Greece’s ailing banks, Finance Minister Euclid Tskalalotos (in the week before the government collapsed) already indicated the money may be needed well before the equivalent value in state assets can be sold. We can name that bailout number 3½.

Officially, the Greek government now devotes 4.1 per cent of GDP to the payment of interest on its debt. Among the countries of the OECD, only Portugal’s burden is higher, at 4.2 per cent. In the short term, the €7.6 billion bill is manageable because, thanks to the second bailout, €2 billion worth of interest payments and profits that would ordinarily accrue to the ECB and Eurozone on their share of outstanding Greek debt is instead remitted back to Greece. In addition, interest payments totalling €12.9 billion owed to the European Financial Stability Facility (EFSF) are deferred through 2022.

So suppose the Greek government, for decades to come, manages to sustain primary budget balances sufficient to satisfy all its interest payments. As the debt owed to the ECB, EFSF and IMF matures, how many investors in the bond markets will volunteer to refinance the gargantuan principal at anything close to sustainable interest rates? Would any of them really be prepared to forget the events of these last five years? In the meantime, it is worth considering what brought Greece to this point, and whether its experience has any wider implications.

One need not look very far to find examples of mismanagement at the heart of the Greek state. An International Labour Office (ILO) report from 2012 by Zafiris Tzannatos and Yannis Monogios describes the various monthly allowances paid to Greek public sector workers: €690 paid monthly to each of 420 employees for “warming-up car engines” at the Greek Telecommunications Organization; €420 to 1,987 employees in the National Railways Organization for “washing their hands”; a “propeller allowance” of €840 paid to 653 coastguards; an “antenna bonus allowance” of €1,120 to 329 employees at the Athens-Piraeus Electric Railways Company; a “fax services allowance” of €870 to 657 employees at the Electrical Power Corporation; and my personal favourite—a “folder transferring allowance” of €290 monthly paid to each of 6,800 office workers (no doubt just recompense for such hazardous duty).

The Greek Petroleum Group paid an “annual canteen allowance” of €120 to each member of staff even though workers enjoyed access to an in-house restaurant where food was provided free of charge. The authors of the report claim there was even a provision for an allowance “for not getting any other allowances”. One could argue that these allowances were no different from other types of compensation, and were paid in lieu of still higher salaries (work in the public sector already commanded a substantial premium). Yet this strange system of allowances emerged for a reason. It allowed each politician to circumvent national pay scales and purchase the political support of anyone employed within his or her particular government fiefdom.

It is tempting to dismiss Greece as an isolated case – its clientelistic political culture the legacy of first Byzantine and then Ottoman rule. Yet Greece has now been an independent state for nearly two hundred years, and a democracy with a thriving free press since 1974. So how then was it possible (according to the same ILO report) for employment in the public sector to increase from 264,000 to 824,000 between 1970 and 2009 without prompting a public outcry? Why did so few object when among the 580 different job categories classified as hazardous and thus eligible for early retirement were included hairdressers (dangerous chemicals), radio and television presenters (microphone bacteria) and musicians playing wind instruments (gastric reflux)? Spending on pensions now costs the equivalent of 17.5 per cent of GDP, and according to work by Jagadeesh Gokhale, the total scale of the Greek state’s unfunded liabilities in 2011 may have already reached 1,340 per cent.

This last number represents the present value of the difference between future expenditures and revenues given current legislation. Seem high? Readers may be surprised to learn that the equivalent numbers for the United Kingdom and the United States, at 870 per cent and 900 per cent respectively, are not that much lower. If this seems unlikely, according to the central debt projection prepared by the Office of Budget Responsibility, even if none of the cuts implemented during the last parliament or planned during this one are ultimately reversed, the UK’s debt will begin climbing rapidly from 2033 even if the state retirement age is gradually increased over the next half century to 70 years.

Similarly, the Congressional Budget Office in the United States prepares two sets of projections. In the extended baseline forecast they assume income tax brackets are only adjusted in line with inflation, so that as the economy grows an increasing share of the population is swept into the highest tax brackets. According to that forecast, US government debt will reach 123 per cent of GDP in 2055. According to its more realistic Alternative Fiscal Scenario, where tax brackets adjust with the growth in incomes, by that same year the debt will exceed 250 per cent. Other Western nations face similar challenges. Seen in this light, the recent experience of Greece seems less a bizarre Balkan exception and more a preview of coming attractions.

Of course, the rapid aging of Western societies combined with an unwillingness to adjust to its fiscal implications comprise the common thread that underlies all these problems. Welfare states designed for a time when life expectancy was significantly lower and fertility rates substantially higher need to be recalibrated in light of these new demographic realities. Will this happen? My guess is no, because the very mechanism which causes spending on healthcare and pensions to rise – namely, the growing size of the older population – also enlarges the constituency that benefits from and votes for these policies. Furthermore, mass immigration, even if large enough to significantly ameliorate the growth in the aged dependency ratio, will also make higher transfer payments for elderly natives, financed by more debt rather than higher taxation, that much more attractive.

Consider again the case of Greece. Half a century ago the country had very high birth rates, and nearly everyone was of native origin. Today, fertility rates are well below replacement, and immigrants and their children are expected to comprise a substantial portion of the next generation (already in 2011, 19 per cent of those aged 20 to 44 were foreign-born). In the absence of this immigration, and in the absence of the current high rates of emigration for young native-born Greeks, voters might have resisted policies that inflated their own standard of living at the expense of their children’s future. But if each new immigrant acquires not only a share of all the public assets accumulated before he or she arrived but also a share of the liabilities, voters may quite rationally disregard the future cost of their choices.

If my hypothesis is correct, we might expect that as other Western societies simultaneously age and absorb more immigrants, the public mood will shift still further in favour of yet more transfers, healthcare and government employment (for natives) financed by debt, and less public spending devoted to investments in research and development, infrastructure and education. Ancient Greece is where Western civilisation began, and modern Greece is where it ends.

Note: This article gives the views of the author, and not the position of EUROPP – European Politics and Policy, nor of the London School of Economics. Featured image credit: eurocrisisexplained.co.uk (CC-BY-SA-3.0) 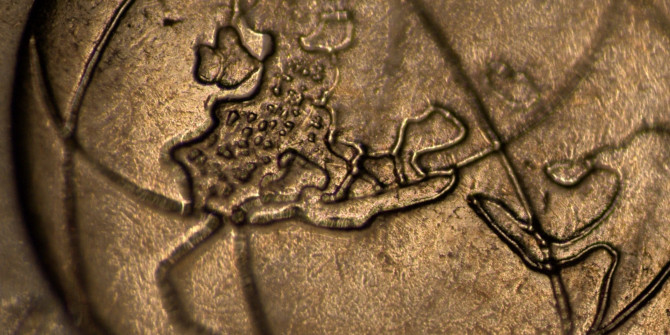