A referendum is scheduled in the Netherlands on the EU-Ukraine Association Agreement signed in 2014. Simon Otjes writes on the domestic political developments that led to the referendum being called and what the implications of a ‘no’ vote could be. He notes that while it is likely the agreement would simply be modified if Dutch voters reject it, the referendum will lay the foundations for the next parliamentary elections in 2017.

On 6 April, the Netherlands will hold a referendum on the Association Agreement signed between the European Union and Ukraine in 2014. The Economist has characterised the referendum as ‘bizarre’; while the President of the European Commission, Jean-Claude Juncker, has warned that a ‘no’ vote could lead to ‘a continental crisis’. But why has a referendum been called and how is the campaign shaping up? And what will be the implications of the vote?

Why is the referendum being held?

The referendum was called by a popular initiative, with 427,939 Dutch citizens signing a petition to ask that the government organise it. The driving force behind the petition was the so called ‘GeenPeil’ initiative, a joint venture between the right-wing, ‘shock-blog’ GeenStijl and two Eurosceptic organisations, the Forum for Democracy and Citizen Committee EU. The latter two organisations brought a citizen initiative to parliament in 2014, which would require a referendum for any transfer of sovereignty to the EU.

The Dutch Parliament did not adopt the initiative, but what it did adopt in 2015 is a new referendum law. This allows citizens to call for a consultative referendum on bills that have passed through both houses of parliament. Although the vote on the Association Agreement is technically non-binding, a majority in parliament has already announced that they will respect the result of the referendum.

In essence, GeenPeil took aim at the first piece of EU-related legislation to come out of parliament since the referendum law came into effect. The decision to focus on the Association Agreement between the EU and Ukraine was not oriented against the agreement as such, but rather against what they perceive as a lack of influence for Dutch voters within the EU.

The agreement would allow free trade between Ukraine and the EU, support the rule of law in Ukraine and allow Ukrainians to enter the EU more easily. The agreement was a key element in the Ukraine crisis: when pro-Russian president Viktor Yanukovych refused to sign it in 2013, pro-European citizens protested in Kyiv (the movement later being dubbed ‘Euromaidan’). These protests led to the impeachment of president Yanukovych, but also triggered the Russian annexation of Crimea and an ongoing civil war in eastern Ukraine.

One issue that looms over the campaign is the 2005 referendum on the Constitutional Treaty: that year, 61.6 per cent voted ‘no’, on a turnout of 63 per cent – even though 85 per cent of the Members of Parliament were in favour of the treaty. For both those on the winning and losing side of the vote, the campaign still represents a sore point. The ‘yes‘ camp attributed their defeat to the lack of popularity of the then ruling government, which has resulted in a general reluctance by the present government to actively campaign in the upcoming referendum. For the ‘no’ camp, there is still a degree of bitterness about the subsequent events where, after a period of reflection, the EU adopted the Treaty of Lisbon, which implemented most of the Constitutional Treaty.

In the referendum on the Association Agreement, the current ‘no’ camp is led by the Forum for Democracy and the Citizen Committee. They emphasise both the possibly negative effects of the treaty for the Netherlands and Ukraine as well as the undemocratic nature of EU decision-making. They are joined by the radical right-wing populist Party for Freedom (PVV), led by Geert Wilders, the left-wing Socialist Party, and the single-issue Party for the Animals (PvdD), which focuses on animal rights.

These three opposition parties are all Eurosceptic and participated in the ‘no’ campaign in the 2005 referendum. They each voice different concerns about the agreement. While the PVV focuses on the potential social-economic costs for the Netherlands, due for instance to increased labour migration, the PvdD has cited battery cages, which are outlawed in the Netherlands, but are still legal in Ukraine, as a key issue.

For the ruling Liberal/Labour government, the parallels with the unpopular administration that campaigned in the 2005 referendum are clear: much like that government, the present coalition has lost public support due to cuts in healthcare and social security. The coalition parties have seen their support halve since the 2012 elections. If the referendum again turns into an effective vote on the government, it is likely to lead to a defeat.

The social-liberal party D66 and to a lesser extent the left-wing green party GreenLeft have been more ardent in their support. They emphasise the need to protect and support the budding democracy in Ukraine. The other parties in parliament, from the traditionally Eurosceptic orthodox protestant parties to the pensioners’ party and the Christian Democrats, have voted in favour of the treaty but will not actively campaign. Part of this gap is filled up by the non-partisan ‘yes’ campaign, Vote in Favour (of) the Netherlands, which is led by a number of former politicians and a former ambassador to Ukraine. So far their campaign has focused on fact-checking the ‘no’ campaign.

Polling now, before the start of the campaign, indicates that turn-out is likely to exceed 30 per cent and that a majority of voters lean towards a no vote. Polls also indicate that when informed about the actual substance of the agreement, respondents tend to favour it.

Juncker has warned that Russia will benefit most from a no vote, as it may spark a continental crisis. This scenario seems unlikely. An analogy with the 2005 European Constitutional Treaty seems more realistic: after France and the Netherlands rejected it, elements of the treaty were renegotiated. If the Ukraine-EU association agreement were rejected by Dutch voters, further implementation of the agreement may be postponed and the Netherlands could ask for renegotiation or exemption of certain passages that proved particularly controversial during the referendum campaign. The Netherlands could ask to be exempted from the immigration paragraph, for a stricter enforcement of animal welfare regulation, or ask for an unequivocal statement from the European Council that Ukraine will not join the EU.

The agreement will likely be implemented independently of what the voters decide. The EU-critical Amsterdam Professor of Financial Geography, Ewald Engelen, has argued that paradoxically because of this likely outcome, citizens can easily afford to vote no: ‘the genius of [the referendum] is that it has no consequence; the treaty will be ratified anyway. It is a crystal clear popularity poll: for or against the [political] caste – that is the question.’

This way, the referendum may form a precursor to the elections scheduled for March 2017: if the agreement is defeated it may indicate a lack of popular support for the current government and underline the support that populist and Eurosceptic parties have gained in the polls, in particular the PVV, which is currently the only party to gain more than 15 per cent of the vote in recent polls. It may also set-up the pro-European D66 (and to a lesser extent the GreenLeft) as the natural opponent of the PVV in the coming elections. Moreover, if the treaty is only revised cosmetically, this may boost cynicism toward the EU and the political elite in the Netherlands.

Note: This article gives the views of the author, and not the position of EUROPP – European Politics and Policy, nor of the London School of Economics. Featured image credit: Timon91 (CC-BY-SA-2.0)

Simon Otjes – Groningen University
Simon Otjes is a Researcher at the Documentation Centre Dutch Political Parties of Groningen University. His research has examined political parties, party systems and spatial models of party positions in the Netherlands and the European Union. He has published in American Journal of Political Science and Electoral Studies. 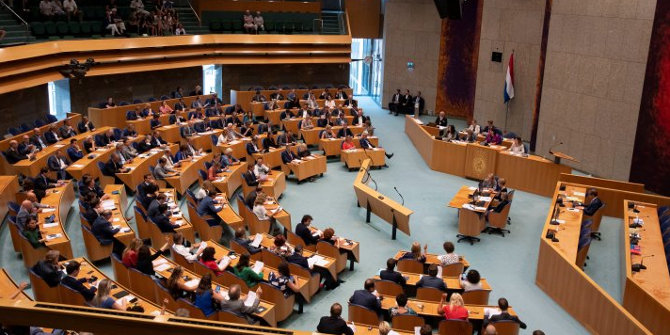