The extent to which British MEPs are appointed to key positions in the European Parliament can be expected to have an impact on their influence over the EU’s legislative process. In the latest article in our UK influence series, Simon Hix and Giacomo Benedetto assess how successful British MEPs have been in this respect since 2004. They note that despite a growing number of UKIP MEPs, who have not competed for many key offices, British MEPs have managed to capture a number of powerful agenda setting positions.

The European Parliament has two main types of power-positions. First, there are the top offices: the Bureau members, the political group leaders, and the chairs of the 22 committees. The executive Bureau comprises the Parliament’s President, the 14 Vice-Presidents (who chair the plenary sessions), and the 5 Quaestors (who look after the welfare of MEPs). The political group leaders (‘Presidents’) together determine the plenary agenda, while the committee chairs shape their committees’ agendas and play a key role in legislative negotiations with EU governments and the Commission in their respective policy areas. These top offices are assigned at the beginning of each five-yearly term and re-assigned half-way through a term.

Second, there are the rapporteurs. A rapporteur is an MEP chosen by his/her committee to write a report on a piece of legislation, the EU budget or another issue. The rapporteur shepherds the report through the committee and the plenary, and leads any negotiations with the EU governments and the Commission. MEPs and political groups compete for these powerful positions, as a rapporteur can usually influence the amendments the European Parliament proposes and hence the eventual shape of the EU law – rather like a ‘sponsor’ of a bill in the U.S. Congress. 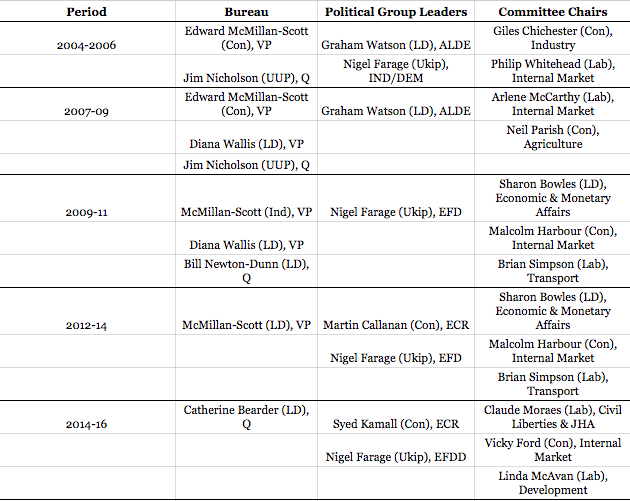 Table 1 shows that British MEPs have held several ‘top offices’ since 2004. Two have been Vice-Presidents, three have been Quaestors, four have been political group leaders, and UK MEPs have chaired seven different committees. Of particular note is that a Brit has chaired the powerful Internal Market committee continuously since 2004 (a critical policy area for the UK). Also, in the current Parliament, Brits chair three key committees: Internal Market and Consumer Protection (Vicky Ford), Civil Liberties and Justice and Home Affairs (Claude Moraes), and (International) Development (Linda McAvan). The other interesting point is that several UK LibDems have held top jobs, despite having fewer MEPs than the Conservatives, Labour and now UKIP. 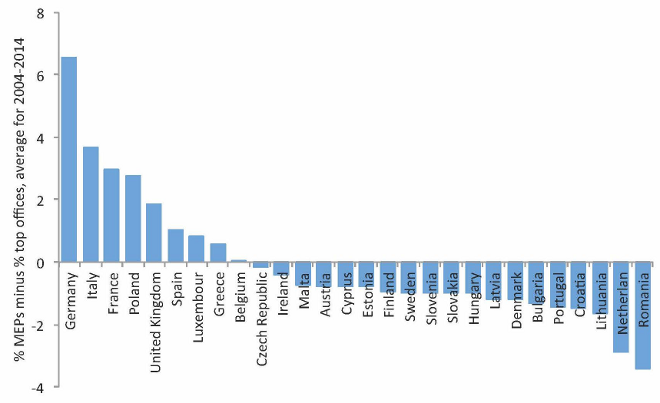 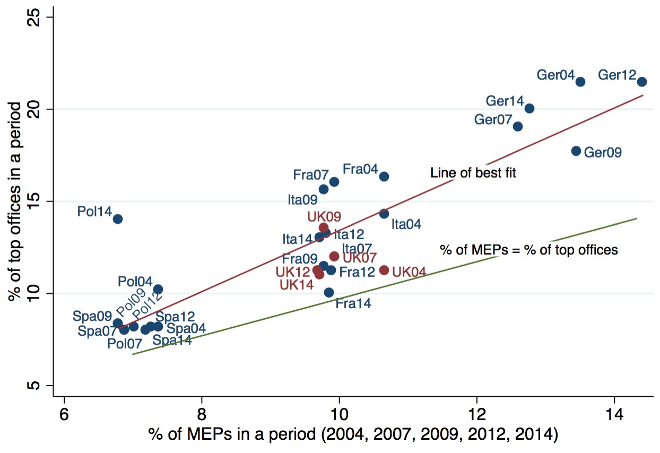 Turning to rapporteurships, Figure 3 shows the proportion of reports relative to the proportion of MEPs from each member state in the 2004-09 and 2009-04 terms. MEPs from the older member states, including the UK, are more likely to win rapporteurships than MEPs from the member states who joined in the 2000s. In fact, UK MEPs (co)authored 224 reports in 2004-09 and 180 in 2009-14. These included reports on important pieces of legislation, such as the EU Directive on Local Loop Unbundling, which liberalised the EU internet service-provider market, and on which Nick Clegg MEP was able to shape the policy in a more pro-consumer direction. In general, in terms of report-writing, UK MEPs were ‘over represented’ in 2004-09 and slightly ‘under represented’ in 2009-14. 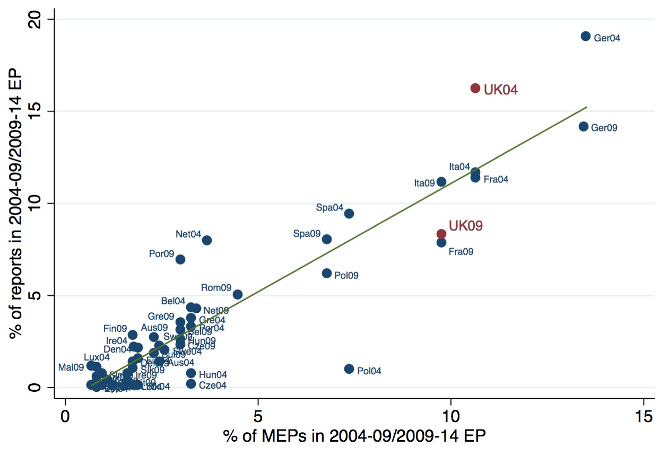 However, not all rapporteurships are of equal value. Authoring a report on a piece of legislation where the European Parliament has full legislative power, is clearly more important than authoring a report on an issue on which the Parliament has little power. As a result, Figure 4 shows the pattern for reports on ‘codecision’ dossiers in 2009-14: on all the legislation on which the European Parliament had equal power to amend and block EU laws as the EU governments in the Council. In this term, when it came to key pieces of EU law, UK MEPs author more reports than the MEPs from every other member state except Germany. 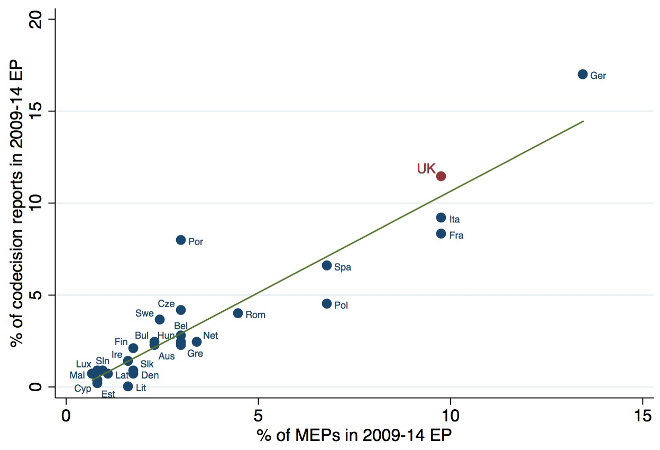 In short, UK MEPs have captured many powerful agenda-setting positions. They have been Vice-Presidents, political group leaders, and chairs of important committees. UK MEPs have also won rapporteurships on key legislation, which has enabled them to shape EU law. Moreover, UK MEPs have not been ‘under-represented’ relative to the MEPs from the other big member states. And all this has been despite the growing number of UKIP MEPs, who have not competed for many key offices or rapporteurships.

Note: This article also appears at The Guardian and UK in a Changing Europe. It gives the views of the authors, and not the position of EUROPP – European Politics and Policy, nor of the London School of Economics. 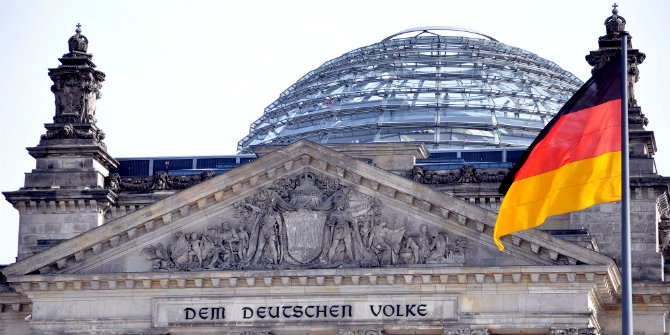 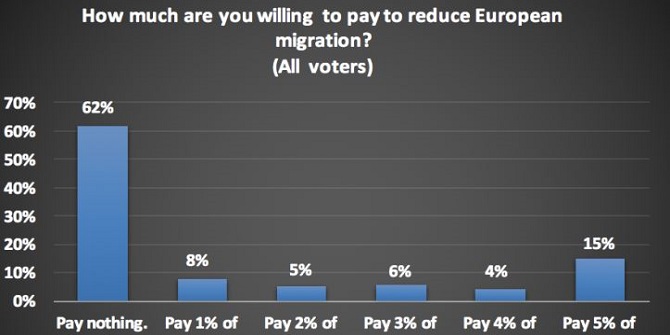