How should mainstream parties react to increasing Euroscepticism among voters? Robert Rohrschneider and Stephen Whitefield argue that the failure of mainstream parties to alter their positions on European integration in light of these shifts in public opinion has left a significant representational gap for extreme anti-integration parties to fill. They notice a difference between western European and eastern European countries, remarking that the latter have better managed to integrate growing scepticism about the EU, although the examples of Hungary and Poland demonstrate that the adoption of Eurosceptic stances is by no means a firewall against extreme politics.

European parties are currently facing a significant strain as they seek to represent increasingly diverse voters. Our previous conclusions on the topic were largely positive: until 2007, parties in western Europe and eastern Europe did a pretty good job of articulating the preferences of citizens. The growth of public Euroscepticism since the financial (and other) crisis in 2007, however, has raised a new representational challenge for Europe’s parties and it is one that mainstream parties, particularly in western Europe, are largely failing to address.

Essentially, mainstream parties have chosen not to shift their positions on European integration to take account of shifts in public opinion. They have thereby left a substantial representational opening for extreme anti-integration parties to take up. Figure 1 shows that mainstream parties stayed largely positive about integration between 2007 and 2013, whereas extreme parties (i.e., those at either the left or right ideological extremes) even more clearly oppose the EU by 2013. Note that even though extremist parties, especially in western Europe, were already very sceptical in 2007, they have become significantly more critical of the EU by 2013. In contrast, mainstream parties sustained their support for Europe during this time. We observe a comparable development in central and eastern Europe, though in more muted form. 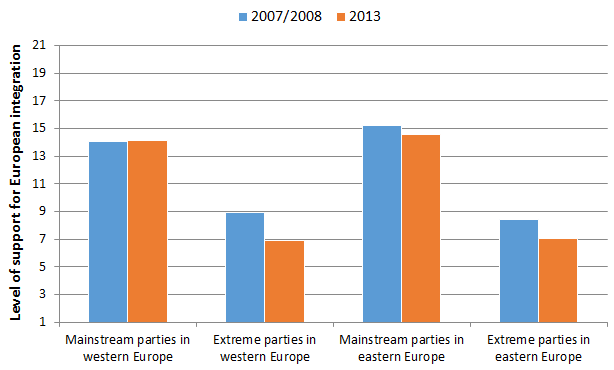 Note: The chart shows mean scores on an additive three-item scale. A score of 21 indicates ‘strong support’ for European integration, while a score of 1 indicates ‘strong opposition’. The western European parties have figures for 2008 and 2013, while the eastern European parties’ figures refer to 2007 and 2013. For more information on how parties are categorised, see the authors’ recent article in European Union Politics

Why then have mainstream parties sustained their pro-EU stances? After all, should they not have incentives to pick up and maintain votes by becoming more critical of integration? It seems that this ‘Downsian’ logic has not played out in practice. We think this is a consequence of two interrelated dynamics that result from the relatively weak ‘integration of integration’ into the main lines of political competition among parties, especially in western Europe. Eastern Europe is different but in a way that starkly highlights our findings.

As a result of the historical consensus over integration and their policy behaviour throughout the crisis, governing parties in particular are reputationally linked to integration in the public mind. By contrast, extreme parties, likely for ideological but also strategic reasons, have been seeking to build their support by taking up issues like integration where they can establish ownership, given mainstream parties rarely offer a critical choice on such issues. This will often entail taking extreme positions to highlight their difference from the mainstream.

What is the result of these reputational and strategic considerations when integration goes wrong in the public mind? Mainstream parties face a quandary. On the one hand, they want to continue to fight elections on the old lines of division where they offer to voters well-rehearsed policy options. On the other, they fear that shifting their stances to a more Eurosceptic position may well only enhance the credibility of anti-integration parties who have come to ‘own’ these issues. As a result, at least until now, they have generally decided to maintain the status quo and hope that the old divisions will trump the new ones in the eyes of voters. Unfortunately for them, and perhaps the European project, the rising salience of integration in the public mind has meant that their strategy has largely failed.

David Cameron’s hope of ‘shooting UKIP’s fox’ by offering a referendum on EU membership strikes us as an exception to the mainstream strategy that proves the rule: by shifting in a sceptical direction, the Conservative Party did little to dampen the rise of UKIP. Only the huge disproportionality of the UK electoral system prevented major UKIP gains in the last general election. And of course, the concession by Cameron to sceptical opinion means that we have a very uncertain referendum on EU membership to look forward to.

Extreme parties, however, display a different but entirely intelligible logic of competition. As our findings show, faced by rising public scepticism, anti-integration parties have become even more anti-integration than they already were at the outset of the crisis. Those that have survived over the last few years are much more sceptical than they were previously. And new sceptical entrants are the most sceptical of all. This makes sense in light of expectations of party competition: as the issue becomes more salient, and mainstream parties only offer a pro-European choice, new parties competing on the issue appeal to voters by offering a clear stance against the EU.

Parties in post-communist EU countries, however, have better integrated growing scepticism about the EU into their platforms. European integration issues in post-communist democracies have been a much stronger presence in party competition since the emergence of democratic politics in the 1990s, in large part because a return to democracy and the market also meant a return to Europe. This has meant that mainstream eastern European parties have always ‘integrated integration’ into their appeals and so the issue has not been left purely to a niche of extreme anti-integration parties.

This has meant that mainstream eastern European parties have been more willing than their western European counterparts to take up Euroscepticism after the crisis. But, the fact that eastern European party competition operates within a different dynamic may not be much of a firewall against extreme politics, as the cases of Fidesz in Hungary and Law and Justice in Poland amply demonstrate.

We find this worrying for a number of reasons. First, because we believe that European integration in some form is of great importance and finding common solutions to Europe’s problems will be made much more difficult if only extreme anti-integration parties represent voters’ concerns. Second, because we note that extreme anti-integration parties tend to be extreme on many other issues as well, particularly on connected questions of cultural and migration politics. Their entry into the electoral arena through their representation of scepticism about integration brings much more troublesome baggage to politics.

Note: This article gives the views of the author, and not the position of EUROPP – European Politics and Policy, nor of the London School of Economics. To read more about the research underpinning this post, read the authors’ recent article in European Union Politics.