How do economic platforms interact with support for European integration? Harmen van der Veer and Simon Otjes write that the dynamics within the European Parliament have undergone a shift since the beginning of the Eurozone crisis. Whereas in previous periods the key divide in the Parliament centred on left/right issues, opposition to European integration has now become intertwined with opposition to austerity policies. As such it is now difficult for parties to successfully articulate an anti-austerity platform while also supporting further integration.

In order to tame the Eurozone sovereign debt crisis, the European Union has adopted a policy of reforms, austerity and budget cuts in Eurozone states, coupled with stronger EU sanctions for countries that do not adhere to this policy. Therefore, it has become increasingly difficult for political parties to pursue an economic agenda that deviates from these fiscal norms without questioning EU membership.

Pro-European parties of the left and right can only place themselves on the pro-austerity side of the economic spectrum, which is opposed by both the Eurosceptic left and right. Results of a recent study we have conducted on European Parliament (EP) voting show that in the Parliament voting patterns on economic issues increasingly follow a pro-/anti-EU dimension while the importance of the left/right dimension for voting on economic issues has decreased.

In the past five years the European Union has created new institutions to combat the European sovereign debt crisis: it created bail-out funds such as the European Stability Mechanism to help debt-ridden member states, but also the Fiscal Compact to prevent future crises of this kind. This included stronger sanctions for Eurozone states that spend more than what is allowed under EU rules. These new institutions constitute an expansion of the powers of the EU at the cost of those of the member states and, at the same time, commit all Eurozone states to austerity policies.

In the European Parliament, which was involved in the debates on these issues and related measures, the political decision-making could potentially have followed two dimensions: a traditional left/right dimension, and a pro-/anti-European dimension. First, the Eurozone crisis is at its core an economic crisis. One may therefore expect that the political conflict about the solutions for the crisis divide the traditional left and right. The left would demand more government investments in order to ensure employment and increase growth, while the right would argue for austerity measures, budget cuts and welfare state reforms. And indeed many saw the return of appeals to left-leaning intellectuals such as Marx and Keynes in the public debate after the crisis.

Second, the solutions to the Eurozone crisis also have a strong European integration component. Pro-European integration parties could embrace the solutions for the crisis hammered out by the European Council and the Commission, while Eurosceptic parties oppose the expansion of the responsibilities of the European Union. The pro/anti dynamic that until now has mainly characterised debates about the institutional design of the Union may have crept into debates about economic issues, when the pro-European left and right accept the logic of austerity and vote in favour of stronger sanctions for fiscal discipline in the EU, while Eurosceptic parties from the left and right seek to protect Europe’s welfare states from interference from Brussels.

Actual conflict in the European Parliament

In practice, how have the dynamics in the European Parliament changed since the beginning of the Eurozone crisis? Did parties fight a ‘state-versus-market’ battle, or has the conflict revolved around whether or not European integration should be extended?

Existing research has shown that much of the political conflict in the EP revolves around the role of government in the economy, with the left being in favour of a bigger role than the right. Conflict over expanding the EU’s power has been only a minor division. Our research, however, shows that both the left-right and the pro/anti-EU dimension matter when it comes to European Parliament voting on economic issues.

Our key finding is that the relative importance of these two dimensions has shifted when comparing the sixth parliamentary term (2004-2009) with the seventh (2009-2014). As shown in the figure below, the division between pro and anti-European parties has become more important in structuring voting behaviour in the European Parliament while the division between left and right-wing parties has declined. This suggests that the austerity policies proposed by the European institutions were not so much opposed by the traditional left, but rather by Eurosceptic parties of the left and the right; pro-European parties of the left accepted austerity in order to save the European project.

Figure: Importance of left/right and pro/anti-integration dimensions in the 2004-09 (dark grey) and 2009-14 (light grey) European Parliaments 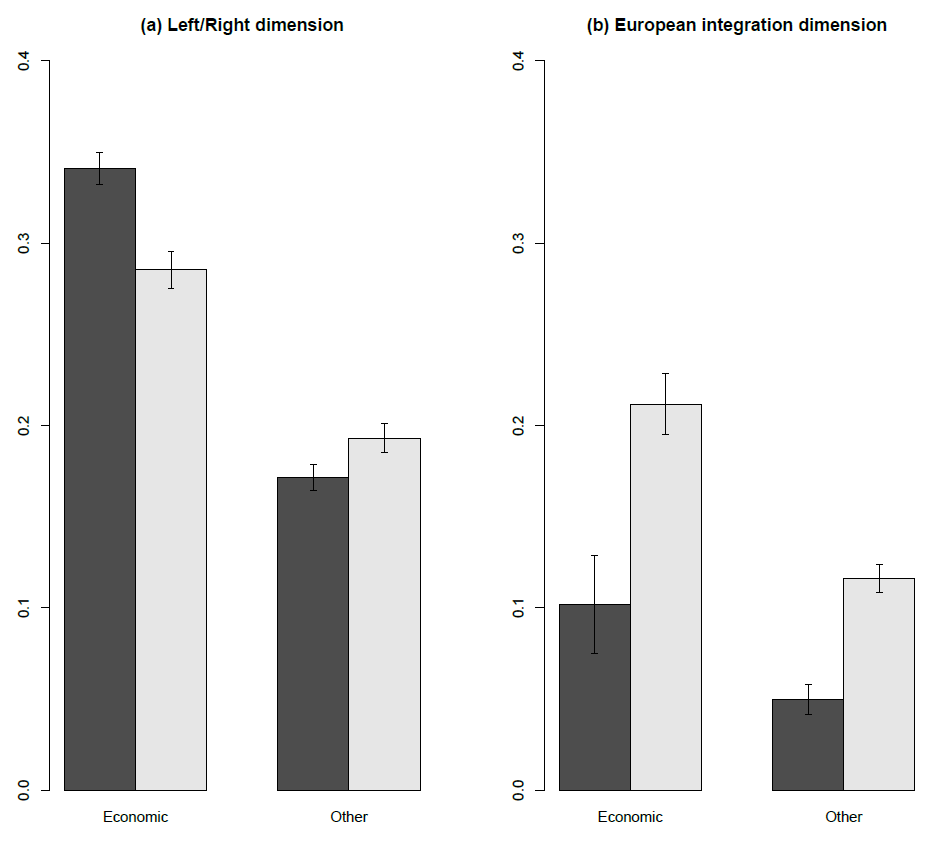 Note: The graph gives the importance of the left-right dimension and the European integration dimension. The higher the bars, the more important the specific dimension is: each bar gives the difference between the most left-wing and the most right-wing MEPs (and most pro-integration and most anti-integration MEPs). Dark grey bars are for the period 2004-2009 (EP 6), light grey bars for the period 2009-2014 (EP 7). As can be seen, the EU integration dimension has become more important for all votes, but especially so for economic votes, while the left-right dimension has become somewhat less important.

Furthermore, our research shows that European integration has a marked impact on the positions parties can take and therefore on the choices voters can make. The focus of the European institutions on fiscal responsibility limit the ability of political parties in the Eurozone to consider alternatives types of budgetary policy (other than austerity) without contesting the issue of Eurozone membership. Increasingly, voters are offered a package deal: they can either choose national sovereignty to pursue expansive budgetary policies or a combination of austerity and integration.

Can only Eurosceptics oppose austerity?

At the moment, the political reality is that pro-European parties vote in favour of austerity and Eurosceptic parties vote against austerity. However, it should not be taken as a ‘natural law’ that opposing austerity and Euroscepticism go hand in hand. Take for example Yanis Varoufakis’ attempt at forming the DiEM movement, which wants to commit Europe “into a full-fledged democracy with a sovereign parliament” while voicing strong opposition to austerity. Whether its federalist anti-austerity positions are politically viable depends on whether such a movement will be able to tackle two big hurdles in particular.

First, will it be able to mobilise voters in European as well as national elections all over Europe? Second, there is the issue of changing the daily politics of the European Parliament: programmatically, the Party of European Socialists and the European Green Party combine left-of-centre and pro-European policy positions but when faced with a vote between risking the dissolution of the Eurozone or austerity policies these parties have chosen the lesser of the two evils. And, indeed, there is nothing unusual in this: even Varoufakis’ former Syriza allies in Greece have opted to put their countries’ membership of the Eurozone above their opposition to austerity.

Note: This article gives the views of the authors, and not the position of EUROPP – European Politics and Policy, nor of the London School of Economics. For more on this topic, see the authors’ recent article in European Union Politics. Featured image: anti-austerity protest in Athens, 2011 (Credits: Kotsolis). 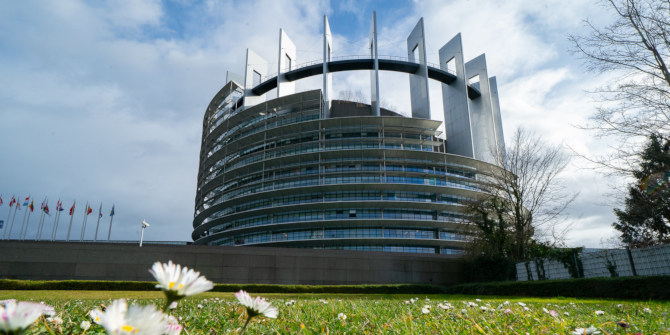