Populist voters are often assumed to be driven by anger or disillusionment with the political system. But does this overlook the possibility that many citizens simply believe populist policies would benefit society? Drawing on a study of the French gilets jaunes, Frédéric Gonthier and Tristan Guerra explain that concerns about wider society have a major impact on the choices populist voters make at the ballot box.

Populist voters have long been viewed as driven by anger toward elites and the political system. With the mainstreaming of populist parties and the resurgence of populist social movements across Europe, a new generation of studies is now devoting more attention to the notion that populist voters can also be motivated by concerns about wider society.

Populist voters are, in particular, highly supportive of institutional reforms on which populist leaders have raised awareness when competing on democratic issues with mainstream parties. This is notably the case with democratic innovations favouring direct democracy, like referendums. Such a concern is due to the fact that populist voters are not only worried about their own personal situation but also by the state of society at large.

In a new study, we expand on this emerging literature by showing that populist support for referendums also translates into voting choice. We focus on the populist French gilets jaunes movement, whose core demands included the establishment of so called ‘citizens’ initiative referendums’, through which citizens would be able to dismiss elected representatives, amend the constitution, make legislative proposals, and oppose government policies.

Although the gilets jaunes initially emerged in opposition to a rise in fuel taxes, citizens’ initiative referendums ultimately became their main demand. These referendums can be seen as a reflection of populism because they are built on both people-centric and anti-elitist principles. Pushing for these referendums also cemented the movement’s unity by replacing the various and sometimes conflicting demands of the gilets jaunes with a simple and inclusive policy that could bring people together. By the same token, it no doubt helped subsume previous subgroup identities and enhance a sense of belonging within the community.

The voting choices of the gilets jaunes make for an interesting case study for our purposes because their supporters should be torn between backing candidates that either share their background, have similar political ideologies, or support the establishment of citizens’ initiative referendums. To resolve this, we conducted a conjoint experiment on a sample of 2,743 protesters between December 2018 and March 2019.

We found that candidates standing up for policy issues brought to the forefront by the gilets jaunes – such as an increase in the minimum wage or reinstatement of the solidarity tax on wealth – garnered more support than candidates who were similar to protesters in terms of their social background, or who signalled their ideological proximity by means of anti-elite statements. We also found that candidates supporting citizens’ initiative referendums were far more likely to be endorsed than alternative candidates, as illustrated by the magnitude of the estimates in Figure 1. 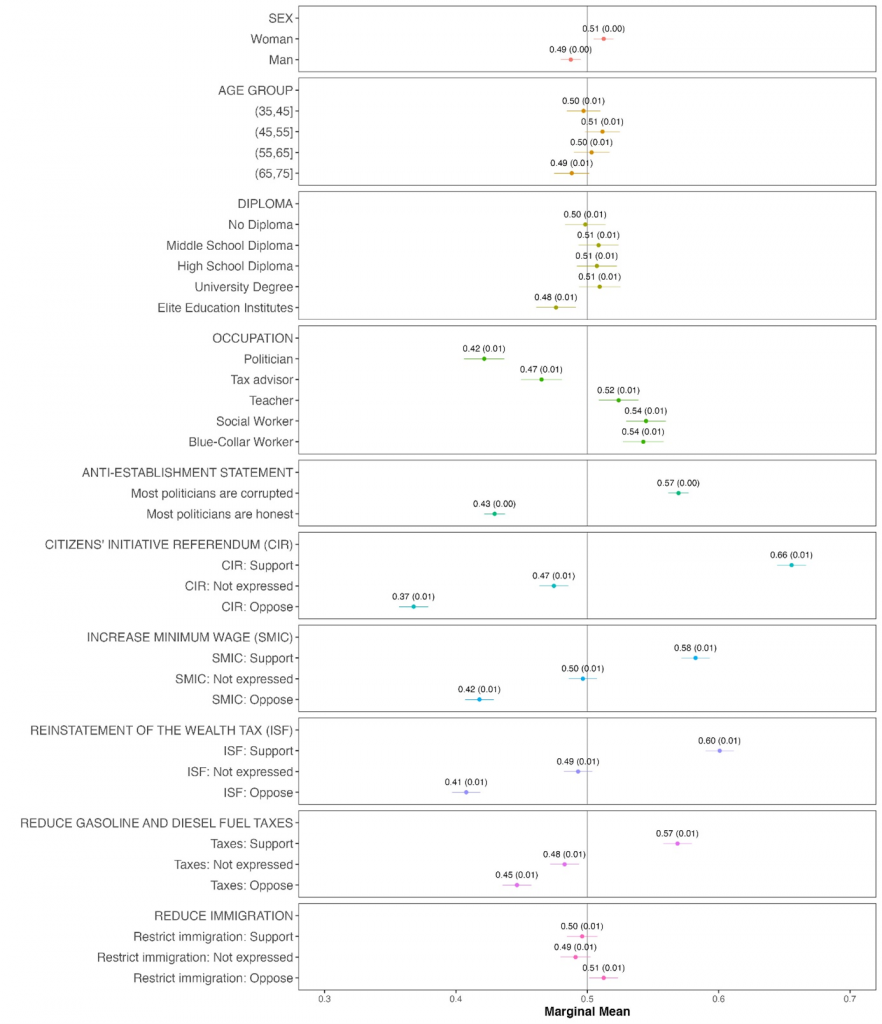 Note: The figure shows how features of candidates affect the likelihood that they will be supported by members of the gilets jaunes. Estimates to the right of the grey line (i.e., with a value above the 0.5 threshold) indicate that a given feature increases candidate support, while estimates to the left indicate a greater chance of rejection.

In sharp contrast to the often-negative image of populist motivations, our research therefore suggests that policy measures enhancing direct democracy may appeal to a populist electorate and channel their discontent. In particular, congruency between people-centric attitudes and referendums appears to be a key route for populist citizens to arrive at their vote choice, even when competing with other core populist appeals such as anti-elitism.

From roundabouts to ballots

Our study echoes the results of the 2022 French presidential election. Even though the gilets jaunes were unsuccessful in getting their own candidates elected, and citizens’ initiative referendums failed to make it to the top of the agenda, candidates that expressed the strongest support for citizens’ initiative referendums, such as Jean-Luc Mélenchon and Marine Le Pen, improved their electoral performance between 2017 and 2022.

Most interestingly, Jean Lassalle, the presidential candidate whose referendum proposals were ranked first by the associations advocating for citizens’ initiative referendums, received a significant boost of around 666,000 votes, finishing above the candidates from the French Communist Party and the Socialist Party.

Institutional issues, such as citizens’ initiative referendums, also gained in salience during the run-off election between Marine Le Pen and Emmanuel Macron. Le Pen even pledged to start a ‘referendum revolution’ to bridge the democratic divide and mobilise disillusioned populist voters against Macron. Taking up the issue of citizens’ initiative referendums was obviously not enough to get her elected, but it nevertheless energised her political campaign and brought populist protesters back to the polls.

Note: This article gives the views of the authors, not the position of EUROPP – European Politics and Policy or the London School of Economics. Featured image credit: ev on Unsplash

Tristan Guerra is a PhD Candidate in Political Science at the School of Political Studies of University Grenoble Alpes, Pacte-CNRS.

Exploring the medieval roots of democracy and state building in Europe