After the three turbulent weeks that followed the EU referendum, Theresa May has taken over from David Cameron as the new British Prime Minister and unveiled her first appointments: Philip Hammond as Chancellor of the Exchequer, Boris Johnson as Foreign Secretary, and David Davis at the newly established post of Secretary for Brexit. Simon Usherwood assesses where to next.

Another day, another upheaval in British politics. In the 21 days since the EU referendum, we’ve had more changes of more consequence than in any time since the second world war. All very grand to say that, but where are we going with all this?

Until yesterday, it was very hard to say, precisely because so much was up in the air. However, with Theresa May’s installation as Prime Minister and his first round of senior appointments to her Cabinet we now have a bit more of a clue. The starting point is that there is no Tory split, and there is little chance of one any time soon. With the speedy and painless removal of Cameron and Osborne, May has led the pragmatists that make up the bulk of the parliamentary party over to a Brexiting position and brought in the more genuinely sceptic into some positions of consequence. We can take the comparison with Labour as the most instructive one here.

May is also trying to not be overly-defined by Brexit – to listen to her speech outside Number 10 last night, it was only a part of her bigger project to tackle social injustices – and so she has taken several steps to try and achieve this. The first is to ensure Leavers got the Brexit briefs. David Davis will head up the new department running the negotiations with the EU27, while Liam Fox takes on the establishment of new trading links with the rest of the world. This makes it much harder for critics to say May is backsliding in her approach, but it also ring-fences Brexit so that other ministers have half a chance to get on with their own projects. That’s a sensible move, if an optimistic one: as Brexit proceeds, it’s clear that it will touch (or, more accurately, go to the heart of) many areas of public policy, so May will find herself arbitrating more and more between competing dynamics.

Secondly, she’s played the distraction card, early and hard. It would be fair to say that in the round of interviews I’ve done since last night, the main topic has been Boris Johnson. I’ve been asked why he got appointed, was he any good, and was it true he ruffles his hair to make it look even more dishevelled than it seems. Let’s tackle the first two elements of this.

Johnson has been brought in close to May by his selection as Foreign Secretary. He was clearly as shocked as everyone else by the decision, because he’d worked out the consequences. Cast out by his failure to contend the Tory leadership, he looked like toast, destined for a career on TV chat shows. But May has taken the emblematic Brexiteer and stuck him in a position that plays to his strengths, while also limiting his capacity to cause trouble, either for the UK or for May.

It’s fair to say that the past couple of decades have seen a considerable down-grading of the status of foreign ministers, especially in Europe. Prime Ministers and Presidents have become much more engaged in international diplomacy (think of the EU, but also the G7 or G20): at the same time, the intrusion of international cooperation into the full spectrum of public policy has meant other ministers also are taking more of a role. Consequently, foreign ministers’ traditional gate-keeping role has shrunk considerably. They now do some coordination, manage a centre of diplomatic expertise and sell their country around the world.

Seen in that light, Johnson is ideal as Foreign Secretary: charismatic, charming, intelligent, multilingual. Yes, he’s got some apologies to make, but as the UK’s salesman, he’ll do a stand-up job. Moreover, recall that he’ll be a Foreign Secretary deprived of the two key tasks he might have done: re-forming the UK’s relationship with the EU, and setting up new trading arrangements with everyone else. A man who’ll be spending much of his time on a plane to press the flesh is also a man with less energy and less opportunity for plotting. And ultimately, if he’s no good at his job, he’ll not be able to blame anyone else: it’s not a push to imagine May say, more in sorrow than anger, that Johnson is simply not up to the job and she’ll have to move him on (and out).

So far, then, so clever. Unite the party, sell potential opponents a dummy [sic], contain Brexit and generally make a good fist of things. What could go wrong? Plenty.

Firstly, we still lack a clear timetable on Article 50 notification. Logically, this will still be in the autumn, when the new government is a bit clearer about things. The EU27 will wait until then too, because they have process and substance debates to settle themselves. But if we get to October without a firm date for notification, then things get much harder for May. The EU27 will be very unhappy (but will have to wait), markets will start making waves, and Brexiteers will start wondering what’s going on. This said, it’s hard to see this being an issue, as May looks to be very firmly pursuing Brexit, albeit on her timetable and terms. It’d be surprising if we don’t have some indication in the next week on this.

Secondly, there’s the containment issue mentioned above. Brexit is almost inevitably going to eat up much government time and effort, both on the big questions and the fine print. Even if Article 50 is essentially a process of the UK deciding whether to accept the EU27’s offer – rather than a negotiation of equals – there’s still lots of scope for disagreement and surprise.

And this leads to the third element. As decisions and choices are made, some people are going to be unhappy. The Brexit coalition was always far too broad to be satisfied by any given deal, so May has to decide who she’s going to annoy. Right now, that looks like being the harder end of the spectrum, who reject the EEA/Norwegian style model that May seems to favour. That’s not only an issue with the public, but also within the party. Recall that there is a very small majority, so it only takes a small number of rebels to make May’s life very hard, especially because she doesn’t look like someone going for a snap election.

This is the final paradox. An autumn election would be a distraction, but it would strengthen May’s personal mandate and muzzle Tory critics much more (both through the manifesto commitments and the likely increase in Tory majority). Unfortunately, this is a card she can best play now: if she waits until things look more tricky, then the benefit is likely to be much smaller. If the past three weeks have been unsettled, then you shouldn’t hold out for a quiet summer.

Note: A version of this article was originally posted at Politics @ Surrey and it gives the views of the author, and not the position of EUROPP – European Politics and Policy, nor of the London School of Economics. 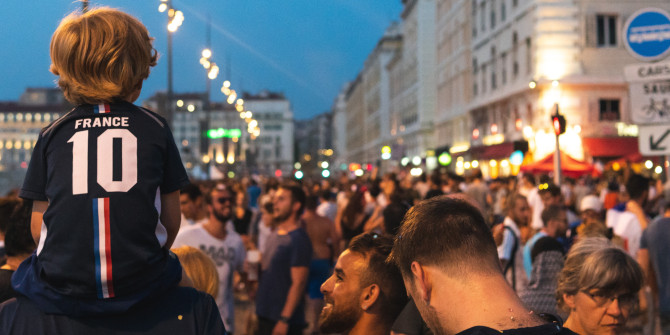 With a coalition agreement finally reached, Angela Merkel’s grand coalition is now in the hands of SPD members