What factors affect the percentage of women who participate in labour markets across Europe? Sonja Avlijas presents evidence from Eastern Europe, noting that while many countries in the region had high female employment rates during the socialist period, this picture has become much more varied since the transition away from socialism in the 1990s. She suggests that the experience of Eastern Europe highlights why policymakers should place greater emphasis on understanding how economic growth strategies affect women’s economic opportunities.

Eastern European countries had the highest female employment rates in the world during the socialist period. While the transition to capitalism had an initially negative impact on labour markets across the region, by the end of the transition some of these countries managed to recover their female employment to the high levels they had experienced prior to 1989 (see the Baltic region in the figure below). However, others continued to go in the ‘wrong’ direction, and in some cases even converged towards low female employment rates that have traditionally been a feature of the Mediterranean states (see Croatia, Hungary and Macedonia in the figure below). 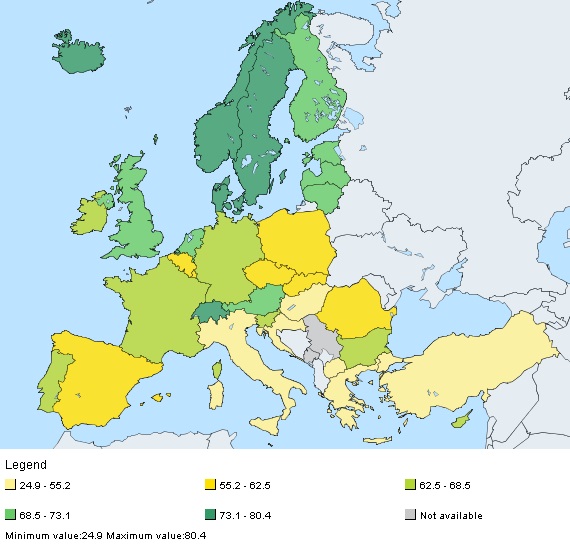 In a recent study, I show that these countries’ approaches to managing economic growth have had unintended consequences for female employment rates. In other words, the structure of a country’s economy and government policies that shape it matter for women, so job creation is not a gender-neutral process. My theoretical propositions and empirical findings support the argument made in previous work by Jane Humphries and Carmen Sarasúa that women work when they have the opportunity to do so, i.e. when jobs are available.

My argument builds on the framework of capitalist diversity in Eastern Europe offered by Dorothee Bohle and Béla Geskovits, who show that Eastern European countries embarked on different trajectories of capitalist development – while some pursued industrial upgrading, others focused on the services sector oriented economic liberalisation. I map two trajectories of female employment in Eastern Europe – a vicious cycle – based on the pursuit of industrial upgrading and heavily supported by the government-led industrial policy, and a virtuous cycle – based on government-led social investment into education and development of knowledge-intensive services.

The vicious cycle of female employment unravels in the context of industrial upgrading driven by foreign direct investment (FDI). First of all, the upgrading lead to a defeminisation of manufacturing because female labour-intensive sectors are not upgraded. Furthermore, the upgrading absorbs the budgetary resources that could have been used for educational reform and formation of general skills which are useful in the service economy. This lack of educational reform impedes the development of knowledge-intensive services, which would have been more conducive to the generation of female employment.

The virtuous cycle of female employment, on the other hand, occurs in Eastern European countries that turn to reforming their educational sector towards general skills and expansion of tertiary education, with the aim of transforming themselves into knowledge economies. Such a transformation requires an active social investment state and growth of knowledge-intensive public and private sector employment, which provides greater employment opportunities for women.

My study goes against the conventional wisdom on the drivers of female employment, which has it that work-and-life balance and the policies that support it should determine female employment outcomes. The economic argument is that market forces during post-socialist transition have affected women’s incentives to work through mechanisms such as the rising cost of childcare and higher husband wages. Nevertheless, the growing cost of childcare does not explain the observed cross-country variation in female employment across Eastern Europe, since childcare costs and wages grew across the region.

In addition, looking at the relationship between female employment and spending on childcare in Eastern Europe, previous studies have found that the level of childcare usage, enrolment and public investment is actually very low across the region. For example, while Estonia has one of the highest female labour force participation rates in the EU, European Commission recommendations regarding Estonia’s implementation of the EU’s Europe 2020 strategy highlight access to childcare as a particular problem. Estonia stands out as the Eastern European country with the highest number of births per woman and the highest female employment at the end of the observed period. Finally, there are no substantial differences in cultural attitudes towards female work among these countries that could account for the observed variation.

Nevertheless, EU-level policy recommendations that have been associated with the Lisbon Strategy during the 2000s and with Europe 2020 from 2010 onwards have almost exclusively focused on work-life reconciliation policies as convenient micro-level solutions to structural problems, such as low economic activation of women. The 2011 country EC recommendations for most Eastern European countries, which lag behind the EU average, focused on the expansion of part-time work opportunities and childcare facilities for women.

Recommendations for Hungary went a step further in arguing that generous benefits are keeping women out of labour markets. The over-generosity of benefits, on the other hand, does not seem to be an impediment to female activation in Scandinavia. Only in Bulgaria and Poland is there mention of improving future skills acquisition and training for women as part of the recommendations to boost their employment rates.

In contrast, I identify that economic policies and budgetary decisions that governments adopt produce biases that lead to non-gender-neutral job creation. My work implies that a political shift is needed away from considering women primarily as child-bearers, and towards understanding how macroeconomic strategies affect employment opportunities for women, in the context of occupational segregation between the genders.

My findings also dispel the idea that high female employment in the Baltics is purely market driven and neoliberal. Governments play a substantial role in the production of economic growth, which in turn has consequences for women. Fiscal policies have significant scope for increasing female employment if the right ones are implemented, such as the expansion of tertiary education, the proliferation of general skills and the preservation of public sector employment. The state can preserve skills and create new ones, acting as a stabiliser during turbulence, even in liberal states. These findings have important policy implications due to the recent austerity pressures in Europe, in particular in terms of the size of the public sector in South Eastern Europe.

While advocating the dismantling of the traditional welfare state would be to go too far, in the Eastern European context at least, economic growth oriented policies that push women outside the family realm and give them tools for independence, such as education, may in fact empower them more than passive welfare receipts. Therefore, policy discussions should focus on understanding how economic growth strategies affect women’s economic opportunities. Public social spending should be framed as social infrastructure spending, whose intention is to preserve or create human capital, rather than as a mere cost with no real benefit for the future growth and development of a country.

For more information on this topic, see the author’s recent ‘Europe in Question’ discussion paper

Sonja Avlijas – Sciences Po
Sonja Avlijas is a Postdoctoral Research Fellow at the Laboratory for Interdisciplinary Evaluation of Public Policies – LIEPP at Sciences Po, Paris. She holds a PhD in Political Economy from the LSE’s European Institute and is an editor of the ‘Europe in Question’ Discussion Paper Series.