The Netherlands will hold a general election on 15 March. Ahead of the election, Tom Louwerse takes a comprehensive look at the polling. He writes that the polls suggest a relatively large number of mid-sized parties, each commanding between 5 and 11 per cent support, will gain representation in parliament. If the final result is anything close to the predictions, then a complicated government formation process is highly likely.

Ahead of the Dutch general elections on 15 March, opinion polls point to a divided electorate. The two biggest parties in the polls, the radical right wing populist Freedom Party (PVV) and the right-wing liberal party VVD, command around 20% and 15% of the vote each. This is a very low vote share for the two top contenders, even for Dutch standards. No less than five parties are on or just below 10% of the vote. It is likely that their fortunes will have a great impact on who will form the next government.

Opinion polling in the Netherlands is carried out by five companies, which all use forms of internet-based polling. As their sampling and weighting methods differ, they tend to come up with quite varying poll numbers. For example, support for the junior government coalition partner, the Labour Party, was estimated at 11.2% by I&O research, while in the most recent Ipsos poll it had only 7.4% of the vote. These differences are not random, but structural, which means that there are significant ‘house effects’ in the Dutch polls: some pollsters estimate some parties consistently higher than their competitors.

Here I use the data from the ‘Dutch Polling Indicator’ which pools all of the opinion polls into one estimate. In a way it is an ‘average’ of the polls by assuming that the house effects of pollsters average out. If all pollsters under or overestimate a party, so will the Polling Indicator, but lacking a ‘golden standard’ this probably gives the best picture of the state of party support we can get. 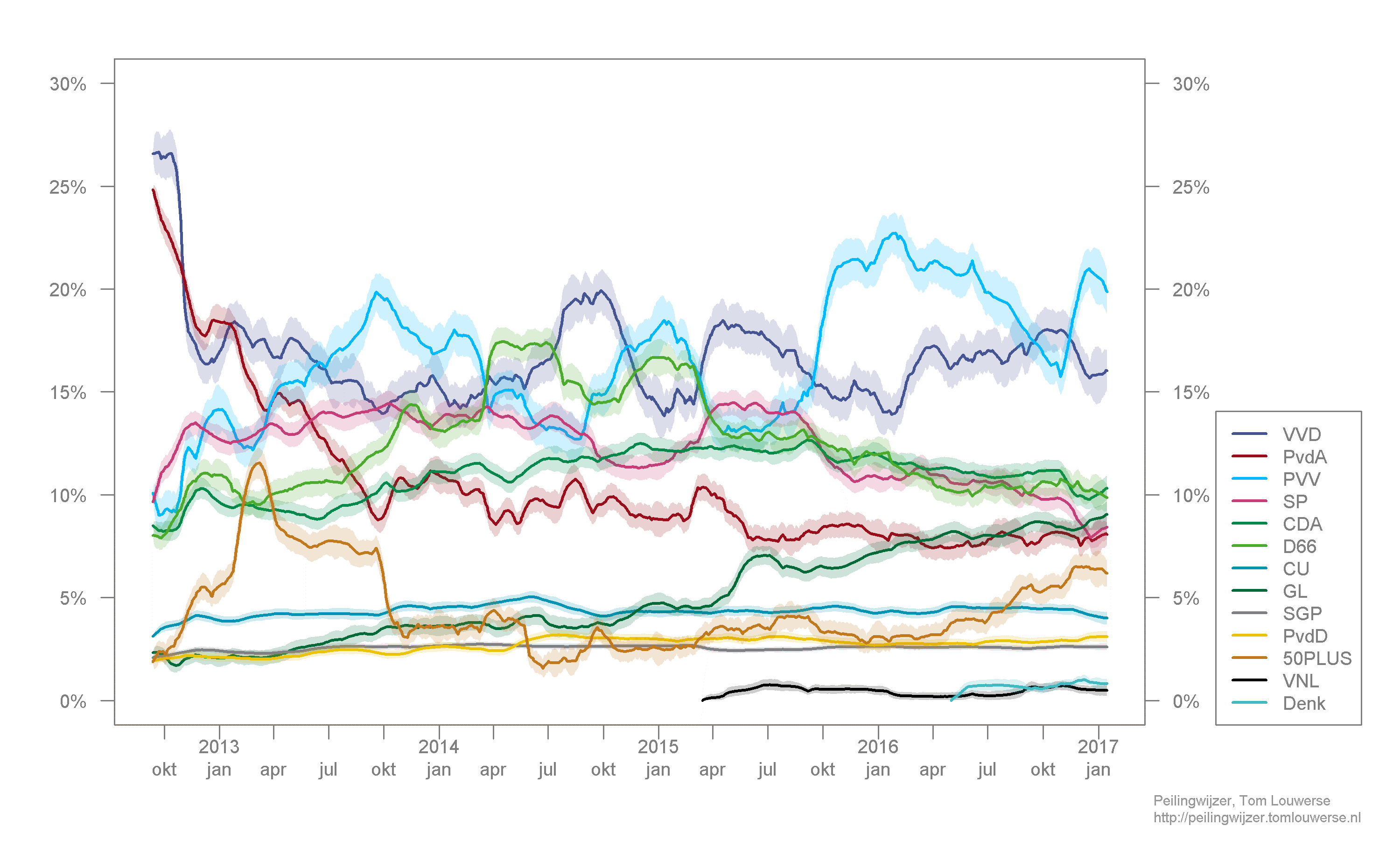 Battle on the right

The radical-right wing Freedom Party (PVV) headed by Geert Wilders is currently leading in the polls. It approximately doubled its size from 10% in the last election to around 20% now. Its support has seen ups and downs over the past parliamentary term. In 2015, support for the party increased substantially during the ‘refugee crisis’, but slowly declined from the start of 2016. The party regained the lead in the polls, however, in November last year, when Wilders stood trial for his discriminatory remarks about Moroccans. In the last week the party lost a little ground, but even if it loses out to the liberal party (VVD) it is likely to at least match their best result ever (15.4% in 2010).

The party of the incumbent prime minister Mark Rutte, the right-wing liberal party VVD, is currently in second place in the polls at around 16%. This is the level the party has been at for most of the term, with some ups and downs along the way. The party still has high hopes of becoming the largest party in the upcoming elections.

While both the PVV and VVD are located on the right of the political spectrum and have cooperated in a minority government led by Rutte between 2010 and 2012 (Rutte-I), the VVD has recently ruled out going into government with the PVV. It seems to fear that some of the VVD’s more traditional voters are concerned about a renewed cooperation with the populist right, which made the party leadership break with its mantra: ‘we do not a priori exclude any party [from government formation]’. Given the strong position of the PVV in an otherwise fragmented electoral landscape, this will likely make government formation a difficult task.

On the left of the political spectrum, the Labour Party (PvdA) is the big loser. Its electoral decline started right after the 2012 elections in which they gained 24.8% of the vote. Within a year that was reduced to under 10% in the polls and it has remained at this relatively low level of support ever since, currently polling around 8%.

The other parties on the left seem unable to profit from this loss. The Socialist Party (SP) is the only opposition party that has not gained support compared to the last election, with the party polling around 8%. The Green Party (GL) is recovering from its poor 2012 showing: from around 2% then to around 9% now. Still, this is only a 7 percentage point increase, while the Labour Party has lost 17%.

Some of these votes seem to be going to the Democrats (D66), a ‘social-liberal’ centre party (currently at 10%), according to an analysis by Ipsos. And parties like 50PLUS (which targets the elderly), CDA and PVV also win over smaller numbers of former PvdA voters. But a sizeable share of 2012 PvdA-voters are now saying they will not vote or do not know who to vote for. Whether they will really stay at home or will eventually decide to vote for the PvdA anyway, might impact the size of the PvdA’s losses.

There is no clear front-runner on the left of the political spectrum. If such a party will emerge in the next few weeks, it might attract some strategic voters who would like to see at least one strong left-wing party that has a good chance of being part of the next government.

Figure 2: Predicted support for individual parties in the 2017 Netherlands election 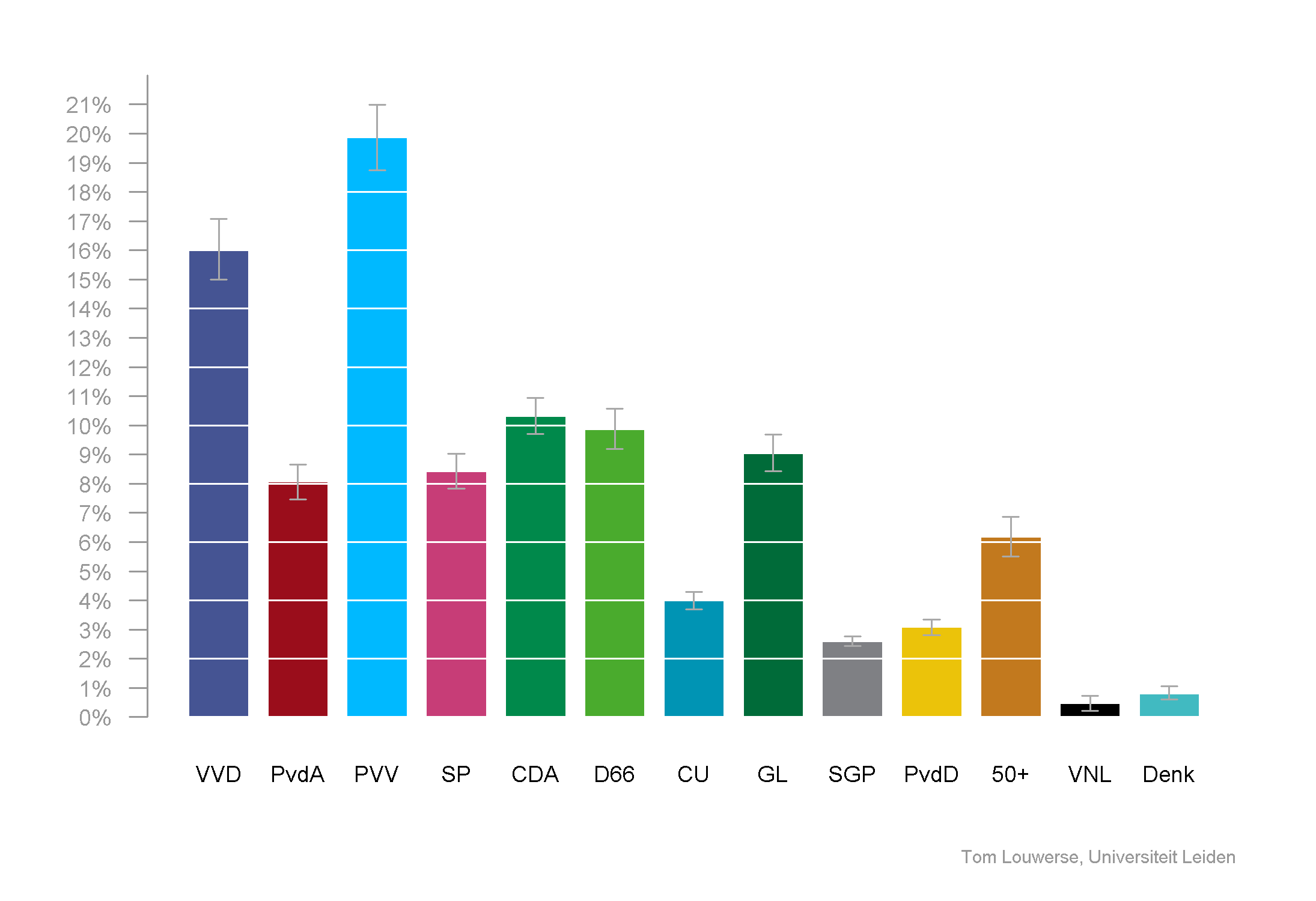 From the ‘big three’ to new, small parties

The third party that used to be one of the traditional ‘big three’, the Christian democrat CDA, has recovered slightly from its disastrous result in 2012 (8.5%), and is currently receiving around 10% support in the Dutch Polling Indicator. This is still a low level of support for a party that used to receive well over 25% of the vote in the 1980s and 2000s. Together, the ‘big three’ are polling only around 35% support; in 1986 the Christian democrats alone won 34.6% and the big three combined received the vote of 85% the electorate.

Among the smaller parties the 50PLUS party (which targets voters over 50 years of age) is polling particularly well, at around 6%. The smaller religious (Christian) parties are relatively stable, while the Party for the Animals shows small gains. Several new parties are competing in the election. While most of them are unlikely to gain representation, there are several more serious contenders, mostly formed by MPs who split off from their parliamentary party in the current parliamentary term. One such party is ‘Denk’, which targets migrant voters (mainly those of Turkish and Moroccan origin). While it is difficult to estimate its electoral potential using online polls because migrant voters are underrepresented in those panels, it seems likely that its current support is at least 1% of the vote (about 1 or 2 parliamentary seats).

There are several contenders targeting dissatisfied voters, particularly on the right of the political spectrum. One such party is ‘For The Netherlands’ (VNL), which is currently polling just below the electoral threshold of 0.67% (1 seat). The ‘Forum for Democracy’ (FvD) has a somewhat more centrist platform and gains a seat in some polls (it is not yet included in the Dutch Polling Indicator because of its low levels of support). And there is also ‘GeenPeil’, which promises to organise membership ballots for all major parliamentary votes and mirror that result in their parliamentary voting behaviour. This is an offshoot from the successful campaign against the EU-Ukraine treaty that was defeated in a (consultative) referendum in April last year.

While there is certainly a lot on offer in the relatively open electoral system of the Netherlands, it would be a mistake to characterise the increase of the small parties as the main threat to political stability. What we see is not so much many small parties, but a relatively large number of mid-sized parties. There are six parties that command between 5% and 11% support; together they represent more than half of the electorate. If the election result is anything close to this, we would expect a complicated government formation process.

Whether he wins or not, Geert Wilders has successfully managed to put Islam at the centre of the Dutch elections