The migration crisis has posed a number of challenges for European countries, but what lessons can be learned from previous experiences with large scale migration? Mikkel Barslund, Matthias Busse, Karolien Lenaerts, Lars Ludolph and Vilde Renman present evidence from a study of the integration of Bosnian refugees in Europe following the Balkan wars in the 1990s. They find that with the right integration policies and labour market conditions, it is possible to achieve a high level of integration among refugees within a short period of time.

In 2015, Europe experienced the largest influx of refugees since the Balkan wars in the early 1990s. While arrivals were down in 2016, the security situation in the Middle East and the instability in North Africa and elsewhere mean that Europe will play host to refugees for the foreseeable future. Quite apart from the considerable humanitarian issues at stake, this commands European countries – both out of self-interest and in the interest of refugees – to facilitate wider societal integration. Labour market integration of newcomers plays a key role in achieving this objective.

The situation in the early 1990s, when over the course of a brief period of time 1.2 million Bosnians fled the country as war refugees and more than half a million sought refuge in Western Europe, was not so different from the situation today. Moreover, there is significant overlap among countries affected by the two refugee waves. Austria, Denmark, Germany, the Netherlands and Sweden all saw a large absolute and relative influx of refugees in both 2015 and between 1992 and 1995, when the bulk of Bosnians arrived in Western Europe (Table 1).

Table 1: Overview of registered refugees from Bosnia and Herzegovina (1992-1995)

In a recent study, we trace the integration experience of Bosnian refugees from the Balkan wars in those five countries to draw lessons for the current wave of refugees. Integration is a slow-moving process. Looking closely at Bosnian refugees enables us to see past immediate integration outcomes and take a longer-term view.

We drew on international published research but, more importantly, also combed through a significant amount of national sources. The five countries also make for a particularly interesting comparison because they differed in important ways when the Bosnians arrived (Figure 1).

Figure 1: Unemployment rates at the time of the Bosnian war 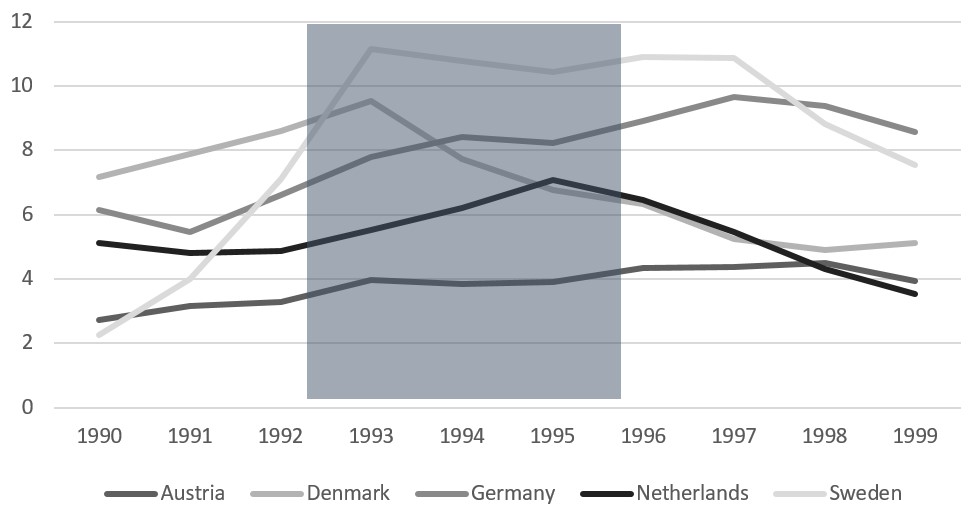 Sweden had just entered what was going to be a prolonged economic crisis. Unemployment was high in Denmark too, but the subsequent path was one of falling unemployment rates and high growth for one decade afterwards. The Netherlands as well as Austria were running at or close to full employment, and Germany was entering the period of being labelled ‘the sick man of Europe’.

This situation was reflected to some extent in the approach to the initial reception of the Bosnian refugees. Bosnian refugees received temporary protection at the time of their arrival in all Western European countries. This was mainly a political compromise. For host countries, it was the only way of dealing with the large influx of refugees without amending their asylum systems or overburdening them. The UNHCR had deeper concerns. The organisation wanted to push the issue of burden-sharing of refugees across Europe. In fact, discussions at the time bear some resemblance to those taking place within the EU today. Temporary protection left the door open to involving those Western countries that had not initially experienced an influx of refugees displaced from the former Yugoslavia. This strategy turned out to be largely unsuccessful. An additional concern was whether granting refugees permanent residency upon arrival would institutionalise the widespread ethnic cleansing going on in parts of Bosnia.

Despite the consensus on provision of initial temporary refuge, there were vast differences in the legal and institutional approach to dealing with the influx of Bosnian refugees. Three broad categories emerged within the selected sample of countries. Sweden granted refugees permanent residency and labour market access shortly after arrival. Austria, Denmark and the Netherlands converted the initial temporary asylum with limited access to labour markets into permanent residency and full access to labour markets after a few years. Finally, Germany never intended to host Bosnian refugees permanently and repatriated the vast majority of them as soon as the war ended. 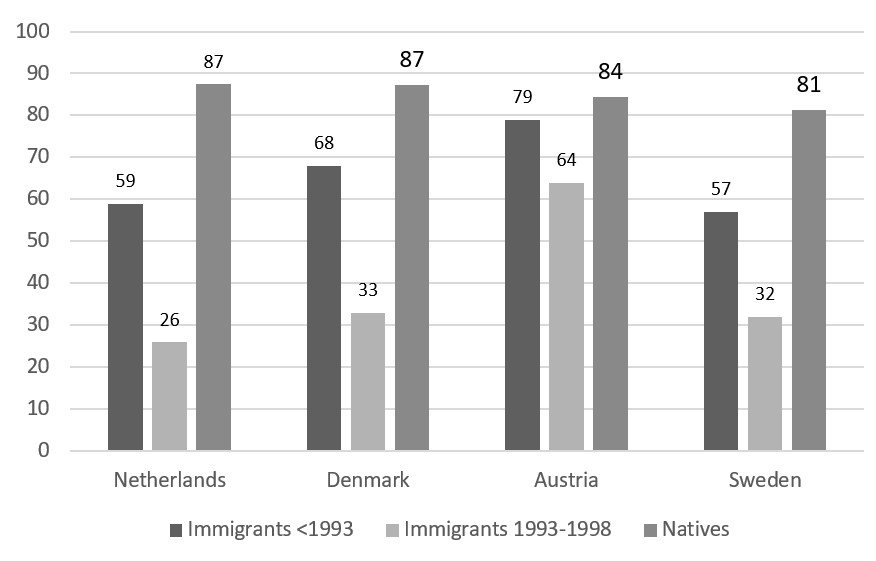 Employment then picked up in all countries, albeit at a different pace. In Austria, medium-term labour market outcomes around ten years after the end of the Bosnian war were already on par with the native-born population. In Denmark, the Netherlands and Sweden, Bosnians still participated significantly less in the labour market and showed higher unemployment rates but the gap to the respective native-born population clearly began to close, in particular for the younger age groups.

However, for three of the four countries the process of integration seems to have been completed within one generation. This is rather fast and it is well worth exploring further the determinants of these positive outcomes, particularly because such a catch-up is not found for other immigrant groups. One important factor in explaining this catch-up could well be the fact that Bosnians were generally better educated than other refugees. There is some evidence from Germany that the same is the case for the recent Syrian refugees.

Overall, our results point to four interesting findings. Under favourable integration policies and labour market conditions, employment rates can reach those of the native population in little more than a decade (the Austrian case). Granting the right to work quickly upon arrival is important, but failure to do so can be overcome over time (Denmark, the Netherlands). Initial unemployment levels in host countries are important for initial labour market integration (the case of Sweden): a finding which is not surprising, but important given the European debate on distribution of refugees. Finally, second-generation Bosnians, or those who arrived at a young age, perform roughly on a par with native-born cohorts. We deem this to be a sign of a completed integration process. 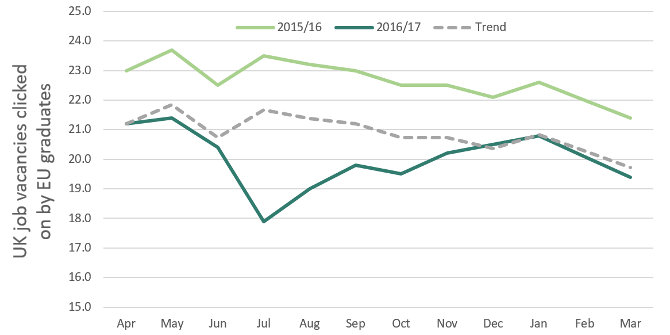