Ethnic minority groups tend to have lower salaries and higher rates of unemployment in European countries, but how can this disparity be addressed through public policy? Licia Cianetti highlights that efforts to tackle the issue across Europe have come to be dominated by ‘trickle down’ approaches which view economic growth and job creation as the ultimate solution. She argues that such approaches are at odds with the evidence on social exclusion and are unlikely to produce genuine change.

All over Europe, members of ethnic minorities are at a considerably higher risk of being unemployed, employed in a low-paid job, and poor. This remains true even allowing for variations among countries and among minorities; it is true for both “new” migrant minorities and those with a longer history of settlement in the country (especially if the group is considered “visible”); and is largely independent of citizenship status and educational attainment.

As a 2007 report by the EU High Level Advisory Group of Experts on the Social Integration of Ethnic Minorities put it, membership of ethnic minority groups is “in most cases a social disadvantage per se”. The financial crisis of 2008 and the austerity policies with which most European governments responded to it are likely to have made the situation worse, as already disadvantaged groups suffered disproportionately from the fallout. This is the grim picture that emerges from the findings of an EU-MIDIS survey, the above-mentioned High Level Advisory Group report, EU Fundamental Rights Agency reports, reports by the European Network Against Racism, studies by the Council of Europe’s Commissioner for Human Rights, and numerous country-specific studies (see for example here, here and here).

All of these studies lament the chronic lack of data on minority socio-economic exclusion that might help inform adequate policies. More targeted data collection will be needed to understand the exact geography of minority socio-economic disadvantage in Europe, including differences between countries, between minorities and within minorities. Nevertheless, all the available evidence points to minority social exclusion as a persistent, Europe-wide problem; so, it is interesting to see what EU institutions have made of it.

The EU minorities agenda in times of crisis

The EU has limited competency in matters of minority integration, which remain for the most part the remit of member states. Nevertheless, the issue of minority socio-economic exclusion has repeatedly come up at EU level. Minority protection and non-discrimination have been the subject of a long list of policy agendas, directives, and reports (also here). Separately, the EU has also developed an agenda for combating social exclusion, starting with a 1989 resolution and continuing with the Lisbon Strategy in 2000 (and the subsequent European Social Agendas) and the Europe 2020 Strategy targets to reduce poverty and social exclusion.

While these can be considered as two separate policy streams, they have both come to recognise that there is a problem with minorities experiencing socio-economic disadvantage. There has been a growing recognition in minority protection policies that minority inclusion has a strong socio-economic dimension; and social inclusion policies have recognised that minorities are particularly vulnerable to socio-economic exclusion. Therefore, over time, certain trends in approaching minority social exclusion (if not a coherent discipline) have emerged at the intersection between these two policy streams.

So, what can all these documents, taken together, tell us about the EU’s approach on minority social exclusion? Rather discouragingly, they show that knowing more about an issue does not necessarily translate into policies that take that knowledge into account. Indeed, reviewing documents issued over the past twenty years, one can see a growing mismatch between evidence and policy. On the one side, increasing evidence was accumulated by EU institutions and agencies that minority social exclusion is a systemic and multidimensional issue; on this basis, the specialised agency tasked with looking into this (the Fundamental Rights Agency) repeatedly called for evidence-based, holistic approaches to exclusion.

On the other side, however, a one-dimensional policy approach became progressively dominant, which sees growth and job creation as the ultimate solution to the problem. This is what in a recent study I call the “trickle-down approach” to minority social inclusion. The approach more or less states that member states should focus on growth and job creation and, provided that adequate non-discrimination provisions are in place, this will automatically result in better minority social inclusion.

This approach is doubly flawed. First of all, it neglects the evidence that minorities in Europe have consistently been at a socio-economic disadvantage, also during periods of growth. And secondly, it does not adequately recognise that anti-discrimination measures cannot by themselves be a solution to minority social exclusion. Non-discrimination mechanisms are very important to avoid situations in which a person from a majority background – all other characteristics being equal – is favoured over a person from a minority background for the mere fact of being part of the majority. However, in the presence of systemic inequalities between majorities and minorities it is highly likely that the person with a minority background will be at a disadvantage on those ‘other characteristics’ as well (for example work experience or educational attainment). More systemic approaches are needed to reduce those underlying inequalities.

The gulf between the growing calls (among others, by the EU Fundamental Rights Agency) for a more evidence-based, multi-dimensional approach to social inclusion that takes into account structural inequalities and the reality of a progressively crystallising ‘trickle down’ approach is remarkable. When I first started looking at this I was expecting the economic crisis of 2008 to have marked some sort of watershed. This however doesn’t seem to have been the case.

Yes, the economic crisis seems to have shifted even more power to the economic arguments and left arguments for more holistic approaches to social inclusion even more cut-off from policy making. But tendencies to look for economic solutions to social problems pre-dated the crisis and were becoming prevalent already in the early 2000s (for an example see the 2004 Kok Report).

The gulf between evidence and policy in the case of minority social exclusion reflects a deeper gulf, which strikes at the core of the European project. It is a product of the disconnect between a rhetoric of values (and the proliferation of documents and agencies dedicated to them) and policy approaches that see those values as secondary to economic aims. In a Communication in 2016 the Commission stated that the EU has ‘legal, moral and economic imperatives’ to work towards ‘a more cohesive society’. If this is to be taken at all seriously, persistent Europe-wide minority social exclusion cannot be treated as marginal to more important issues. It is a central challenge.

Note: This article draws on the author’s recent journal article in the Journal of Common Market Studies. It gives the views of the author, not the position of EUROPP – European Politics and Policy or the London School of Economics. Featured image created using Word Cloud Generator 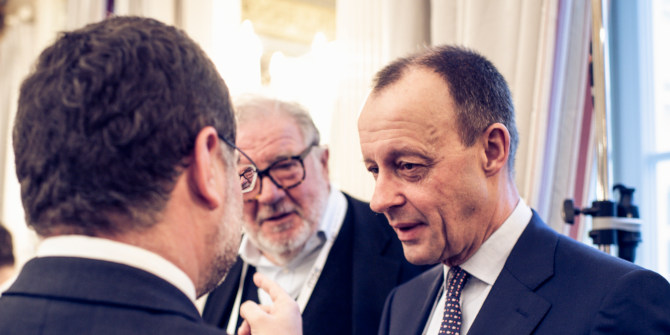 In Romania, electoral reform is taking a backwards step, to the benefit of the ruling parties.