The issue of democratic backsliding in Central and Eastern Europe has received substantial attention in recent years, and many observers are now concerned the coronavirus crisis could exacerbate the problem. Licia Cianetti and Seán Hanley write that while there are genuine threats to democracy in countries like Hungary and Poland, viewing the entire region through the lens of ‘backsliding’ may obscure more than it reveals.

In recent years, Central and Eastern European (CEE) democracies – once hailed as remarkable success stories of democratic transformation – have increasingly attracted media and academic attention as cases of democratic reversal. The consensus is that democracies across the region are in decline and some might be “backsliding” towards semi-authoritarian hybrid regimes or even full authoritarianism. Since the election of illiberal populist governments with absolute parliamentary majorities in Hungary in 2010 and Poland in 2015, these two once model democratisers are now seen as models of democratic backsliding – a trend that some fear may be turbocharged by the ways in which these government have dealt with the coronavirus emergency. 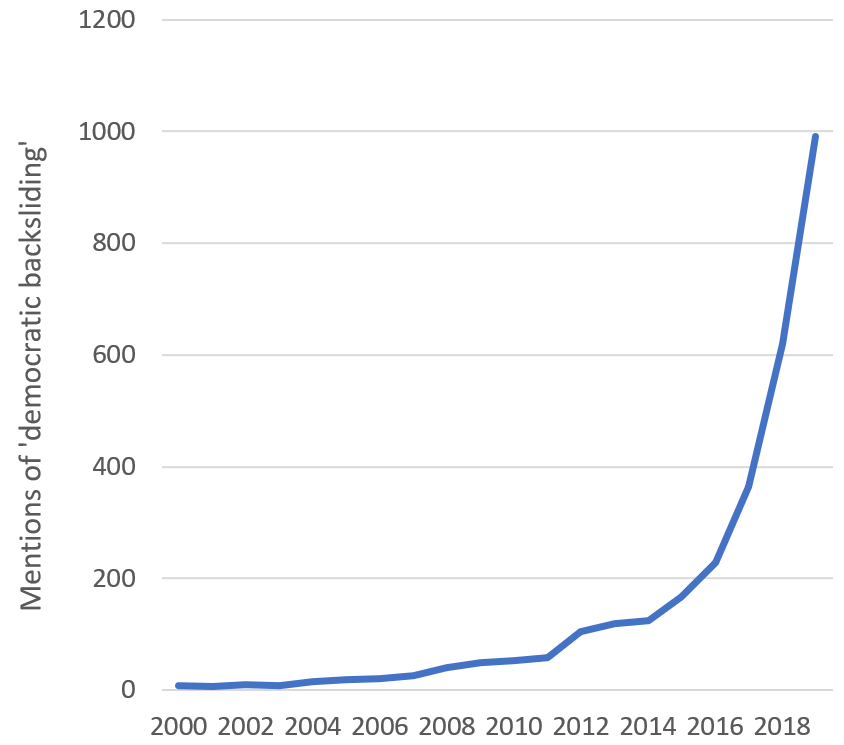 Scholarly interest in the phenomenon of democratic backsliding has exploded in the last decade. Although there has been much dispute both over labels – some scholars prefer terms like ‘democratic erosion’ – and the mix of causes driving the process, the basic contours of democratic backsliding are widely agreed: it is gradual, led by democratically-elected governments (often right-wing populist) and begins with attacks on constitutional checks-and-balances, the judiciary and media pluralism. The dynamic is, as Nancy Bermeo puts it, one of slow but relentless ‘executive aggrandisement’.

Threats to democracy, especially in one-time democratic trailblazers, are serious, and merit serious scrutiny and serious action. There is a risk, however, that reading the entire region through the lenses of backsliding may obscure as much as it reveals. Indeed, the growing pessimistic consensus about democratic regression in Central and Eastern Europe risks repeating – in reverse – some of the same mistakes of the previous optimistic consensus about the region’s democratic progress.

In 2002, Thomas Carothers published a celebrated critique of what he termed the “transition paradigm”. He identified five flawed underlying assumptions that policymakers and democracy promoters held about democratisation. Chief among these were the assumption that a country moving away from authoritarianism was in transition towards democracy and a tendency to think in terms of a linear path with “…options all cast in terms of the speed and direction with which countries move on the path, not in terms of movement that does not conform with the path at all”.

He also questioned an over-focus on elections as watershed moments of democratic change and the underestimation of the importance of having a functioning state in place. Instead of asking “how is the transition going?” he argued that analyses should ask “what is happening politically?” and sketched two common real-life scenarios that “transitioning” states were more likely to settle into: a corrupt, “feckless pluralism” or more authoritarian “dominant power politics”.

Carothers’ famous – and controversial – essay was in places overstated. In hindsight, it reads as a prescient warning not just of the prevalence of ‘hybrid regimes’ manipulating democratic institutions for authoritarian ends in the post-Soviet space and Africa, but also of the weakness of many supposedly consolidated democracies in Central and Eastern Europe. Many bore more than a passing resemblance to Carothers’ scenario of “feckless pluralism”. However, more importantly for the current debate on Central and Eastern European democracies, it serves as a warning that we should not fall into a possible “backsliding paradigm” with flawed assumptions which are a mirror image of the “transition paradigm”.

Through this lens, all democracies in the region become potential backsliders, and their political life is analysed only in terms of the extent (and forms) of their “backsliding”. Any change or event risks ending up being investigated only as a potential signal that a country is backsliding, about to backslide, prone to backsliding, or resilient to backsliding. In other cases, forms of (un) democratic change that may fit “backsliding” only awkwardly such as the Czech Republic have been crammed into a narrative defined by the experiences of Hungary and Poland.

However, while many democracies in Central and Eastern Europe are in aggregate deteriorating, genuine backsliders where democratic fundamentals are in slow motion free fall appear the exception not the rule. Anna Lührmann and Staffan I. Lindberg’s rigorous measurement of “autocratisation episodes” using the V-Dem dataset finds that, of the EU’s 10 CEE member states, only Hungary and Poland have experienced democratic erosion. Two more cases (Serbia and North Macedonia) appear if we add in the four CEE candidate states.

The risk of a “backsliding paradigm”, focusing on a limited number of worst cases, is that it limits our capacity to think about the range of (un) democratic transformation taking place elsewhere in the region. To understand the bulk of CEE cases, where there is neither clear democratic progress nor sharp regress, we are left either with the shaky-looking notion of non-backsliding states being consolidated democracies, or loose and as yet under-theorised, residual categories centring on qualified or low-quality stability, “arrested development” or stagnation.

A paradigm that allows for only three possible directions of travel may blind us to trajectories that don’t follow a linear pattern of advance, stasis or retreat. Even stagnant does not mean immobile with the possibility, for example, of “near misses” or “swerves” into and out of authoritarianism; some archetypically “backsliding” phenomena such as political populism may be deeply ambiguous in their effects, particularly those with a “centrist” anti-corruption orientation such as Slovakia’s new main governing party OL’aNO, while classic bulwarks of democracy such as local civil society can be harnessed to bolster backsliding and illiberalism.

Backsliding through elections only?

The backsliding paradigm is in less danger of reproducing some of the other flaws of its predecessor. Nevertheless, rereading Carothers’ classic essay suggests some additional pitfalls to be avoided.

Elections were seen in the transition paradigm as being central – too central according to Carothers – in cementing democratic breakthroughs. They seem, implicitly, to play a similar watershed role now in the emerging backsliding paradigm, kickstarting the process by putting illiberal or democratic disloyal politicians into power. However, turning Carothers’ thinking around, the election of such politicians does not necessarily lead to backsliding (for example, if institutions are robust and checks and balances too entrenched). At the same time, not all agents of backsliding need be elected politicians – corrupt private interests can capture parties and institutions warping democracy so much that it tips into a special kind of authoritarian hybrid regime – the interpretation Michal Klíma gives of the decline of “standard” West European style party politics in the Czech Republic.

Echoes of the transition paradigm’s over-optimistic underplaying of social-structural determinants can also be found in the emerging reverse transition paradigm. Many accounts of backsliding in Central and Eastern Europe have tended to dwell on the immediate political context such as electoral volatility, polarisation or the rise of populist actors and ideologies; external shocks such as the Great Recession, the refugee crisis or the woes of the Eurozone; or changes in external actors’ policies such as the fading out of the EU’s accession conditionalities. The fact that one-time democratic front-runners such as Hungary and Poland succumbed to backsliding has tended to reinforce the view of backsliding as contagion – driven by the rise of illiberal ideas and unscrupulous elites – that can spread regardless of structural conditions.

This is in some ways unsurprising. The ongoing nature of the process makes the backsliding paradigm prone to “presentism”, over-focusing on a limited selection of current events at the expense of wider historical and social context. When it comes to explanatory factors, many of the usual suspects such as human development, inequality, or ethno-linguistic divisions do, at best, a patchy job in distinguishing CEE backsliders from countries with more variegated patterns of (un)democratic development. The coronavirus crisis stands as a sobering reminder of the reality and power of exogenous shocks. Moreover, as Albert O. Hirschman famously pointed out, some of the most unhelpful paradigms are precisely those which pessimistically see change as blocked off by structural factors.

But any sense that backsliding can happen anywhere and everywhere – and perhaps already is happening – will need to be qualified by a reappraisal of constraining cultural, social and economic limits – a process already underway in scholarly reassessment of the rash of panicky “it could happen here” reactions to the election of Donald Trump, whose authoritarian instincts have damaged but not derailed American democracy, despite the fact that systematic gerrymandering of congressional boundaries and efforts at “voter suppression” make some key elements of US democracy deeply flawed.

The limits of paradigms

No one would deny that processes of democratic backsliding have taken hold in countries such as Hungary and Poland and some other Third Wave democracies beyond Europe. But it is important not to look at the whole of the CEE region as “potential Hungaries”. Seeing the entire region through a very narrow lens limits our ability to make sense of much of it.

Not all that is bad about democracy in Central and Eastern Europe is an effect of backsliding or a sign of incipient backsliding. As Hirschman reminds us, “large-scale social change typically occurs as a result of a unique constellation of highly disparate events and is therefore amenable to paradigmatic thinking only in a very special sense.” This applies both to CEE states unfortunate enough to exemplify the backsliding paradigm and to the less well reflected upon journeys of those that do not.

A longer, fully referenced version of this piece has been uploaded as a working paper in the APSA pre-print service here. The authors welcome comments and feedback.

Catalonia and Spain: Will the referendum on independence go ahead?

Beyond Brexit: How the OECD could replace the EU as a driver of UK public policy