Former UK Foreign Secretary Boris Johnson generated controversy in August when he used the terms ‘letter boxes’ and ‘bank robbers’ to describe Muslim women in burkas. Anna Gawlewicz and Kasia Narkowicz argue that while Johnson received a great deal of criticism in the UK for his comments, the use of such language also has the potential to travel internationally with migrants, normalising discrimination in other countries.

In a Telegraph column on 5 August, Boris Johnson described Muslim women in burkas as ‘letter boxes’ and ‘bank robbers’. The outrage was immediate: posts, tweets, comments, news pieces, even a condemning speech from the UK Prime Minister Theresa May. The former Foreign Secretary and Mayor of London refused to apologise.

The heated debate around Johnson’s comments has parallels in other countries. Our research in Poland and with Polish migrants in the UK shows that this language is more problematic than we think and travels across national borders. Johnson’s comments were familiar to us: it was the very same language that some of our research participants had used in interviews. As part of our doctoral projects, we spoke to 72 Polish people in the UK and Poland about their attitudes towards ‘difference’. Discussions about Muslim women were very common with language playing a key role in expressing these feelings.

The trope of the burka as a ‘letter box’ seems to be an old islamophobic ‘joke’ that until the Johnson affair, and apart from in our interviews, we had seen mostly on nationalist or anti-Muslim blogs and social media. The ‘joke’ apparently goes: ‘What do you do when a Muslim woman knocks on your door? Talk to her through the letter box and see how she likes it!’ The same joke is sometimes illustrated with a letter being pushed through the niqab, as if the space for the eyes in the face veil is mistaken for a letter box. 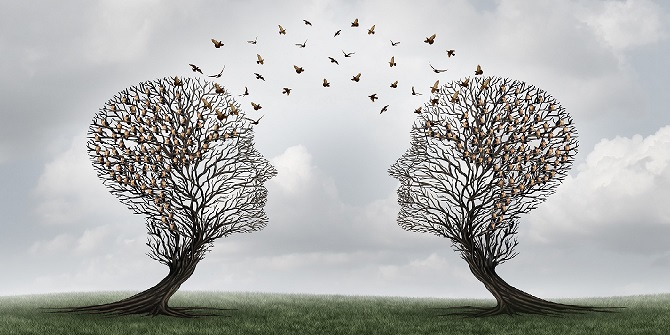 In Poland, where we conducted part of our research, violence against Muslims and their places of worship have escalated dramatically in recent years. During the interviews we conducted, many used language of stigma when talking about Muslim women. Some referred to the Muslim veil as a potential threat, echoing Boris Johnson’s reference to ‘bank robbers’.

Some Poles that we interviewed in the UK also described Muslim women as ‘letter boxes’. When asked how they learned these expressions, they pointed to their British colleagues and friends, and other Polish migrants. Apart from the expression ‘letter box’, we found that they had also picked up other slurs. What we further established was that many of our migrant participants stayed in touch with their relatives and friends in Poland and exchanged these expressions in casual conversations. In some cases, non-migrants in Poland hadn’t known these terms before and started using them assuming their validity and correctness (following the principle that migrants ‘know better’ because they live abroad). This led to a vicious circle: migrants picking up the language of stigma in the UK and transmitting it to Poland; non-migrants in Poland believing that this language was appropriate and therefore using it too.

This illustrates that language, like that used by Johnson, travels across national borders with migrants. It spreads and reaches new people and places. It gets popular, gains currency and circulates in a complex process with many actors. In doing so, it not only contributes to the normalisation of Islamophobia among the British public (as we have already seen), but also has a strong legitimising force in ‘other’ places and societies.

In Poland, for example, a country where there’s little contact with difference and nationalistic sentiments are on the rise, there’s limited scope to challenge such language when it’s exported because exported language carries symbolic capital – it comes from ‘experts’, those Poles abroad who are assumed to know how it really is. As a result, a single ‘joke’ by a mainstream politician like Johnson can contribute to the reinforcement of global Islamophobia and may translate to an increase in discrimination, exclusion, and perhaps even hate crime in ‘other’ places.

Note: This article gives the views of the authors, not the position of EUROPP – European Politics and Policy or the London School of Economics. Featured image credit: Hernán Piñera (CC BY-SA 2.0)