Federica Mogherini recently outlined a new EU strategy for improving connectivity between Europe and Asia. Thomas Kruessmann examines the proposals, which are widely viewed as a response to the ‘Belt and Road’ initiative launched by China in 2013. He argues that the overall direction of the strategy is misguided and that it largely ignores the potential to capitalise on improvements in Europe-Asia connectivity which have already been made in the last few years.

On 19 September, Federica Mogherini unveiled a Joint Communication entitled “Connecting Europe and Asia – Building Blocks for an EU Strategy”. As the title acknowledges, the document is meant to contain mere “building blocks”, designed to support the 12th Asia-Europe Meeting (ASEM) that will be held in Brussels in October. However, the ambitions behind this process are more far-reaching, on the one hand aiming at an EU Strategy on Connecting Europe and Asia, while on the other hand providing some key ideas for the Multiannual Financial Framework for 2021-2027.

For several years now, China has been pushing its ‘Belt and Road’ initiative forward. In a geopolitical transformation that was unthinkable only two decades ago, Central Asia (primarily Kazakhstan), Azerbaijan, Georgia and Turkey have been collectively re-defining themselves as a transport corridor to connect Caspian oil and gas, but also container freight from China to Europe.

While the accessibility of oil and gas from the Caspian Sea has been fairly central to the EU’s diversification and energy security strategy, the combined rail/road/ship traffic that is now possible with the Baku-Tbilisi-Kars railway as its centre piece did not originally feature in the EU Commission’s Trans-European Transport Network concept. The scramble to find more efficient ways of transporting goods from Asia (primarily China) to Europe has also been intensified by some initial successful attempts to use the Northern Sea Route for commercial shipping purposes. So, while from the perspective of the wider Caucasus groundbreaking developments have been taking place over the past couple of years, it is only now that the EU is waking up to the notion of EU-Asia connectivity.

Perhaps the most striking feature of the Joint Communication is its disregard for the processes that have been taking place so far and that have mainly revolved around China. The Joint Communication emphasises “Asia” as a diverse region, roughly distinguishing between China, Japan and South Eastern Asia. South Korea, despite its economic weight, is not specifically addressed. What drives the European Commission is obviously not the business logic of bringing down costs, shortening shipping time and creating spin-offs for manufacturing, but rather a political goal: to foster “a more cooperative approach to world politics, global stability and regional economic prosperity”. The emphasis is clearly on the political and using “the European way” as a tool for branding. 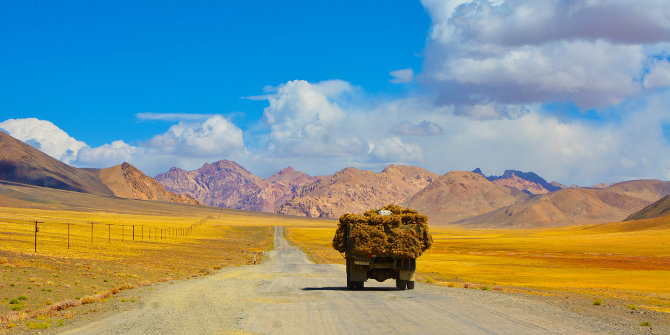 No doubt, “connectivity” is about to become the Commission’s news buzzword. While the Chinese initiative is driven by the commercial logic of “selling”, the EU’s proposal is driven by the logic of “investing”. From the perspective of the countries in between, this may not be good news. Of course, transport corridors require enormous investments. Much has been shouldered by the countries concerned, but now that the basic infrastructure is in place, there will be additional huge demands for investment to create e-governance to simplify border-crossing procedures, “flow security” to protect the critical infrastructure against (cyber) attacks, and so on. Countries in the wider Caucasus understand that the Chinese initiative with its focus on “selling” is beneficial to them because it is not merely about channeling final products to consumers in the wealthy markets of the EU, but also about bringing semi-products to the countries which have tariff-free access to the EU internal market (e.g. Georgia, Turkey) and fostering value-adding manufacturing along the transport routes, e.g. in special economic zones.

The EU proposal, by contrast, largely ignores the degree of connectivity which has already been achieved and the critical benefits that could be derived from strengthening it. In her press conference, Mogherini emphasised that “our approach is confident enough… not to measure our proposals as reactions to others”. Adding that “there might be differences, there might be points in common.” Certain benefits for the European Neighbourhood are explicitly mentioned, such as promoting the digitalisation and administrative simplification of maritime transport in the Black Sea countries. The Communication also explains that agreement has been reached on extending the Trans-European Transport Network to the six Eastern Partnership countries including Armenia, Azerbaijan and Georgia. But the main thrust of the initiative is about promoting investment for infrastructure projects in Asia, thereby pulling EU companies along and giving them additional business opportunities.

This strategy could probably be tried in many other places across the world where high investment needs exist and there is sympathy for the European spirit of building global partnerships. However, the stated initiative is a long-term project with distant benefits, launched at a time when a nearly identical geopolitical project is changing the face of Europe-Asia relations. It will be left to political decision-makers to weigh the costs and benefits, but at a time when Europe-Asia connectivity is beginning to bring strong benefits to the “in-betweens” of the European Neighbourhood, as well as to Turkey, the Commission’s current approach sets its sights on the rather distant Asian countries, treating the “in-betweens” merely as secondary recipients of technical assistance.

The second point to be raised is the idea of building connectivity “the European way”: in a sustainable, comprehensive and rules-based manner. In a situation where competing connectivity initiatives are already at an advanced stage, one cannot help but ask what exactly this message is designed to convey. Is it just branding an initiative to find favour with potential partners, or is there indeed a qualitative difference, indicating some superior solution?

Indeed, the Joint Communication’s message is rather disturbing. In describing what is meant by “the European way”, the text starts out by praising the EU’s internal market as a connectivity project par excellence. In other words, what the free flow of people, goods, services and capital is for the internal market, shall be achieved through connectivity globally.

“The EU internal market has led to increased productivity and competitiveness and can be a source of inspiration globally. [The] EU’s connectivity policies aim at promoting efficiency in the EU single market and enhancing connectivity on a global scale.”

In other words, there is connectivity between EU member states which is normally understood to be the internal market, and there is connectivity on a global scale which is more than trade and for which we don’t have a fitting term yet. This brash assumption is rather mind-boggling. True enough, if the Commission is serious about its proposal, it is no longer discussing trade, but an integration of economic spaces based on the four freedoms. Promoting trade alone will have its spill-over effects, e.g. in standard-setting, common rules and the simplification of procedures. But it is not nearly equal to the spill-over effects that the four freedoms create and as a result of which the EU is now not merely an economic union and an internal market, but a partly integrated political player.

Ironically, despite the EU not even being able to standardise power plugs, the European Commission is dreaming about connectivity between the EU and Asia on a grand scale. And while there is nothing wrong with the vision, facilitating trade in the light of climate change and decarbonisation is already a tall order. Going beyond bears a heavy risk of over-stretching and killing off a welcome initiative through unrealistic goals. Due to the geography of Europe, there is indeed a compelling case for harmonising safety and security rules, e.g. by prescribing maximum work hours for lorry drivers. But in identifying this internal market rule as a feature of connectivity per se and proclaiming that “connectivity has a crucial human dimension and people’s interests and rights should be at the core of any policy”, the Commission risks finding itself in a debate about Kazakh lorry drivers’ working hours when it should be establishing intelligent infrastructure for intermodal freight transport first.

To conclude, the problem with this Joint Communication is not that it is proposing “building blocks” that could be picked and combined in any possible fashion. Instead, it is placing these building blocks into an overall policy direction that is misguided, creates the wrong emphasis, and misses the opportunity to capitalise on the already existing developments towards Europe-Asia connectivity.